I’m back east this week and had some spare time so thought I would take an excursion up to Mount Washington.  I really didn’t know a lot about the place other than it’s the Northeast’s highest peak and many of the local elite runners head there at the beginning of June each year to compete in the Mount Washington Road Race.  I now understand why they run up the auto road and not the trails!

Before heading up, I did do a little searching on the web and found some brief descriptions on the trails up to the summit.  I decided to go up from the west side of the mountain starting off at the Cog.  I figured hey, I was used to that so I should probably start there.  Plus, it saved about 30 miles of driving around to the east side.  Well, lesson learned!  I should’ve definitely done some more research or at least read the short descriptions of these trails a little closer.

I headed up the Ammonoosuc Ravine Trail which starts at the Cog parking lot at an elevation of 2500 feet and travels up 3.1 miles to the Appalachian Mountain Club’s Lakes of the Clouds Hut at 5012 feet.  The trail starts out climbing moderately over some pretty rough terrain that parallels a creek.  You climb up to Gem Pool and then up the headwall of the ravine across some steep, rough, rocky terrain which also includes several stream crossings.  You break the tree line just below the Hut and have a great view over the tree covered White Mountains. 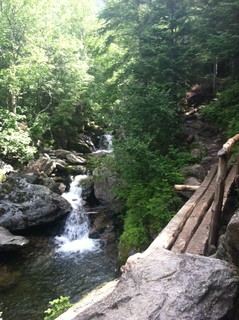 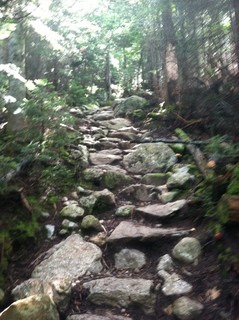 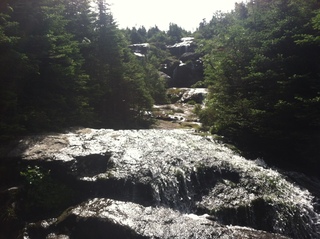 From the Hut, you follow the Crawford Path northward for another 1.4 miles to the summit of Mount Washington at 6288 feet.  The trail up really wasn’t runnable, but I at least fast hiked it to get some resemblance of workout.  I stopped in the Hut to about the Jewel Trail as I was hoping it wouldn’t be quite so technical, and perhaps I could run some of it down.  I was told it wasn’t quite as steep because it was a little longer and traversed around the mountain a bit more.  That’s all I wanted to hear.  I knew I wasn’t going back down the same way I came up. I made it up to the summit.  Took a few photos and made a quick stop into the snack bar.  Much to my surprise, NO DONUTS!  What’s up with that?!  Oh yeah, wrong mountain.  I did grab a Cliff Bar and another bottle of water before starting my trek down.  The clouds were rolling in and it was getting cool, so didn’t want to hang out too long. 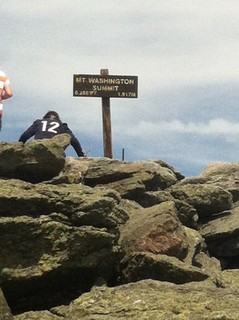 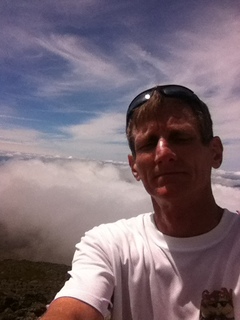 So, I started down the Trinity Trail from the top of the summit.  Can you see a trail here?  I sure couldn’t!  But they were kind enough to pile up some rocks to let me know that at least I was headed in the right direction. 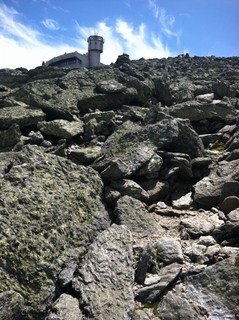 From the Trinity, I cut over on the Gulfside Trail to the Jewel Trail to head back down to the Cog station.  The description of this trail was accurate in that it wasn’t as steep as the Ammonoosuc, but coming down it sucked!  The upper part was basically traversing rocky alpine terrain and the lower section through the forest wasn’t much better as there were still all most as many rocks and now also had an abundance of tree roots to deal with.  Needless to say, I had to watch every step and it was pretty slow going.  I think it took me longer to come down than it did to ascend the mountain.  And the descent was definitely rough on my knees and ankle. 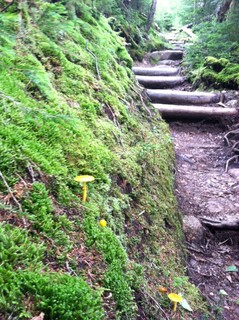 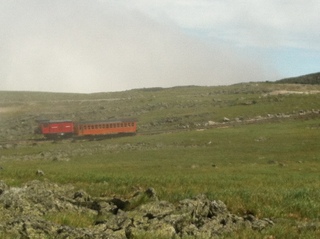 I checked Mount Washington off my list.  If I ever decide to do it again, I think I’ll sign up for the Road Race. 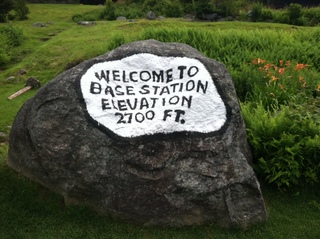 Would've definitely preferred to go down the road Ann, but the 30 miles back around the mountain to my car would've been a bit much :)  The clouds were rolling in, but was able to at least see the next cairn.  It was a beautiful hike though!

Hey Dave - we hiked it 3 years ago in early June, and snow was still prominent in Tuckerman's Ravine area. I'll have to look up the exact trail we took up, but your pics and description fit it well ... lots of rocks, roots, and steep step-ups - definitely not runnable!!  Once we hit the boulder field, it was tough to see where the trail went, but like you said, cairns showed the way. Heavy dense fog moved in while we were on top, and having NO clue where the trails were, and no way of seeing them or cairns, and knowing that mountain's history with respect to weather, we opted to trot down the road instead for our descent. Thanks for the revisit!! :)