Keepin' My Pancakes on the Rocks: Food for Thought

I enjoyed some real solid training under my feet during this past week and have had a nice streak of running since the SUMMER ROUNDUP. For the Tuesday/Thursday Sunrise Strider tempo runs and interval workouts, I'm happily welcoming the return of my pre San Juan 50 form. Riding this high, I was also able to work in a great running weekend around Pikes Peak. Saturday offered some good time on the backside as I knocked out 21 miles with CRUD as we tagged the PANCAKE ROCKS and then doubled back to make our way up to DEVIL'S PLAYGROUND. Feeling fresh as my feet touched the floor at 6 am the next day, I rode up to Elk Park with Paul Doyle, ran to the summit, and then cruised back down to Manitou to add another quarter century to the week's tally. 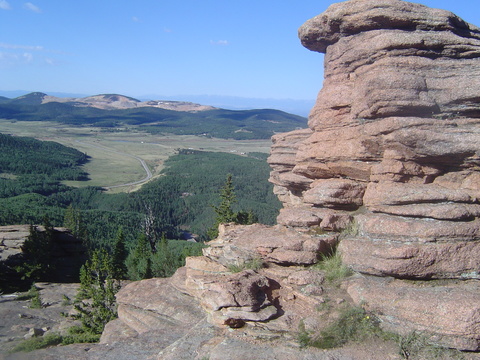 In light of the PANCAKE ROCKS reference, I thought it'd be a good week to blog about my food and nutrition philosophy. Oddly enough, for a runner who enjoys ultra distances, I typically avoid pancakes (unless made with almond meal). I also make a point to avoid all grains including bread, pasta, rice, oatmeal, corn products, cereal, and couscous. Most of the time, I'll also steer clear of legumes (except peanut butter to which I'm addicted), and dairy products which further limit my options at the cafeteria.

"Well what do you eat?" is a question that I'm becoming more and more accustomed to addressing. But perhaps before I answer that, I think "Why do you eat what you eat?" is a better place to start.

Like Lee Rhodes' An Experiment of One, the following tale is merely my story, not medical advice. This all began in 2006 when I began noticing an ebbing and flowing of worsening GI symptoms during my training runs. The wakeup call for me however, didn't come until mile 16 of the 2006 Outer Banks Marathon. At that point, I was desperately scanning for a green, rectangular beacon of hope, but that porta-john oasis was nowhere in sight. And with on a flat road section with little in the way to cloak nature's call, lady luck was definitely not on my side. On the brink of hysteria and with the eyes of a mad man, I dodged into a Food Lion off of the course, stormed to the back of the store, and tore open the stall. I'll spare you from as many gruesome details as possible but whatever initial relief I experienced was quickly supplanted by horror after gazing down into the porcelain wishing well. In essence, it looked like the result of someone flossing my insides with barbed wire. I DNF'd that race (my only one) and after a handful (pun intended) of digital exams, sigmoidoscopies, and colonoscopies, was branded with the inflammatory bowel disease, ULCERATIVE COLITIS, at age 23.

During the years since, I've been on a multitude of different pharmaceutical agents which have been delivered through a variety of administration routes from head to bum. Some meds are strictly for flare-ups and others are taken continuously regardless of remission or flares. A doctor told me UC is a "disease of inconvenience" which for me has meant "going to see a man about a horse" in excess of 15 times a day during flare ups. Obviously, such a schedule can really interfere with all aspects of personal and professional life. But what has bothered me even more than the revolving door to my bathroom is the increased risk of colon cancer after 10 years and the possibility of toting a colostomy bag around if the disease progresses.

Another tipping point came in February of 2011. In light of an inability to get my symptoms under control, my GI doc suggested putting me on a more aggressive medication that carried with it a risk of lymphoma.  Now, I'm not a big pharmaceutical person to begin with. I don't take vitamins and I enjoy 1 or 2 ibuprofen a year. Faced with this option though, I did what anyone this day in age would do... I hit the internet for some researching!

I had some doctors tell me that diet was unrelated and others tell me to adhere to a "low residue" diet like the Mediterraneans follow. Even though I didn't find satisfactory results with either approach, it sparked my curiosity about food's role in the disease process. As the name "colitis" implies, colon inflammation is one of the hallmarks of the disease. Thus, I began searching for low or non-inflammatory diets. I happened upon the Simple Carbohydrate Diet (SCD) that presented some success stories but seemed a bit too restrictive, disallowing grains, lactose, sucrose, and all starchy foods (including potatoes). As a runner, I was hesitant cutting back on carbs but thought if I could still enjoy sweet potatoes and other starchy vegetables, maybe ousting grains wouldn't be too bad.

After more surfing, I discovered the PALEO DIET FOR ATHLETES and MARK SISSON'S PRIMAL BLUEPRINT. I won't get into the details differentiating the two but thankfully I've found a combination of approaches that seems to be working for me. Essentially, my body seems to do best with fruits, veggies, eggs, and meats (oh and peanut butter too). It's not a perfect system as I've certainly had my fair share of times when I've enjoyed a beer or some chips and salsa. But I can say with absolute certainty that there's a direct correlation between my worsening symptoms and those times when I indulge. Once I return to the caveman style of eating though, my insides settle and everything is right with the world again. Thankfully, the one exception to this rule happens during races or training when it seems I can tolerate most aid station foodstuffs without immediate or delayed adverse effects.

I continue to take my regular maintenance medication (one instead of three that I was taking) and since implementing the dietary changes, I haven't had a flare-up in almost 6 months (at least a 2 year best!). Another concern, albeit a relatively inconsequential one given the talk of cancer and colostomy bags, was how my running performance would be impacted now that I was going grainless. Although it's possible, I can't definitively say that it has made me faster or boosted my endurance, but I don't believed its hurt me in any way either. With that said, I also haven't had to seek mid-race solace in a grocery store which definitely helps bring the race times down!

Comment by Peter Stapanowich on July 25, 2011 at 6:37am
Way to impart information for others . I love the musical clip.