Ok Tim, so it’s a little late BUT the last time I wrote a blog about a marathon I DNF’d. Naturally I’m a bit reluctant to do that again but a promise is a promise so here goes nothing…

Bound and determined to write something about running that one if not both of my brothers would read I asked each of them to name their three most favorite things.  One said girls, hot girls and mayonnaise and the other said good chocolate, good beer, family visiting in Nicalandia, good food and my new backpack (three wasn’t enough). I guess when I get around to writing about our Nicaragua adventures and the Fuego y Agua race I might get the attention of one brother. Suffice to say there is little the Boston Marathon has in common with mayonnaise and chocolate, but some may argue there is a place for the hot girls and good beer but I digress… 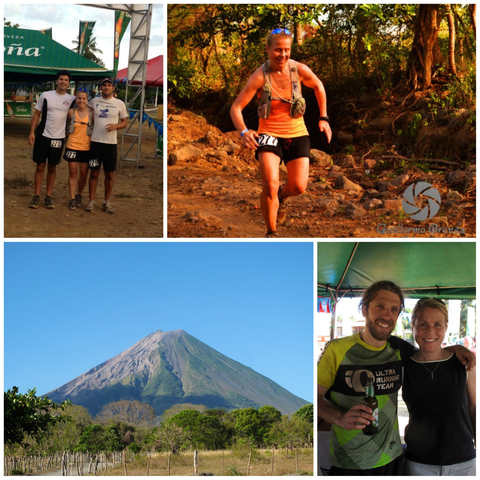 Fuego y Agua - Nicaragua with the brothers and Nick Clark, King of the Jungle

I have spent much of the last year and a half recovering from a torn gluteus medius. This supremely irritating injury likely would have healed in 6-8 weeks had I actually rested and stopped running. But I didn’t. Instead, I managed to run five marathons (OMG) one qualified me for the upcoming Boston Marathon, travelled on to San Francisco to shuffle through the Nike Women’s Marathon, the next one I met Walrus Man, one was overshadowed by the fantastic post-race pub crawl and the last (PPM) was a train wreck...go figure.  I crossed the Grand Canyon, on foot, twice. Amazing! I found Mt. Sopris and the summits of four new 14,000 ft. mountains, I shuffled my way through the Imogene Pass Run, paced a few friends through some 100 milers and managed to finish a handful of shorter races much closer to the back of the pack that I am accustomed to being. I don’t tend to frequent the front of the pack but I do always have my sights set on those 9 year olds that I feel compelled to run down in the last quarter mile. You know it’s bad when you can’t even stay in front of the mythical walrus. FINALLY the hip improved but I found myself relatively out of shape, slow and getting chunky. No bueno. With Boston looming I figured I should probably try to get what little speed I once had back and perhaps put a little structure into my training to avoid ending up injured again. 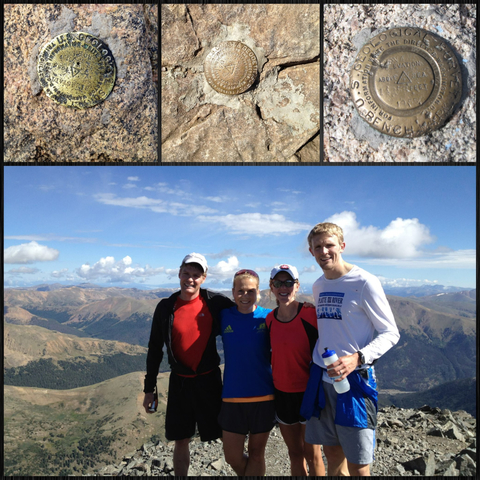 Summit of Torrey's with Kim and Corey Dobson 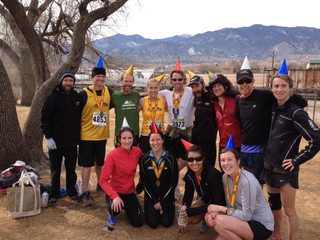 I could lay out my training since October but that would be terrifically boring and the two people still reading this would go back to surfing Facebook. Long story short, my friend Kim offered to put together a training plan for me and I signed up for a couple ½ marathons along with the shorter winter series races. Some of you may have heard of Kim after she annihilated the Pikes Peak Ascent course record by over 8 minutes that was set back in 1981. Not to mention the winning of the Mt. Washington Ascent with the second fastest female time in history or qualifying for the Olympic trials in the marathon...to name a few.  All of which lead to the much deserved honor of Trail Runner of the Year for 2012.  I could go on and on but no matter how proud of Kim I am, I still won't be able to run a 2:45 marathon.  However, because of her experience and the time and effort she has put into my training since October I have set some new PR's, won a 25k and run more miles harder and faster that I ever thought possible AND I'm injury free.  Holla! She has made me work...hard.  She has reeled me in when I start to get a little big for my britches and taught me patience.  I am confident of one thing for Monday, I will toe the line stronger, fitter, faster and more confident because of Kim.  Compound that with the countless reminders from John at CRC  to “not do anything stupid, and stick to the plan” and I might actually be ready to brave this thing.  So here I am, still working on being comfortable with the uncomfortable and pushing limits and now less than a week from toeing the line in Beantown and I’m terrified. But as my friend Sean says…”It’s just running.” He’s right. But the minute I start to relax in comes another Boston Marathon email or this little reminder of the pain involved in road marathons, starring our very own Brandon Stapanowich...the music is amazing!

I leave on Saturday and will join a few other runners from the Springs as well as more than a dozen friends spanning from Boston to California. Many of us are running for the first time and some run it every year, religiously. We all have different goals. Local elite, Mario Macias will likely try to stay with the lead group whereas most will go with a goal time they want to meet or beat. My friend Ron will serve as an Achilles guide leading a blind runner to what they hope to be a 4 hour marathon. Josh will run his second Boston and will shoot for a 2:50 or at least a 2:52:59 so as to beat JT's PR once and for all. Liz, the misplaced trail runner, is shooting to go under 3:30 which could be a great PR and grand finale to what she claims to be her last road marathon…that’s what they all say. Perhaps my friend Dan will end up in another Runner’s World article: Run Faster In Boston

As for me, I have made a promise not to go out too fast. I have reiterated that promise over and over…and over. The only 10k I should PR is the last and if I pull that off, well drinks are on me! With that said, who doesn’t want a PR?!  I’ve also promised Clarky I'll blow up trying…ha. We shall see how that one pans out.

Want to watch the race live? Rumor has it JT took the day off, so head on over to his house and see him lose his mind as Josh runs like hell to a 2:50!

GOOD LUCK to all of the 2013 Boston runners.  I look forward to toeing the line with you in just a few days and then hobbling about afterwards!

Here are a few more photos of the last year or so... 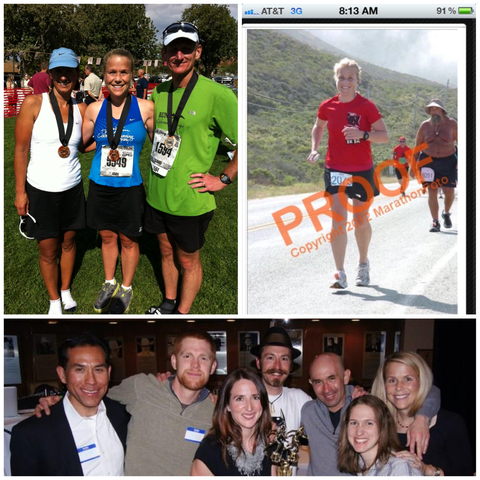 Left: Sonya Dave and I after the St. George Marathon - all qualified for Boston 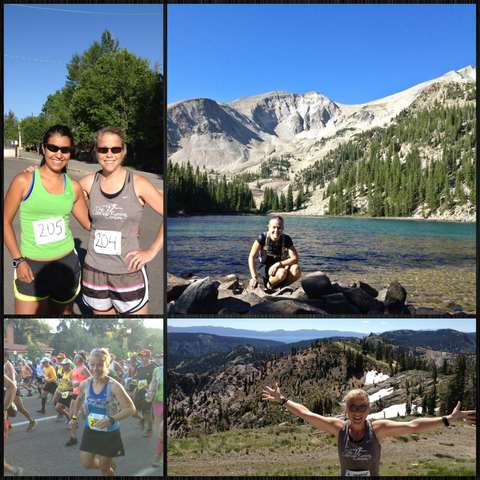 Upper Left: Liz and I with our handmade bibs at FIBArk 10k

Lower Right: Looking a little sheepish as I try to complete the PPM without properly training...or training

Lower Left: Finish of the 6k at the top of Squaw Valley Ski Resort the day before WS100

Great write up, Amy! I love it when Brandon crawls on the ground! Have fun in Boston and don't forget to try the Sam Adams 26.2 Boston Marathon beer, it's delicious!

If you want to win: Remember what I said about the lead pipe!

Good luck in Boston!  That video of Brandon just isn't right.  Had to crawl across the finish and still crushed my time.  Enjoy the spectacle!