Rebecca Rusch, a well known figure in the endurance biking world, was giving a short talk the night before the Dirty Kanza.  She was speaking about the self doubt some of us would face the next day.  She told us of a "friend rule" she follows for whenever the voices in her head start telling her she sucks.  Whenever these voices pop up, telling her she should quit or she's a loser or she is a lousy athlete, she asks herself, "Would I speak to a friend like this?  Would I tell a friend she's a loser?"  After the talk I had to laugh, because I treat my friends much worse than I treat myself.

The Dirty Kanza is a 200 mile bike race that starts and ends in Emporia, Kansas, an eight hour drive directly east of Colorado Springs.  99% gravel roads, the course winds all over the Flint Hills.  Over multiple beers at some point last year, some friends and I thought it would be a great challenge and we all agreed to sign up.  I followed through, they didn't.  Jerks. But instead of bailing, I decided to give the DK a shot.  Training hadn't gone nearly as well as I'd have liked, mostly due to the late winter we had in the Springs.  I hate biking long distances in the cold, so I just didn't put in the miles.  I got in two rides of 65ish miles, and the rest of my riding was to and from work.  My commute home often takes me up Cheyenne Canon, which is nothing to sneeze at, but at 20 miles it's nowhere near the work I should have been doing.

I talked with lots of folks about the ride, and most of the advice I got was along the lines of "just keep pedaling and you'll be fine."  In reality that's all you have to do to finish any bike race, but when one finds themselves in the middle of nowhere on a hot day, dead tired from a ton of miles rode and having to ride a ton more miles, that advice ain't quite so easy to follow.

The first leg, leaving Emporia and traveling 48 miles to the tiny town of Madison, went well for me.  Due to a brief but powerful thunderstorm a few hours before the start, there was a lot of water and mud over the first few miles.  I would later hear that 150 of the 1000 who started the race had to drop during the first 10K due to mechanical issues.  I took note of quite a few very expensive bikes on the side of the road during this stretch.  I was riding my Salsa El Mariachi hardtail 29er, which can handle anything, and it was eye opening to see some bikes costing five times as much as mine tanking less than 3% into the race.

To finish, you need to average 10mph, and I came into the first aid station well ahead of schedule.  I thought about skipping this aid station to pick up some more time, but at the last moment I decided to stop and fill up on water.  I didn't know it at the time, but this was one of the few good decisions I would make all day.  Left the aid station and started the 55 mile leg south to the town of Eureka.

Things started to hurt on the second leg.  My speed had slowed as the day started to get hot.  Nothing on this entire course is considered technical mountain biking, it's all about putting your head down and continuing to move forward.  But now, besides dealing with the heat, we were dealing with a steady and demoralizing wind.  And then, with about an hour left to go until I hit the aid station, I ran out of water.  I couldn't believe it, as I tend not to need a lot of water at these longer distance events, and I was shocked by the fact that I had consumed three liters over 45 miles and needed more.

I limped into Eureka, mile 103ish, in just under eight hours.  I wasn't in terrible shape, but I sensed that things were about to go bad very quickly.  This was the farthest I had ever rode a bike, and I still had to ride farther than that to finish.  I realized the second half wasn't going to be as easy as I hoped.

The third leg was a 59 mile ride back to the town of Madison.  I left just before 2PM and the heat was brutal.  Just a few miles out from the aid station I started suffering badly.  I kept trying to join up with a pace line, but with my heavy bike and thick tires and lack of conditioning I just couldn't keep up.  So I was left to deal with the race by myself.  I kept replaying the "just keep pedaling" mantra in my head, but that was getting tougher and tougher as I was being crushed by the sun and the wind and the rolling hills.  The thought of quitting definitely crossed my mind, but even that would have been difficult.  First, I would have needed to find cell service.  Then, I would have needed to communicate where I was, no simple task from the middle of nowhere where all I had been looking at for 12+ hours was a gravel road and endless fields of grass.  So while I fantasized about dropping I kept cranking out the miles.

And then, with about two hours to go until the next aid station, I ran out of water again.  I didn't panic, but I was definitely worried about this situation.  In Colorado, I sometimes justify drinking out of a stream by telling myself "look how clean and fresh this stream looks, it can't possibly be bad water."  There was none of that in Kansas, and my only option was to drink from a stagnant pool that had lots of cow patties around.  But I had a choice to make: don't drink the water and quit the race, or drink the water, finish the race, and sit on the toilet for a few days.  As I filled my Osprey bladder, I realized this was probably one of the grossest things I had ever done.  (note: I didn't get giardia!)

Finally, after what seemed like forever, I slowly rolled into the final checkpoint.  I was not doing well, but I knew if I could just get out of this aid station I would finish.  I took my only big break of the day here, taking 30 minutes to eat hot dogs and pull myself back together.  And drink whiskey. 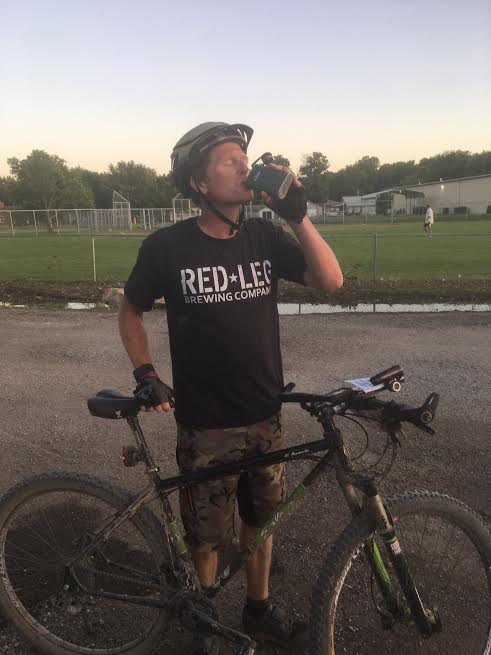 Physically I started to feel better after leaving Madison.  But just when I thought the finish was a done deal I added some drama to the equation.  I didn't think this race would take me so long, so I didn't think I would be riding at night for more than an hour or so.  I had packed my tiny commuter light, which I knew could last an hour but I had no idea if it could last the three hours I'd need light.  So I got to stress out about that over the final 30 miles, but that might have helped by taking my mind off how much pain I was in.

After what seemed like a week, I returned to Emporia.  The town was still hopping despite my 12:30AM finish.  I have never been so happy to get off a bike before.  They give you a pint glass for finishing, and my wife and I immediately headed to Mulready's.  It was a great scene, with the majority of patrons covered in sweat and dust and celebrating their finish.  The bartenders were more than happy to allow us to use our new pint glasses. 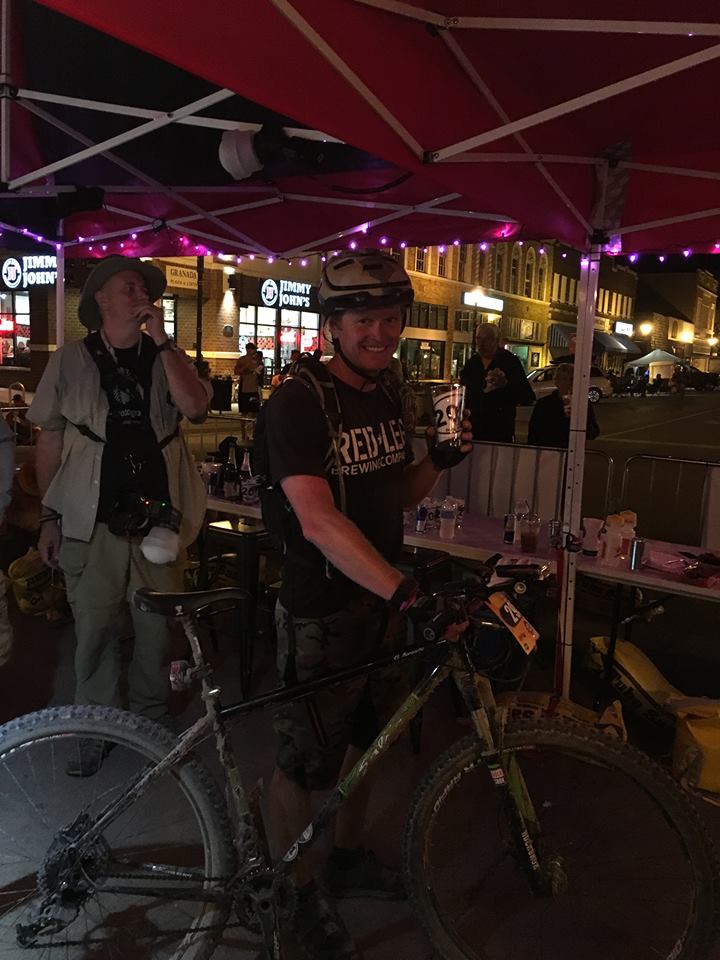 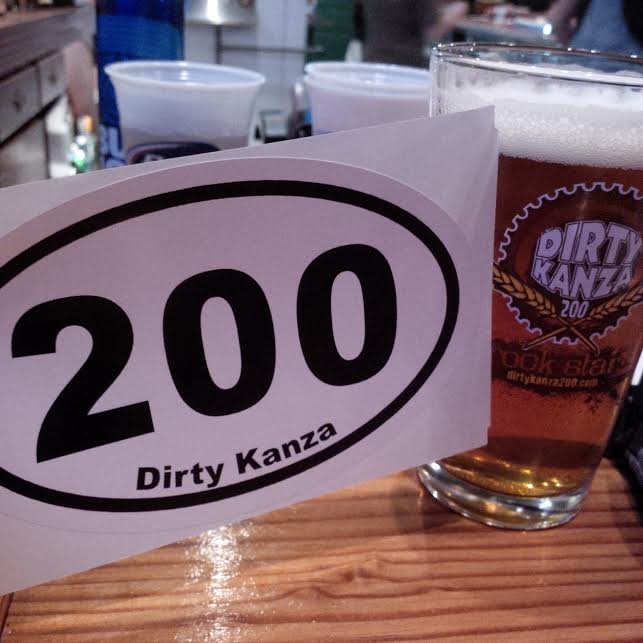 And now my long distance biking career comes to an end after one race.  I'm glad I was able to finish this, and especially glad I can wear the t-shirt in front of all my friends who chickened out, but there were very few parts that I thought were fun.  I'll keep my biking to linking up local trails with breweries.