Back in February when I started training for the Garden of the Gods 10 Mile Race coming up on June 12th, several runner friends suggested I participate in other races to prepare myself.  I took their advice and ran the St. Patrick's 5K in March.  Even though it was my first race and kind of tough, I felt exhilirated afterwards!  I was so proud of myself for finishing, I couldn't wait for the next one!  So I signed up for the Take 5 in the Garden, conquering 5 miles with my fellow running buddy, Lisa Darden.  They played "Shout!" on the stereo speakers as we neared the finish line, and the song nailed my emotions exactly!  I was so high, I felt like I could fly to the end, shouting the entire way!

The next race I registered for was the Bolder Boulder 10K.  Many women on my running team recommended it and regaled me with tales of the Slip-n-Slide, free beer, free chocolate-covered strawberries, and the party at the stadium afterwards.  I couldn't wait!  I made plans weeks ahead with my friend Teresa to drive up the day before, get a hotel, and have dinner with a former high school classmate.  Since my running buddy Lisa was going to run with me, I airbrushed some t-shirts for us to wear:  I would be the "Tortoise," and she would be the "Hare."  I saved the front of my t-shirt to collect good luck signatures from friends, coworkers, and family.  I purchased tutus to complete our costumes.  The weekend was going to be fun-filled and fabulous!

Unfortunately, things changed drastically before race day arrived.  Lisa was having some serious leg pain and had to cancel.  She could barely walk 2 miles, let alone run 6.2 on race day.  Teresa had a friend with an apartment in Denver where we could crash overnight to save on hotel costs, but unfortunately, Teresa changed her mind at the last minute and decided not to go.  So it was just li'l ol' me, The Tortoise, making her way to Boulder all by herself, to run alone, in the Bolder Boulder for the first time.

Do you feel sorry for me yet?

Cruising through Denver very early the morning of the race, a police motorcycle pulled out of the median after I passed and I glanced down at my speedometer:  70 in a 55!  Who knew?  I was just keeping up with traffic!  I've never gotten a speeding ticket, but I guess today would be my first.  I tried to imagine what the cop would say as he asked for my license and registration:  "Um, excuse me, ma'am.  What's with the tubey hat and lime green tutu?"  "Oh, I'm dressed as a Tortoise to run in the Bolder Boulder for the first time, officer.  Don't you want to cut me a break and only issue a warning?"  Luckily, he pulled over a different car (must've been the lucky rabbit's foot--er, shirt--I had in my backpack!).  What an adrenaline rush that was!  If I didn't have the pre-race jitters before, I sure had them now!

Traffic wasn't too bad--it got a little congested a few miles before my exit, but I easily found parking and prepared to walk the few blocks to the starting line.  A young woman complimented me on my costume, so I asked if I could join them since I didn't know where I was going.  She introduced me to her crew, and we fell into an easy conversation about the race.  (Note to self:  Next time, pay closer attention to where I park so I won't get lost after the race.)

My start time for the "MH" wave was 8:33:30, so I had about an hour before the race gun fired.  I wished my new friends good luck as we parted at the porta-potties (their race wave was much sooner).  I spied a barefoot runner while standing in line--more power to you, dude!

As our wave moved closer and closer to the Starting Line, my fellow MHers grew antsy along with me as we took pictures of each other, Tweeted, and Facebooked about the experience.  Then the clouds broke loose!  We shared a collective "Aaaahhhhhh!" but the rain cleared within minutes.  Right on time, our wave took off, and I couldn't believe I was here!  The crowds were thick and it was difficult maneuvering in and out of the walkers and slower joggers.  The bands along the race route entertained us along with stilts walkers, belly dancers, drummers, and cheering spectators.  This was truly a city-wide cultural event!

I liked how the race was marked off in kilometers and miles.  Even the highest point was marked with a banner crossing the street.  Spirits soared, cameras flashed, water sprinkled, beer flowed.  I was amazed at the number of young children who participated!  There weren't as many costumes as the St. Patrick's race, but they were great.  I even saw Santa Claus, the Teletubbies, and full-body cat suits!

Spectators camped out in their yards in the residential areas, and the closer we got to the finish, the more people lined the streets.  People held signs, beat tamborines, played drums, cheered and shouted, and just like with the Take 5, it felt like they were all cheering for ME!  It's no surprise runners get addicted to the whole race thing!  As we rounded the last half mile en masse toward the Folsom Field entrance, I was impressed with the sheer numbers of runners and spectators!

Running into the stadium, the cheering lifted my spirits.  I videotaped the last 10 seconds or so because I wanted to remember the moment forever.  I charged across the Finish Line and congratulated myself on a job well done.  No pain, either!  Dare I say it was the easiest race I've ever run?  It only felt like 3 miles, not 6.2!

It wasn't until I climbed the stairs to find a seat that I became painfully aware that I was alone, save all the signatures on my t-shirt, that is.  I missed Lisa and being able to share our Finish together.  I missed scanning the crowds for Teresa cheering me on as I entered the stadium, and the chance for all of us to hang out afterwards.  Oh well, I went to find the Expo and get a free fruit bar popsicle sample!  LOL  I even got a free beer, which I brought home for my hubby.  I munched my overpriced Tuscan Chicken Wrap (next year I will pack my own lunch) and sipped my complimentary bottled water, thankful for the overcast sky.  The cheering from the crowd was deafening as the elite runners entered the stadium, their lithe bodies flying toward the Finish Line.  When the Memorial Day Tribute started, I got goose bumps watching the servicemen parachute their way into the field with their respective military branch flags, followed by Old Glory herself!  What a terrific end to a terrific day!

Afterwards, as I walked back to my car, I was already planning to repeat it all next year.  Hopefully, Lisa will be all healed up by then.  Teresa and her sister Bonnie expressed an interest to participate, and another friend says she wants to do it, too.  So even though I didn't have any buddies with me this year, next year will more than make up for it!  Would you like to join us? 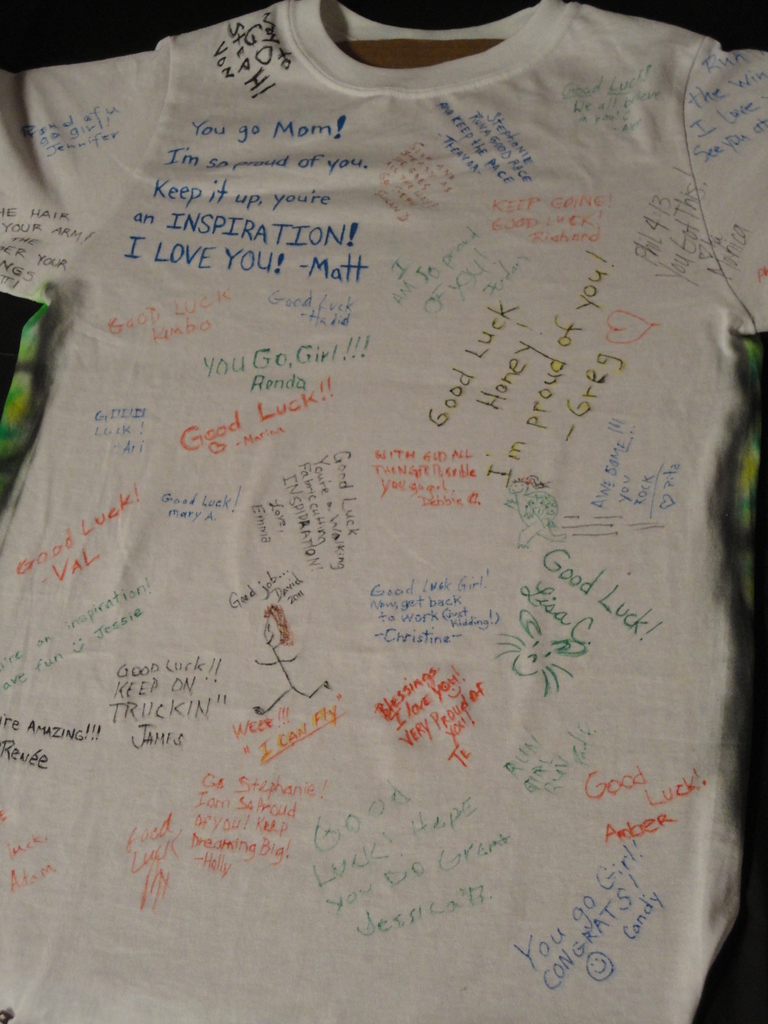