PHOTO: Andrew Catalano approached the finish of the Xterra Marathon of Trail Races on Saturday, Oct. 9., at Cheyenne Mountain State Park. Catalano won the marathon in 3:33:51.

With a couple of rolling miles left in the Xterra Half Marathon Saturday at Cheyenne Mountain State Park, Colorado Springs' Doug Ryden took a quick glance behind him.
Ryden saw his lead evaporating. He saw his chances for winning being consumed by Gerald Romero's long, quick strides.
"I really wanted to hold him off," Ryden said. "I started cramping a little in my calves ... but I really love to run the trails, so I gave it everything I had." 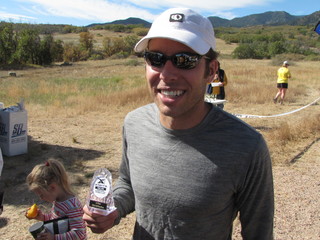 Ryden (left) found another gear on the downhill stretch to the finish, hurdling rocks and powering through the trails tight turns. He and Romero (the 2008 and 2009 Triple Crown of Running Champion) had raced many times. Ryden knew what was coming.
"Once we could see the finish, I really started to kick it in," he said. "I knew he likes to sprint at the finish."
With a noisy crowd cheering the pair home, Romero made his move.
"I kept pushing and pushing," Romeo said. "I think I had an Olympic 200 at the last. I was hammering and everyone was screaming. I came within four seconds of winning, but I didn't know the course, that was my downfall."
Ryden crossed the finish line in a new course record time of 1:27:23. Romero charged in at 1:27:27. Frank Hammer (1:30:52), Kevin Morgan (1:31:48) and Jeffrey Dewitt (1:38:34) rounded out the top five.
A full field of 320 runners entered the Xterra Marathon of Trail Running events. In addition to the half marathon, runners also competed at the 5K and marathon distances. In the women's half marathon, Nicole Mahobian (right) won for the second-consecutive year, breaking her own course record with a time of 1:43:19.
" It meant a lot more this year because my mom beat breast cancer last year and it's October (Breast Cancer Awareness Month)," Mahobian said. "I actually
promised her I'd win this race for her."
In the marathon, Andrew Catalano won with a record  time of 3:33:51. A soldier stationed at Fort Carson, Catalano is an ultra runner at heart and is training for the Cactus Rose 100, Oct. 30 in Bandera, Texas.
"This is really my last big event before the 100," Catalano said. "I'm goiung to shut it down and recover."
Catalano trains on the Cheyenne Mountain State Park singletrack, an easy jog from Fort Carson. He said he pulled away from the pack on the first series of hills.
"If you'd never run this before, you wouldn't know how to handle those hills," Catalano said.
Jason Morgan (3:41:33, Colorado Springs) finished second, followed by Jim Coulson (3:44:42, Canon City), David Wheeler (3:46:29, Boulder) and Mathew Curtis (3:46:54, Castle Rock). Holley Cooper won the women's 5K in 26:47. Shannon Lynch was second in 26:57, followed by Kathryn Moore (26:58), Charlotte Salley (29:19) and Nicole Bluemle (29:43).
About the race: Organized by race director Victoria Seahorn, this was the second year for the Xterra Marathon of Trail Races. Seahorn started the event in memory of her fiend Lindsey Gabe, who died from breast cancer in 2005.
"We ran our first marathon together in 1993," Seahorn said.
The Xterra Marathon of Trail Races will grow to a three-race series in 2011, Seahorn said. Though plans are not solidified, Seahorn is looking at a race in Mueller State Park and at Snow Mountain Ranch near Winter Park.