Now that I'm done with my early season run focus, it's time to spend a lot of quality time on the bike. Ironman Arizona might be 6 months away, but the stronger I am on the bike, the better that race is going to be. Instead of going my my typical solo long ride today, I signed up for the Tour de Cure 50-miler to get a great challenging ride in and support a fabulous cause. (note: Donations will be accepted until June 15th so if you've got $5, why not put it for a great cause? THANKS!!!) Also, as one of my triathlete clients (who will be racing his first tri tomorrow!) has diabetes, so it made signing up even more worthwhile.

I was hoping to be a little more rested going in to the ride and tried, to no avail, to get to bed by 9:30pm. It was closer to 10:30 by the time I got to bed and my alarm was going off at 5am... I was able to get out of bed around 5:15 and get ready. I got my bike packed up and everything I thought I might need, including extra layers. Highs were supposed to be around the mid-50s with clouds coming in and possible storms. Better to have too much than too little! Just before 6:30 I was on the road to Woodland Park. Heading up the pass my stomach started to feel a little weird so I made a pit stop at a gas station just outside of WP. Eventually it settled down so I was glad. Not sure what was going on there.

When I arrived at the ride site, I started prepping my bike and got a text from my mom that she was at the site as well. She found me and once I was ready we headed over to the start area. I found the tent of our team, the SnydeRemarks Ruff Riders and set down my bike and my other stuff. I saw Jennie Kiser from the tri club and let my mom know she could chat with her while she waited for me to finish (although she did head out and run some errands - would have been a long wait!) I then met Charlie, our team captain and a Red Rider (rider with diabetes), who I'd actually never met in person. The sun was out and it was looking like a great morning. Some other team members assembled at the tent as well and we were able to get a group shot:
Shortly thereafter we made our way to the starting line. 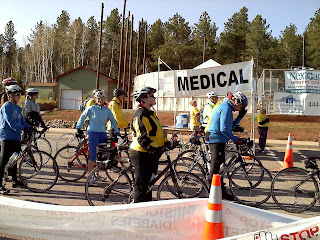 Then we were off! The 50 miler was mostly downhill for the first half, and uphill for the second. It was a tad chilly on the first descents, but gorgeous scenery! I rode with Bill and Madison until about 10 miles outside of Deckers, where I pulled a little ahead. The last few miles before the turn-around, even though downhill, were rough as we were fighting a pretty substantial headwind. I saw Rick K from the tri club heading back up the hill. He started a little earlier to try to avoid the weather - not a bad idea today, although probably a bit chillier at the start. I stopped at a rest stop, made a quick pit stop, ate half a peanut butter and jelly sandwich (stomach seemed just fine), refilled my bottle (of which I wasn't drinking enough due to the chill), and made my way the last couple miles to the turn-around. After the turn-around a couple guys caught me and asked if they could join me. Sure! Even though we had a tailwind to climb back up, working with others will make it a much nicer ride.

So up we went, climbing back out of Deckers. Great scenery and a fun climb. About 7 miles out of Deckers it gets steep and I lead the group of three to the top. The "tough" part was over but there would still be plenty of climbing left to get back to 8500ft. Up we went, happy when we got some relief from climbing, and working together. On the way back another guy joined us all the way to the finish. The more the merrier to share the load! The wind was picking up even more, clouds were rolling in, and the hills just kept on coming, but we all made it to the finish line smiling that we made it through a tough ride!

Brian from PikesPeakSports.us was out taking some pictures.
Here's the GPS data from my ride.
Mom was there at the finish line and we waited a few minutes for the food tent to open, had a bit of lunch and then headed to a coffee shop to warm up!
Then I headed back down the hill for a much needed nap!