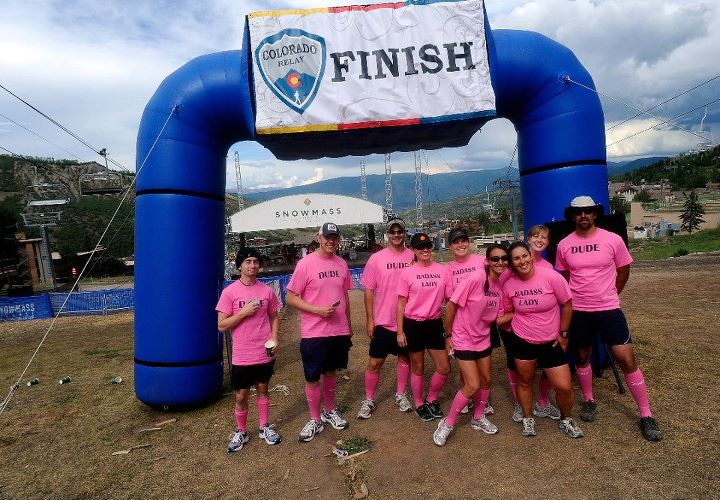 Team photo by Christian Murdock. Other photos by Katie Schwing.

This adventure started with a conversation with a coworker. She had found this event, the Colorado Relay, and was putting a team together. I volunteered, mostly because I wanted to skip a year of the Pikes Peak Ascent but still spend my summer working and training toward a big goal. 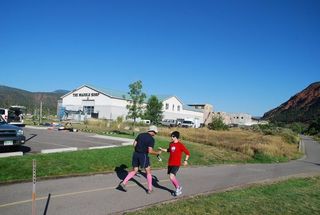 One by one, people started dropping out. Ascent registration was right around the corner, and our team was falling to pieces. When the coworker threw in the towel, I started organizing my own team.

Gathering and keeping members is probably the hardest thing about doing an event like this. It's one thing to get yourself there on time, registered, with the right gear, etc., but to make sure eight other adults are doing the right things at the right time ... yeah. We were originally an all-female ultra team, but we added some men down the road, ending up with the team name "Badass Ladies and Some Dudes." We started August with one nine-person team and ran the race with six of the original nine.

On top of that, the Relay directors kept changing it up, including on race morning when we were greeted by an email full of last-minute changes and new directions. Last year's race was 174 miles; this year's race was just shy of 200 miles. The organizational effort here was like a part-time job at times. 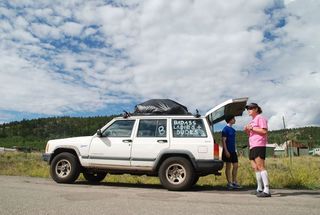 But we all made it to Breckenridge in one piece ready to run. A full team is 10 runners, so we worked it out so three of ours ran an extra leg. One girl got pretty sick, so another ended up running five legs, or 35 miles total. Other than that, no one got injured and everybody felt pretty strong (except for some brief stomach issues, which everyone dealt with). We had four runners and one driver/photographer in one car and five runners in the second car. It was really only too crowded when the cars were "off" and all five had to squeeze in together, especially at night when it was raining and we were all trying to get some sleep but not get soaked.

The route ran from Breckenridge over Boreas Pass, then looped back around to Frisco, mirrored I-70 and US 6 for awhile, then followed a bike path east on CO 82 toward Snowmass Village, finishing on something called the Rim Trail. It made for a pretty dramatic finish as you could see runners popping out on top of a hill, switchbacking down the hillside, then running up the road to join their teams and make it across the finish line all together. 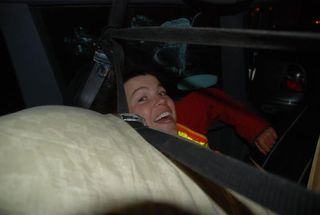 Right before we sent our runner over the Georgia Pass leg (1600 feet of elevation gain up to 12,000+ feet), thunderclouds rolled in and it began to rain. Kelly, the runner, said the first couple of miles were like running up a river, but she didn't get struck by lightning, so we were happy about that. After that it rained off and on until about 11 p.m. when it cleared up. The following day was hot and sunny -- too hot at times.

My legs were 7 miles, 10 miles, and 7 miles, or 24 miles and change for the weekend. One of those happened about 4 p.m., the second one was 9 p.m. (in the rain), and the third was at 6:30 a.m. (my preferred time to run). I took the team back to downtown Frisco, from West Vail to Avon, and from Glenwood Springs south almost to Basalt. 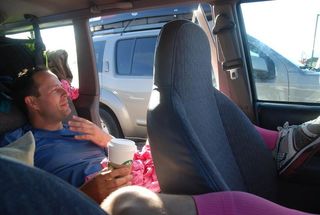 Overall it was a good experience, and I would participate in an event like this again. We had a few qualms: no aid stations at all (we were told there would be 4); poor course markings, especially at dusk; not enough shirt sizes; last-minute changes. Also they gave us our commemorative pint glasses at the beginning instead of at the end, so we ended up breaking two on our journey across the state.

The team socks were bought on a whim the week before the race, but everyone ended up running at least one leg in them. The dudes especially seemed to enjoy them, and they made nice compression socks for in between legs.