Slightly belated race report here! Excuse my tardiness: As if my summer wasn't crazy enough trying to train for a mountain marathon while caring for an infant, I decided to switch jobs a week after the race. It certainly hasn't been boring!

I did a couple of easy runs in the week leading up to the marathon -- a jog through Palmer Park with the Attack Pack on Tuesday and a Monument Valley shuffle on Thursday, then took it easy on Friday and Saturday. As I wrote before, my nerves kicked in around Friday night and it was hard not to get scared.

A funny thing happened, though -- once I laid out all my clothes and gear Saturday evening, the nerves melted away. 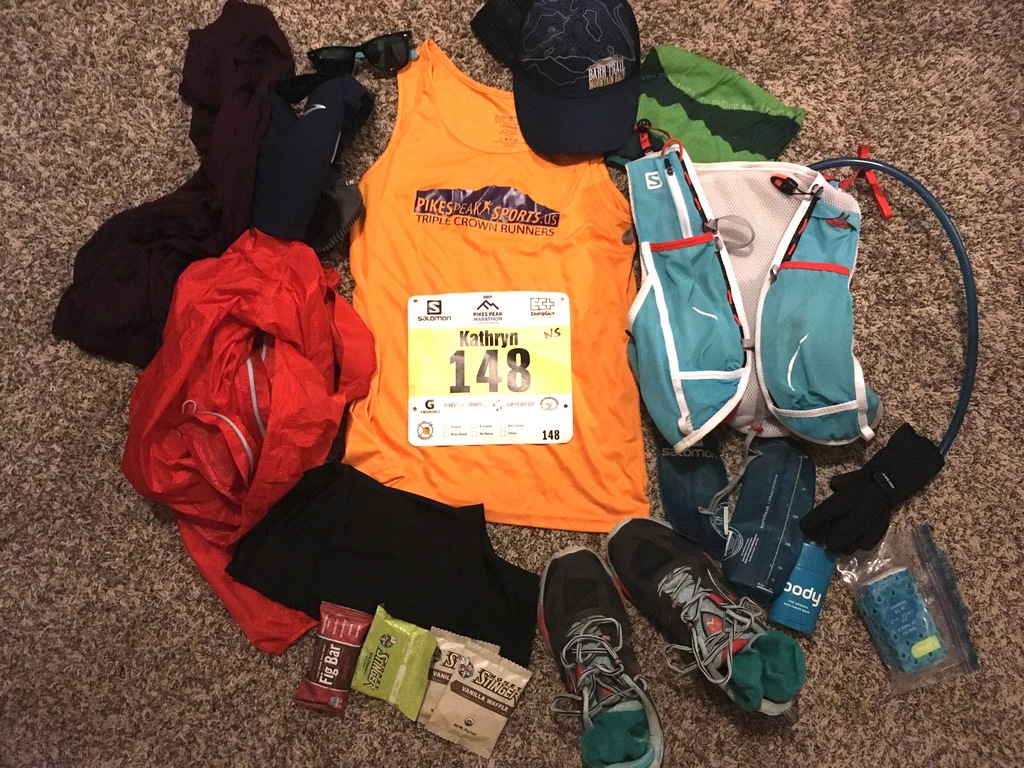 On a gear note, after a final look at the weather on race morning I actually ended up leaving all my extra clothes except my windbreaker and gloves (Buff, long-sleeve shirt, arm warmers) out of my pack, and that turned out to be a really good decision. I did bring along way too many snacks, but that's a lot lighter than extra clothing :)

Anyway, race morning arrived, and I caught a ride with a few Attack Pack members and positioned myself with the other wave 1 marathoners. (Why I was put in wave 1, I'll never know.)

These people belong in wave 1:

Anyway! After many hugs and high-fives, fellow Attack Packer Molly and I set out on our great adventure, purposefully positioning ourselves toward the back of the first wave. 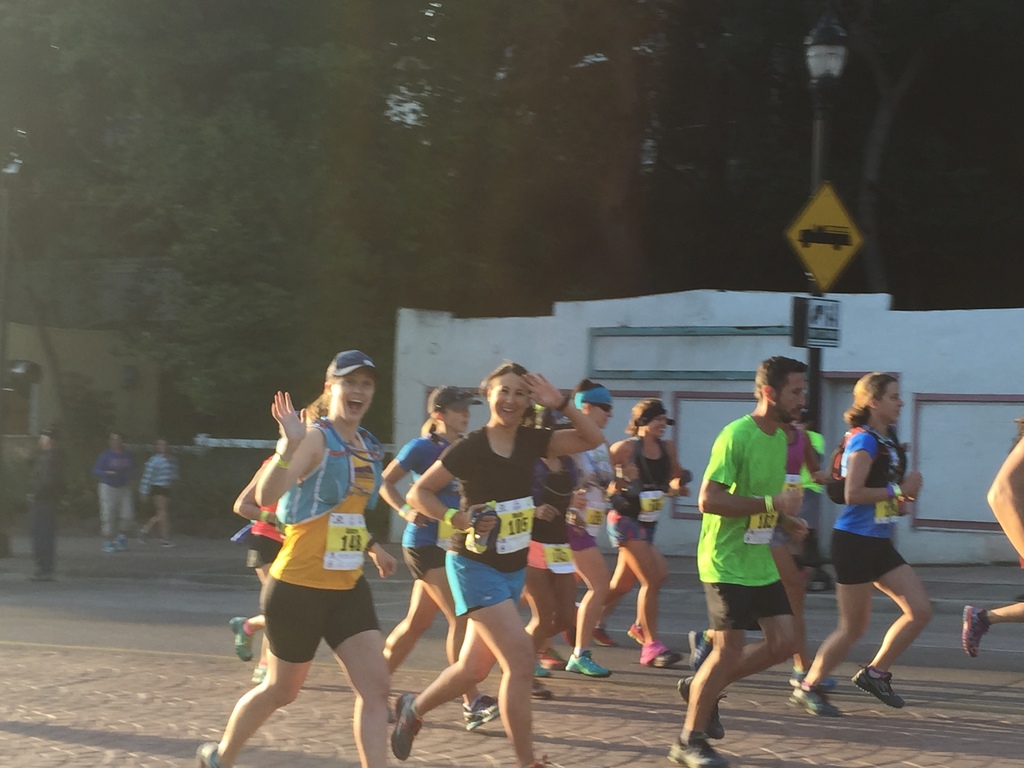 When I started out on this journey, I thought it would be awesome to beat my time from 2012 (for the record, that was 7:12). With the mountain in front of me and 13 miles to climb, I decided that finishing, ideally rubber-side down, would be my only real goal for the day. I started taking in calories early in the form of Skratch and the huge pile of snacks I brought along.

I'm not sure if it was excitement, adrenaline, nerves, or what, but I struggled to get my breathing under control in the first mile. Then my fingers swelled up by mile 2. These things seemed worrisome, but there really wasn't much to do but keep going. Miles later, they both resolved. Molly slowly sped away from me as we approached the top of the Ws.

It was great to see familiar faces at Barr Camp and sample from the smorgasbord of snacks available there. I had brought my own pickles, but I was happy to see them available. I think I took a handful of grapes each time they were offered -- it's like nature's Gu.

Above Barr Camp was the first time I started to struggle. Usually this is a strong point of the race for me -- I can usually start powering past some flatlanders as my altitude training kicks in. However, having been put in the first wave may have messed with me here. There were still plenty of people moving better than I was coming up from behind, which affected my mental game. I eventually shut it out and just kept pressing for A-Frame. I felt weak and slightly queasy.

That's where my fortunes turned around. After forcing myself to take in more solid food (maybe grapes aren't nature's Gu after all), I started feeling better. I finally began to pick off some racers ahead of me beginning to struggle. I even managed to jog some of the flatter sections above treeline. It was fun and inspiring to see my faster friends start flying downhill toward the finish. Uphill runners have to yield to the downhill during the marathon, so I had to stop quite a few times in narrower sections.

I finally popped out on top at 4:45, my slowest Ascent by a good 14 minutes, but I didn't even care. I was on top of the world. I hugged Fossil teammate Michael Everson, grabbed even more grapes, and prepared for the downward spiral.

Let me say this up front: I am not the most graceful downhill runner. I had met up with fellow Marmot Christina at this point in the race, and we were able to run some of the portions down together. She was nursing a sore ankle and even fell a couple times during the descent and hurt the other one, but even still, on the nontechnical sections she would start to pull away.

On the section above Barr Camp, I had fallen into a good rhythm with Christina and Alan Flolo, who was also nursing an injury. We were chatting about this and that when I took my eyes off the prize for a second too long and my face rapidly made contact with the trail. It must have been a pretty epic crash, because everyone around me stopped to make sure I was OK. As soon as I made sure all my teeth were firmly in place behind my now-bloody upper lip (phew!) and all my limbs were functioning despite some scrapes and bruises (double phew!) we set off on the last half-mile to Barr Camp, where I knew help was waiting.

I'm not quite sure what I looked like when I got there, but I made quite an impression. Theresa Taylor checked out my face and said nothing seemed to be seriously wrong. I grabbed some more pickle juice, even more grapes, and stood for a second in the hose spray to cool off. The Barr Camp volunteers erupted in cheers when I said, "I guess I had better just keep going." This was the home stretch, and my husband and baby were waiting at the bottom for me. Time to stop wasting time!

I made it down the rest of the trail without further incident, thankfully. I started getting really excited when my feet touched pavement at the top of Ruxton. Despite my aching body and the fatigue of everything I'd accomplished so far that day, I felt my steps quicken.

I can't really describe the feeling of returning to Manitou Springs after completing such a thing as the Pikes Peak Marathon. Triumph, elation, pain, exhaustion ... and on and on. As I got closer to the turn to the finish, I started recognizing faces and voices. Someone offered small cups of beer, and I grabbed one, saying "I've been waiting for someone to say that for 13 miles!" 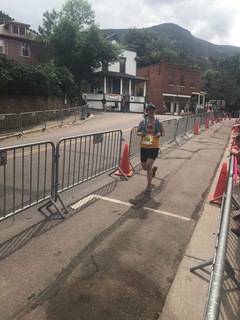 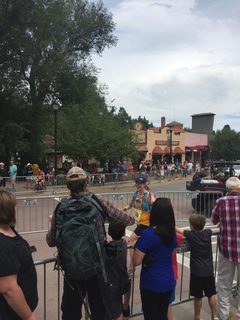 Seeing Lance and Johan right before the end was powerful. I have the best support crew in the business! As I stepped across the timing mat and stopped my watch, tears welled up. I crossed the finish line in 7 hours and 36 minutes. 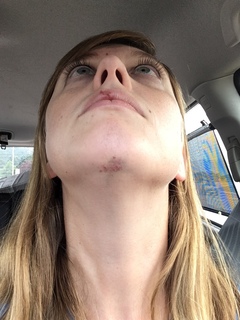 The aftermath wasn't as dire as I was expecting. After about a week, my face looked normal again. Two weeks later, running starts to feel better. I have a lot more free time on the weekends now that driving up the Pikes Peak Highway isn't always on the agenda.

I'm not 100% sure what my next goal will be, but completing this marathon has given me so much confidence. Bring it on! 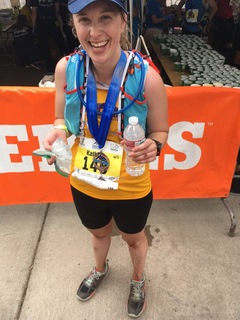