It's 2011 and that means Relay #4 with the "not professional" relay team Girls Heart Rockets. This year I joined the rocket loving girls for the Red Rock Relay in Utah and as usual had a blast! Here's a recap (as best I can remember with the lack of sleep) of my adventure.
The Red Rock Team
Van 1 (Discovery): Jordan Wirfs-Brock, Stephanie Wuerth, Serena Eley, Henrietta Aiken, Jenn Burke, Stephanie Law
Van 2 (Columbia): Nicole Drummer, Clara Eng, Kelley Hess, Vicky Petryshyn, Kate Kostal, Laura Jakosky

Jordan, Stephanie W, and I road-tripped it out to Utah. We met at the Wooly Mammoth Lot Park-n-Ride near Morrison a bit after 7:00am and got rolling to southwest Utah. About 9 hours later we got to Cedar City, where packet pick-up was getting set up. A little weary from the long drive, but we met up with most of the rest of the team, got our race stuff, and enjoyed the pasta dinner put on for us by the local boy scout troop. Once satisfied, we made our way down I-15 to Hurricane and to our hotel. (note: Hurricane gets very, very windy in the evening.)

I knew some of the GHR-RRR team, others were new. We got everything around as best we could for the morning and went to bed. The alarms went off at 5:45am and it was time to load up the vans, decorate the vans, and partake in the complimentary continental breakfast before making our way to the start at Brian Head Resort (yes, it's both strange to say and type.)

The start line was a party, with good music, a fun race announcer, and many excited teams. Costumes were everywhere. We had Wonder Women, many gals in tutus, and an exposed (fake) rear on team Better than a Colonoscopy. (??!?!?!) We had just enough time for a group photo before Jordan began the relay for us. She hopped on the ski lift and went up to the top to then have to run down back to the resort to then handed off to Stephanie W.

Van 1 left to get their runners on the course, and we, van 2, slowly made our way up to the first major exchange. It was there when the lightening, rain, and hail came. And I got to meet the Banana!

Around 2:00 we figured Stephanie L would be arriving any minute, so Kelley was my umbrellina and Kate and Laura kept me warm while I waited. (thank you Laura for letting me share your poncho!) We're at about 8500 feet so pretty chilly. Once Van 1 arrived, we knew Stephanie was nearby and a few minutes later she was running up the hill to the exchange. I grabbed the baton (slap bracelet) secured it to my wrist and headed off.
Leg #7: Navajo Ninja, 5.8 miles of VERY HARD. The rain and wind had subsided slightly and it was actually a comfortable temperature for running uphill. I started off a little too fast, backed off a tad and then pushed myself up the hill. There was one guy ahead of me that I just couldn't quite catch, but I'm sure having him as a target allowed me to push a little harder up that hill. My first leg done and I changed into some dry clothes and hopped back in the van. 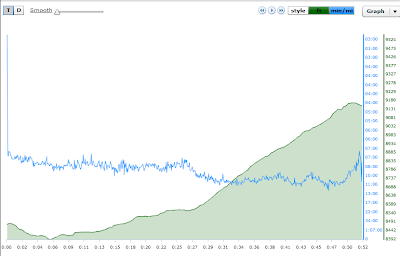 Back in the van, we went from exchange to exchange, enjoying the views and really glad we had Victoria the Geologist on board!

Once our van was done, we handed off to Van 1 back in Cedar City, posed for a group shot and went to find our resting place for a few hours until the next major exchange. I pulled a blanket into the grass (I think it was a church in New Castle.) We altered the rotation here a bit and Kelley took Leg #19 (8.5 miles) and I took #20 (Cap'n Kirk) - a 2.8 mile EASY flat, run as fast as you can at 11pm. So I did: 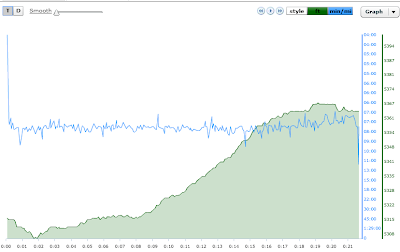 The profile here is deceiving. If you look at the scale it's only about 50 feet of gain. PANCAKE FLAT! I passed a few folks and really tried to catch one guy, but he heard me coming so he picked up his pace. He thanked me afterwards for the little push. I hand off to Clara and we do our leap to exchanges thing. The next major exchange is at a church and here our driver, Eric, had to leave us after we handed off to Van 1.

So we were on our own to find our resting stop/major exchange. He also took the GPS so we relied on poor cell phone navigation, went the wrong way for a bit, then finally found our stopping point at the Washington City Rec Center. A little bit of heaven! Showers for those who wanted, real bathrooms and places to snooze. It's 3:45am and we're anticipating the runners to arrive around 5:15. The pool deck was open for lounging and snoozing so I got a few minutes of sleep, but as I was once again the first runner for the van, I wanted to make sure I was ready. I'm usually up at 5am, but the sun wasn't. I made sure I was in order, had one more Cran-Razz UCAN (at this point I was pretty hungry but not ready for solid food).

Sure enough just before 5:15 Stephanie came blazing in and I headed out.

Leg #31: 5 miles of HARD. I took the downhill a bit conservatively and then gave what I had left for the rest of the 5 mile leg. I had a rabbit with a red-blinky light that I didn't want to let out of my sight. My quads were burning on the downhill section and a bit heavy on the uphill, but I made it to the gas station exchange and let Clara go on her way! 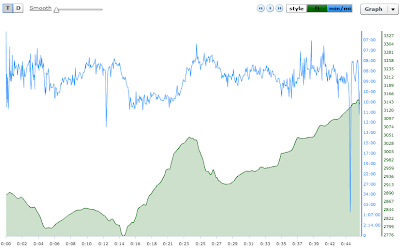 The sun was now rising, I started to eat some more solid food and was feeling pretty good. A bit tired, but good. Our last set of legs totaled about 35 miles so we had a good stretch of time before reaching the finish. We began to get more rural on the highway and had to climb up to Zion National Park. The views were phenomenal, and the gals still had some speed in their legs. They all hammered their way to the finish. We met the rest of the team at the finish line and when Laura was in sight, we all crossed together. It was 10:50am, just under 25 hours after we started. We were actually the 5th team to cross the line and came in 13th overall (teams started at different times between 6am-noon on Friday.) We indulged in the free snow cones, enjoyed the amazing views, got lunch at a mexican restaurant in Zion and then split up. Some explored the park and others who were too tired (like me) went back to the hotel. But, the group out and about did stop by In-N-Out Burger in St. George and brought back dinner for us all. Yeah I put down the double double animal style and a chocolate milkshake pretty quickly. Great way to wrap up an amazing weekend with amazing people and amazing views. 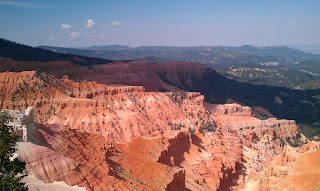 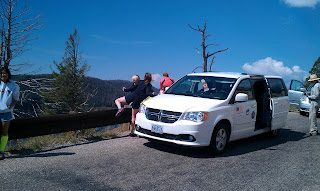 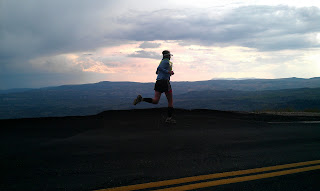 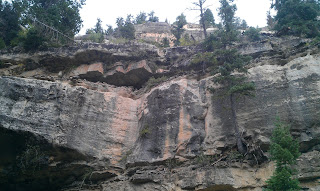 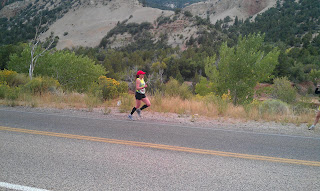 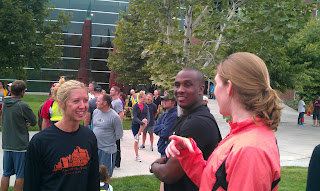 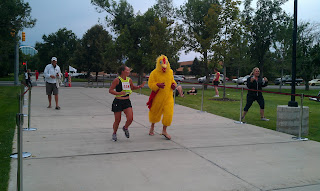 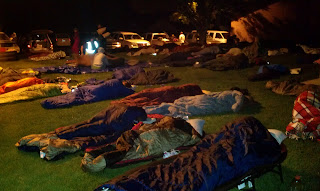 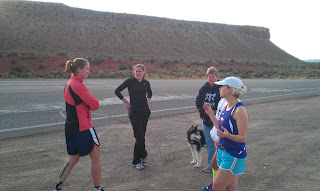 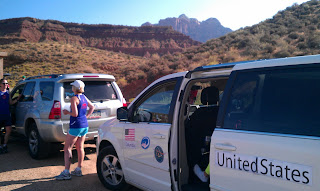 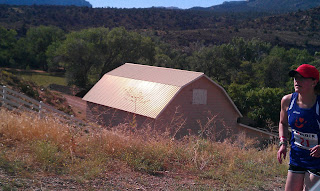 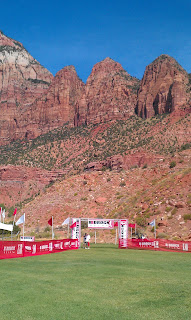 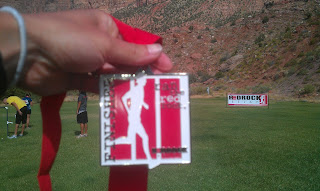 After a SOLID night's sleep Jordan and I headed back to Colorado and had to join the real world again.

Here's a link to more pictures.

Note on my fueling plan:  I was to have a Cran-Razz Generation UCAN 30-60 minutes prior to each leg and a chocolate afterwards. Relays are tough on your system due to the lack of sleep, running, and deviation from normal eating patterns. My plan was for the UCAN to give me the energy so I could rely less on solid food. I did the UCAN before each leg and a chocolate after the first. I did eat a couple small turkey sandwiches, bananas and Justin's Nut Butters, hard boiled egg, and a few snack foods (brownies) throughout the relay. I ended up only having one chocolate after the first leg. In retrospect I should have stuck to my plan with having one after every leg, but this was by far the best relay I've had in terms of keeping everything in check!