“Izquierda o derecha?” I shrieked, pointing to my color-coded bib. Right or left? 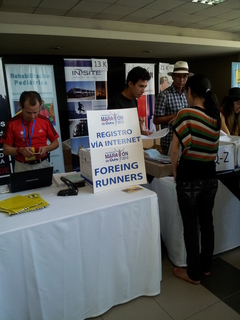 I was at a critical point in my race in Quito, and there were three courses: marathon, half-marathon, and 8-miler – I needed to know which way to turn to complete my chosen half-marathon course.

So I did. I turned left, ran through the gigantic air-filled arc, and looked for a way to keep going.

There was none. The race was over.

I had clocked 8:08 miles for 8 miles, a pretty stunning accomplishment at the tail end of bronchitis and at an elevation of 9,300 feet. But let me be clear: I had only gone 8 and I intended to go 13.1.

This was not my only moment of complete consternation that day resulting from a language barrier. At more than one point during the race, volunteers were hurling slinky plastic bags of water at runners passing by.  At first I thought I’d just avoid them. After all, who knew whether the water was safe to drink? Ecuadorians have much heartier digestive and immune systems when it comes to water-borne parasites. And then, the inevitable happened: I got thirsty. Really, really thirsty.

I caught a bag and, while running, examined it.  It seemed well-sealed, and turning it over in my hands, I saw the magic words: agua purificada. I’ve never drank anything so quickly. But here I was at the end of the race – a point-to-point through the city – and I had only run 3/5 of the mileage I intended. And so, I did what any good runner would do – I marched over to the bus stop (there was a somewhat straight line back to my hotel, one that I surmised was a bit shorter than the course), and started running.

It was a quiet 7 miles back to my hotel, and I stopped to linger and refresh at many parks I wouldn’t have seen otherwise. It was on a busy thoroughfare, but many residents were sleeping in, or at church, so traffic – even foot traffic – wasn’t terrible.

*As an aside, I emailed the race director after the race to let him know of my mistake. He told me that many Spanish-speaking participants had made the same erroneous turn, a fact that brought me an incredible sense of relief.

Way to go Kristy!  8 mi is still a decent race and run back to the hotel was bonus!