December through May really weren't anything to write home - or a blog- about; mostly just a lot of low mileage weeks and cross training and crossing my finger that I'd still be healthy once the weather warmed up. With some help from the great-mountain-running-guru/PT, Simon, I made it to the Mt. Evans Ascent on Saturday in one piece and ready to run.

I had some loose ideas of goal times and what pace I'd need to maintain to finish in 2:45, 3:00, etc and I stood at the starting line, at 10,600', with only a few butterflies in my stomach and a decent night's sleep behind me.  Being super-anxiety-runner-girl, this is unusual for me.  So, off I went, a little off put by my lack of over-the-top-jitters.

The miles started to tick by and I managed to choke down a Skratch fruit drop every mile, knowing that if I don't start taking in calories early I won't bother at all and things will go south really fast.  I passed three aid stations and took whatever they handed me - Gatorade - and kept moving because I was on a roll. I checked my watch occasionally, not obsessively, and at mile 9 was still on pace for just under 2:45, which was pretty much beyond my wildest dreams.

I tried not to get distracted by the fact that things were going well, that I was passing dudes, that runners commented on the fact that I was smiling well above timber line, I tried to stop thinking and just run, because there wasn't enough oxygen to do both. I just ran Mile 10 and it was amazing! Like, 9:38-pace-for-a-girl-who-has-only-run-above-treeline-twice-before-amazing!

It felt like flying until I turned the corner one switchback below the final aid station and was caught by surprise as the Gatorade that I had mindlessly grabbed at that each aid station made a rather surprising reappearance. Not once, not twice, but three times. That's right, I barfed bright green, Gatorade (along with those precious Skratch drops) off the side of Mt. Evans with 3 miles to go. That glorious 9:38, turned into a suddenly cold, shaky, and dizzy 14:50, followed by a mid-17 and a 16-something. Abysmal by comparison, but I'm proud of, and rather amused, by it all.  I crossed the finish line in 3:05:42, good enough for 2nd place in my age group, 32nd woman (I was somewhere between 15 and 20 prior to blowing chunks/Gatorade off the side of a 14er) and a pretty good story about high-altitude-upchucking to boot. 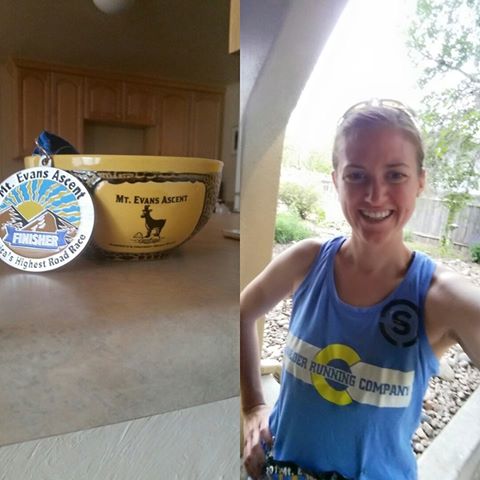 Had a great weekend with friends at Mt. Evans. It was super to run healthy and #runhappy for Boulder Running Company an Skratch Labs.