I’ve watched them run down the last stretch of Ruxton Avenue for years, bloodied, battered, and sometimes limping but almost always with a big smile. Having run a few marathons myself, I usually recognize a runner’s smile once the finish line is in sight, but for these individuals, everything seems to slow down and magnify in that home stretch like none other. Their strides seem longer, the cheering louder, the colors brighter and even the thin mountain air seems denser with excitement and filled with more admiration than anywhere else I’ve experienced. That familiar Ruxton stretch of road is for that particular day crammed with a virtual Who’s Who of not only the trail running community, but in my life as a whole since moving back to Colorado over ten years ago.  That road is at once filled with all of the faces who have lifted me up when I doubted myself, pulled me through those difficult years at home, kept my ego in check and continue to amaze me with their compassion and camaraderie. All of these important people at once line the streets and cheer and some years, even amaze us with strong finishes of their own. The Pikes Peak Marathon is a very special day of indescribable celebration and achievement that I’ve never fully embraced as my own possibility – until now. The Pikes Peak Marathon is a unique event in that it climbs over 7,815 feet to the top of a 14,115 foot peak known as “America’s Mountain.” It is the third oldest marathon in America and started in 1956 as a challenge between smokers and nonsmokers in conjunction with the 150th anniversary of the discovery of the mountain itself by Zebulon Pike. At the time, a former marathon champion and outspoken critic of tobacco wanted to prove that smoking inhibits one’s physical endurance. The race began with ten tobacco free runners and three other smokers, one with a two-pack-a-day habit. In the end, none of the smokers completed the round trip, so the hypothesis was seemingly proved.

Another interesting fact about the Pikes Peak marathon is that it was the first American marathon to allow women to compete from the inception of the race in 1956. However, it did not lure any females to the starting line until 1959 when Arlene Pieper became the first woman to officially complete a marathon in the United States.

I should also note that I’ve met Arlene on numerous occasions as she remains in the local area and is frequently visible on race weekends each year. I look forward to seeing her as much as I've enjoyed usually sipping the margaritas at The Loop, a great Mexican restaurant that has a perfect window view of the marathon finishing chute. Arlene remains vibrant, inspirational and steadfast in her enthusiasm and support of our local running community.

For many of those reasons, the Pikes Peak Marathon has always been a goal in the back of my mind but one I've seemed to put off each year. It is an incredible race that lures the most talented runners, but I’ve always been waiting for a “good” year to dive in and accept the challenge. I’ve never considered myself “talented” when it comes to running and instead am haunted by the many physical and mental struggles I’ve suffered with my fitness over the years. The task of completing the Pikes Peak Marathon equally excites and scares me but since it is a hometown race, I know I have many friends with which I can train and I know that on marathon day, there will be more than just my husband at the finish line to celebrate my dream. It will be a day of pain, hard work, and devotion but ultimately, it will be a celebration of everything Colorado has brought to my life and a shared experience with the people who will also suffer and rejoice alongside me. It is friendship, it is determination and though I too may be broken, bleeding and limping down Ruxton Avenue this fall – it will also be a day of long anticipated SUCCESS. Who's with me? 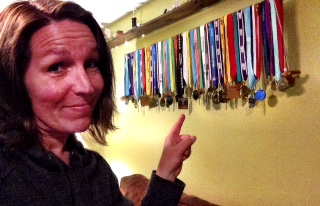 I will be there to cheer you on!!