My musings throughout my Mighty Marmot matriculation have been a lot about me and my training. And 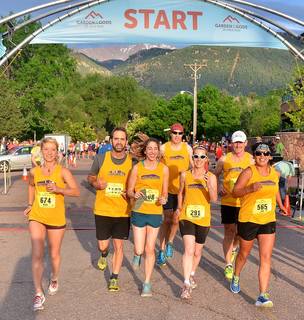 commencement day was the Ascent.  I guess the rest of my blogs will be post graduate work. Today I will focus on what I got to see over the weekend.

I'll start with the teams I ran with.

The Marmots were a blast to run with.  Seeing them at every race along the Triple Crown and encouraging them (and being encouraged by them) was special.  --Photo by Tim Bergsten

Thanks for selecting me to the team Tim Bergsten, and special thanks to my teammates: Jen, Mike, Lindsey, Anna, Daneille, and David.  Inspiring runners in so many ways. 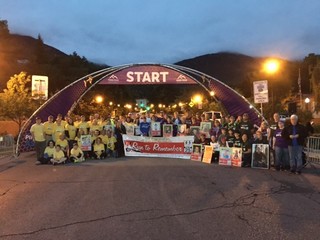 The next team I ran with is for Keep Kids Alive Drive 25.  There were lots of team members in this crew and I don't have all the names.  I wrote a little blog on this a few weeks ago, My brother, Tom, is the director of the organization and he had 20ish runners doing the Peak over the weekend along with dozens of spectators who met us at the finish line. It was great to have all these people cheering us on.

There was some remarkable stuff going on the mountain this weekend.  I'm not going to mention all of them because this is a blog.  But here are a few that might have been missed: 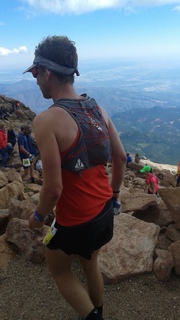 Brandon Stapanowich decided to run up and down Pikes 4 times.  He covered 100+ miles in just over 30 hours.  Those of us who know Brandon know that he is no slouch.  He makes up races that no one in his/her right mind would think of, and then he runs them.  This "race" is formally known as the Stank and Brandon has the course record.  He got 3 round trips done from the start of the Ascent to the start of the Marathon.  Then toed the line for the Marathon for his "Double."
The photo is Brandon at the top for the 4th time at about 28 hours. 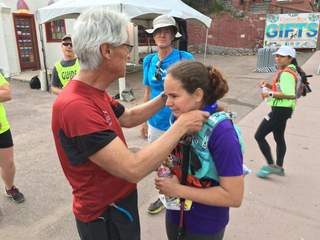 Jessica Beecham attempted to run the Pikes Peak Marathon.  I got the pleasure of meeting and guiding Jessica on a few runs over the summer and she is just pure joy.  Why, you might ask, is Jessica so fantastic??  Well, she is legally blind and can barely see 10 feet.  And that vision is a blur. So Jessica and her guides ran up Pikes Peak and back down. Now she didn't make the finish line cut-off, but she did make it to the top in time and  still managed to get done in 11:30 ish. I can't imagine running this race blind.  She was fantastic.
--Photo by Anne Fleming 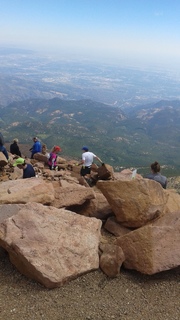 I'll brag a little on my brother, Shawn Everson, who has never run the PPM. In his first attempt last year, he dropped at the summit from exhaustion.   He came back this year to redeem himself.

But just 8 weeks from race day he tore the hell out of his quad on a training run and it was debatable if he would be able to toe the line.  Not only did he toe the line, he got up 20:00 faster than last year and he looked great.

He finished a little over 4 hours later.  He wasn't fast, but the goal was to finish, and that's what he did.  Now he has a jacket to prove it.

As many of us are impressed by Joe Gray, Kim Dobson, and Alex Nichols for their spectacular performances on the mountain, for most of us, this is a personal challenge.  We know we won't likely win anything.  But, as Mr. North stated on a little run he did in the Spring, "GET OUT AND GET DOIN'...THAT'S ALL I GOTTA SAY!"

Thanks Mike. Our Live Forward! team will be back for the 11th year running in 2017. If any of you out there are interested in joining us, check out http://www.keepkidsalivedrive25.org/runtoremember