There's a popular saying offered among athletes in the period immediately preceding a race: "They hay is in the barn." In essence, take confidence in your training because panic or last minute heroics will not help and can often hinder performance.

Well last week was I was a hay-loading machine (perhaps not as good as these guys though). 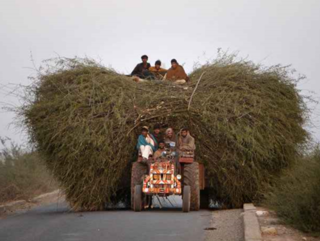 It week was my peak training week in preparation for the GARDEN OF THE GODS 10 MILER on June 12th followed by the San Juan Solstice 50 miler, a mere 6 days later. I ran 6 consecutive days with bouts ranging from 75 to 365 minutes(pics of my run to Baldy/Almagre) and a weekly total approaching 14 hours. Needless to say, it was a "three jars of peanut butter" week instead of the usual two. Though not extreme by many ultramarathon standards, this was by far my heaviest running workload in over 5 years.  What's more, all the runs were of pretty good quality (not necessarily fast although speedwork/tempo runs were included), I found myself extremely well recovered each day, and I felt...dare I say it...that I could RUN FOREVER!

While that Forrest Gumpesque feeling was incredibly euphoric, a part of me realized I was now entering... the "Danger Zone" -that dimension where illusions of invincibility coupled with poor training decisions and lack of restraint lead to overuse tendonitis, annoying stress fractures, or something worse. You see, the struggle I typically face while running usually goes something like this:

Quads gassed, hamstrings cramping, and mouth like a Colorado Springs summer (dry) -pitted against a mind that cajoles body to push through and maximize the training session, or finish the race strong.

Legs questioning how they could feel so fresh after 6 hours of perpetual movement, curious as to what's over that mountain-with mind imploring body to stop, obey, and live to run another day. Thankfully, brains prevailed over brawn and I'm feeling well prepared for the upcoming races.

Several weeks ago, I received an email from a running colleague foretelling the perils of the "Danger Zone." He had strained his Achilles tendon (ironic right?) and was now facing the very real possibility of dropping out of some big races. His closing words: "enjoy the trails and remember our bodies are fragile so listen and take care of them." These words of warning echoed in my head and were likely my saving grace from potential disaster. You've worked too hard to throw it all away now. Be safe out there!

Thanks Alexis and Amy- with the schedule of races, the Garden is a "B" race as a tune up for San Juan. I'm telling myself to push on the uphills and cruise on the downs but we'll see how that goes. I fear I may get caught up in the atmosphere!

Nicely put, and love the picture.

Comment by Amy (Arcuri) Perez on June 6, 2011 at 9:12am
Brandon, this is a great blog and something we all struggle with for sure.  Is the Garden a warmup for your day's adventure?