Counting down to the Ascent Cycling Series 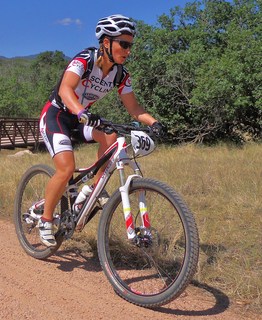 Less then two weeks until the start of mountain bike racing in Colorado Springs - the Ascent Cycling Series organized by Sand Creek Sports. Race season always seems to come so quickly - from plotting schedules in January while training in the snow to toeing the line in sunshine in June - and this year has been no different. Feels like it was just February and Tim and Andy were starting to plan the Sand Creek Riders and picking the team. Now it's only 12 days until the first Wednesday evening race under the setting sun.

It's also hard to believe that four years ago, when Sand Creek Sports brought back the evening races, I was doing my first mountain bike race, on the then brand new single track trails at Bear Creek Terrace. How things have changed since then! In 2008, there were only enough riders for two start times. The fields were much smaller and we stayed at Bear Creek for all three races. I was a Cat 2 racer and was a nervous Nellie about racing on the challenging trail. And I was racing against the Cat 1 and Pro women! Now, in 2012, there are five evening races at two venues. There are three seperate start times with racer caps to ensure a fun event for everyone. And the racing is fast in all categories. I'm looking forward to writing about the races and throwing down some hot laps at both Bear Creek and Palmer Park this year!