Since my good friend Tom had expressed an interest in getting some elevation at least one more time before he did the Ascent, I shot him an e-mail asking if he wanted to go to the summit and do an A Frame and back. He responded with a phone call. “Better idea,” sez he. “Let’s go do the Democrat group and we can spend more time above 13,800." Splendid. Capital idea. As Bill Murray said in Ghostbusters, “I’m excited about this plan, I’m glad to be a part of it.” For the uninitiated, this group of 14ers includes  Democrat, Lincoln, Bross (“closed” because it’s on private property) and Cameron (not officially recognized, kind of like the former planet Pluto). The weather forecast is a bit iffy and nothing but a bit ambiguous. “Little or no snow accumulation,” it reads. Good because I’m not taking spikes. The sky is less than promising as we start out but the temperature is cool enough that I’m not too worried about lightning since it’s the real hot mornings that spawn volatile weather. Besides the forecast had read “some thunder,” with no mention of lightning. We begin at a brisk walk but I am soon left in Tom’s vapor trail as he jets to the top of Democrat in just 58 minutes (you start around 12,000 so it’s like climbing the Incline). Long story short, he hit all four peaks and caught me just before I finished my two-fer and was on the way back to the car. Coming off Democrat I hustled up to Cameron’s nondescript (there isn’t even a sign atop) summit. The wind was picking up, the temperature was dropping and clouds were rushing up from BELOW (a very cool effect indeed). Got the hood up on the rain jacket and was started down as it started to rain. The precipitation quickly turned to grapple or sneet or snow or sleet, whatever you’d care to call it, pelting at a 45 degree angle. I encountered a half dozen people just standing on the ridge and was obviously mistaken for someone else. “You’re an experienced guy,” says one of the older members of the party, “what would you do?”

“I’m going down,” I said emphatically just as the first thunder rolled behind us. Thankfully there was no lightning, just some rumbling. Of course in typical Colorado fashion it was blue sky and sunshine about 15 minutes later. Still, a good workout and for those training for future Ascents (I would hope you’re tapering by now) the Democrat group (often referred to as Decalibron) IS a great place to train. Once you get up on Cameron there is plenty of reasonably flat terrain to jog on heading over to Lincoln and then on to Bross. Tom did not descend Bross but returned to Cameron and down. This group also frames one of the prettiest basins you’ll ever see, home to Kite Lake and on the way up to Cameron and above you get a great view of the kite shape. The whole trip around the peaks had taken Tom less than four hours and probably covered about 7 miles. Photo is from the summit of Democrat looking north. 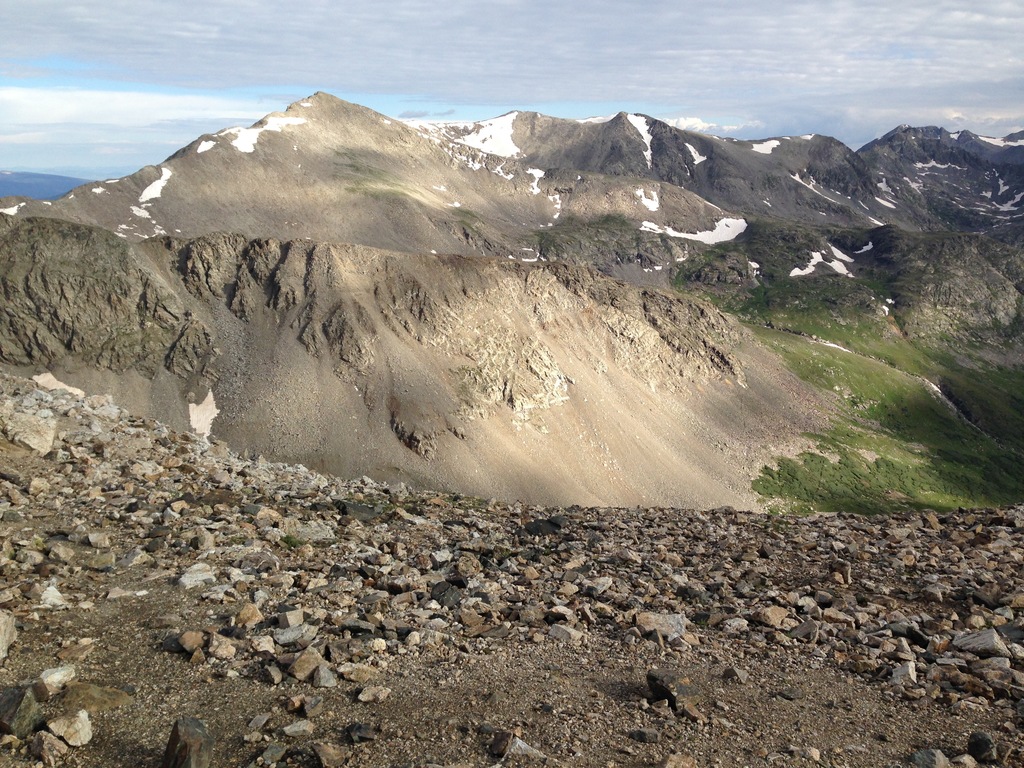