Bouncing Back, Big Plans, and Basically Getting Ahead of Ourselves

I know that going for a “run” that is legitimately only slightly than longer than your normal warm-up isn’t really anything to get all jazzed over, but I am! I’m jazzed! I’ve been a little blue to have missed cross country season, but right now I’m the Queen of the 30 Minute Jog and I’m pumped! Oh, and sore. Sad. I’ve run up Pikes Peak for a training run and now half an hour at 8:30 pace makes me sore. But my foot’s a far cry from what it was 3 months ago (oh, and the 6 months before that…) and you gotta start somewhere, and I started here a few days ago: 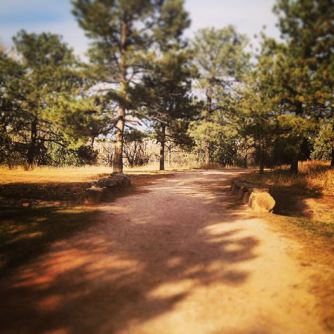 So while I realize that by no means am I “training”, and by no means does a 15 to 20 mile week make it remotely acceptable to stay out of the pool (how unfortunate) for a few more weeks, there is something about coming back from a layoff that suddenly makes me want to set all sorts of ridiculously lofty goals while not really considering what is going to be required to make said goals do-able. Baby steps here, okay? However, I’ve really worked on my psyche and I’ve decided to look at is as though I never really even took a “break,” and it was just the “off-season.” And it was on purpose. And it was all part of the plan. And it will be beneficial. And it’s going to make next year so much better. Right? Right.

So, between the last several weeks of cross-training, graston, Alter-G-ing, applying for my dream job (that I didn’t get or even come remotely close to getting), trying to make a pretty new blog (difficult considering my major lack of technological skills), getting a different job, taking pictures of my cats, and making numerous poor dietary decisions over the last couple weeks, I’ve got a race list! It’s not set in stone, and right now it’s a teensy bit difficult envisioning the steps it will take to get there (Taskmaster will have his work cut out for him and may need a raise…), and maybe I shouldn’t be counting my chickens before they hatch, but what the heck.

That said, it’d be great to blow the pipes out at the Superbowl 5k in February (to register, head over to http://www.pikespeaksports.us/page/super-half-marathon-and-5k-famil...), they made this year’s race shirts out of Peter Maksimow and me, so I can’t just like, not go. It’d be great to jump in some USA XC in Boulder later that month, but that’s pending fitness level and amount of “fluffiness” incurred during my, ah, off-season, and whether I have fully deflated back to my normal size by that time.

Then, skip ahead to May and back to the Black Canyon Ascent! June will see another trip to my second-favorite state (New Hampshire) for another crack at Mt. Washington, July is a big one and hopefully I’ll have my first shot at competing internationally and my first shot at a marathon at the Zermatt Marathon in Switzerland, August I hope to make another run up Colorado’s most dead-sexy mountain, Pikes Peak, and September I sure would like to have a go at a 50k, preferably the Flagline 50k in Bend. Because you know, now that I can shuffle for half an hour a few times a week, it seems like a great time to pencil in a 50k.

And I would prefer to not really think beyond that because LET’S TAKE IT ONE STEP AT A TIME (too late). Oh, and I should add that I’d like to put an asterisk by every single one of those because they are subject to change, deletion, or addition of other things.

So anyway, for now this list comprises the giant carrot dangling in front of my face (although a cupcake would be preferable) to get through the next few weeks of getting back on track. I swear I’ll have a cool/more interesting race review at some point.