(also found on http://bananadeath.blogspot.com)
The Boulder Peak has been around for 19 years. It's a classic race in Boulder with a short, yet challenging climb during the first 7.5 miles of the race. The run course is pretty flat with a few short hills, but it is exposed and it's more often than not really hot. I did the race last year for the first time. Here's my account of the weekend and the 2nd time at the Boulder Peak.

Saturday: Slept in until about 7:20 and had gone to be around 10:30 the night before, so it was one of the longer nights sleeps that I've had recently! Then once I was up, all I could really think is hydrate, hydrate, hydrate. I got a little behind the curve earlier in the week due to some traveling, so anticipating a high of around 90 at the Res on Sunday, I made sure I always had my water bottle with me to drink from, sometimes water, sometimes HEED. It was a busy morning, as I had to take the dog to the kennel, which is about 30 minutes away. She loves it there (Preppy Pet Suites) so it's worth the drive. Then I had to pack, and tried to get a little cleaning done as well. But about 1pm I was all packed up and ready to head to Boulder. Rocked out to some Melissa Etheridge on the way up. Great tunes!

Packet pick-up was efficient (no line) and the pre-race athlete meeting was as well. I was getting hungry so after the meeting I headed out to look for a place to eat. Was thinking Panda Express for the rice and protein, but passed the Whole Foods and figured that'd be a slightly better option (though more expensive). I found a packaged teriyaki salmon and rice dish and a couple veggie spring rolls. Zapped it in their microwave and had a perfect pre-race meal. I killed some time at Starbucks (yay! for free Wi-Fi) before heading to my "homestay" aka Jordan's couch. She was baking scones... 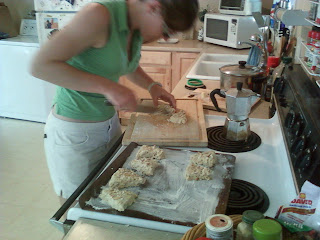 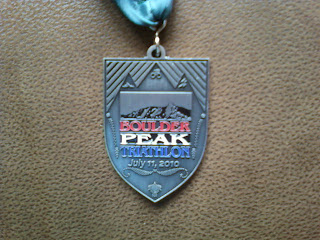 Total: 2:56:34, 40/104 age group (Boulder is a tough place to race!)
OK, so now that you've read (or skimmed) my race report, I have a favor to ask of you. My father-in-law has been recently diagnosed with Parkinson's disease. Because of this, I've turned my ride of the Copper Triangle on August 7th to be a pledge ride for the Davis Phinney Foundation. I am trying to raise $250. That's just ten donations of $25, or 25 $10 donations! Please help me support this organization by making your tax deductible donation today! And I'd be honored if you shared the link with a few of your friends...if you and four friends donated $5 each, I should reach my goal in no time! Thank you for your support. This is the link to donate.