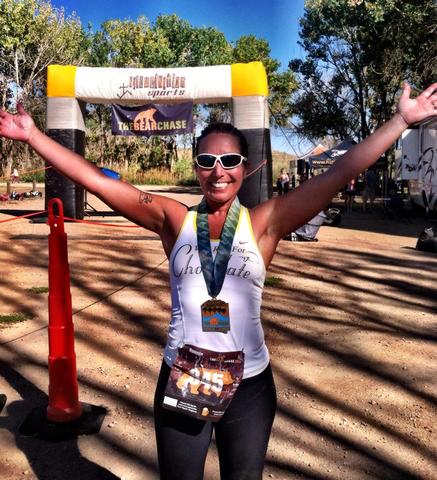 While I am temporarily and partially paralyzed following my first 50K race, I might as well use the time to share my race report from the Bear Chase 50K in Morrison, Colorado. First off, I highly recommend this course to those looking for a first ultra-distance race. The course was tough at times, but forgiving in other areas and the laps allowed you to at least rest, refuel and recover a bit with all your gear in the same place. 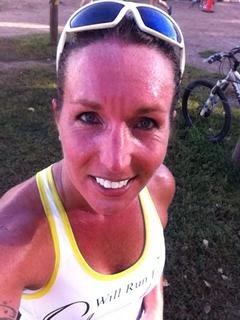 The first six mile lap was literally a good “warm up” since it was a bit chilly at the start, which meant I didn’t fully appreciate the plentiful shade on that half of the course until laps 2 and 3 when they became pure heaven.  After the short first lap, I changed into lighter gear anticipating the longer distanced laps and the heat that would inevitably encompass the back, more exposed half of the course.  I stuffed a packet of Honey Stinger gels in my Spibelt, along with some lip gloss (of course) and went on my way.

I must say that the aid stations on this course were phenomenal and the volunteers were fantastic. You could hardly get within 20 yards of a station when someone was running out to greet you and asking what you might need. Before I could even mumble my desires, a volunteer would promptly grab my water bottle, fill it with electrolytes and spray me down with sunscreen.  I was surprised to learn that although I had been dreaming of the Fig Newtons I knew would be at the aid stations, once I got there and perused the gigantic spread of M&Ms, bananas, cookies, gels and candy, all I could stomach to eat was a tiny slice of watermelon, which tasted like the nectar of the gods every time I found a piece. 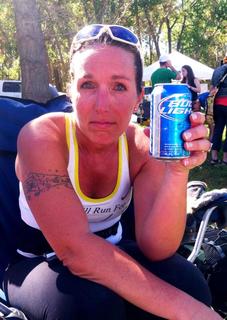 So, before Lap 2, a volunteer had filled my 20 ounce water bottle with some flavor of electrolytes as I went on my way. I was particularly concerned about hydration since it is typically my weakness and I made great effort to sip on the bottle often as I ran. What I found was that I drank far more than I did in training and ran out of fluids approximately 2 miles after every station, cruising into each tent with an empty bottle. While this could be seen a good thing, the fact was this meant  I still racked up several miles without fluids, particularly on the extremely hot areas of the course, for which I was grossly undertrained – having completed most of my training in the cool, morning hours. In hindsight, it would have been better to carry more water on my back so I could more consistently drink and continue to have fluids when I needed it most during the very sunny, unforgiving sections of the course.

The second issue was that in training, I relied upon various training partners to give me the time so I could consume a gel every 45 minutes to an hour, which seemed to work well for fueling at the time. During the race, however, I did not run with a partner, Garmin or even a watch so while I did have a general idea of my mileage based on the laps and advertised distance between aid stations, I had no real concept of time and only randomly consumed some Honey Stingers when the thought crossed my mind, which wasn’t often.  The result was that in nearly eight hours, I only ate one pack of Honey Stingers (I brought four) and a few small pieces of watermelon.  This fact, coupled with the fluid dilemma became a real problem on the final lap, where I probably walked a good 7-8 miles because my hamstrings and calves kept threatening to seize up and call it day. I did, however, save enough of them to run the very last mile because I refused to have a race photo of me walking the finish.

The water crossings were my very favorite part of the course, occurring just after a hellacious ascent of Mount Carbon and a delightful downhill trot all the way to the last shaded portion of the loop. On the last lap, I used my empty water bottle to scoop and pour the cool water all over myself, which will be remembered as the best shower I’ve ever had, albeit extremely poor on achieving any degree of cleanliness. It wasn’t until a volunteer asked if I was ever going to get out of the creek that I realized I had to get on my way and get the race done.

All in all, it was a fantastic race and although I would really like to do another 50K, I’m not sure I have the time to squeeze in the required training any time soon. If I did, I would make an effort to train on more single track and invest in my own Garmin – finally.

I’ve decided I really love the ultra-running family in particular and the laid back atmosphere on the course. The people, the personalities and the camaraderie are tough to beat, not to mention the chance to meet some of the best athletes you will find in a very personal, encouraging encounter. The scenery was spectacular and I even had a surprise, up-close encounter with a very large buck on my second lap. Really and truly an awesome experience. 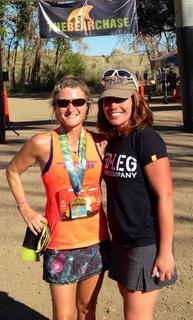 have to thank a ton of people for helping me make it to the start line at all – primarily Tonia Smith and her husband, Steve, who not only tolerated me on training runs, but drove me to the race at 4:30am on a weekend. To my many other training partners along the way, Bethany Garner, Ken Trousdale, Mike Clouse and Jaclyn Roberson – THANK YOU VERY MUCH! To John O’Neill, who dictated my training schedule and kept my spirits up when life got in the way – THANK YOU. Also, to my best friend and husband, Andy Shawver who not only entertained 16 mile runs at 5am on a Saturday, but patiently kept the kids alive and the house standing while I was off gallivanting with friends every weekend under the guise of training. For driving up to see me achieve my goal and waiting hours at the finish line to celebrate - you are the best.