Fretta insists he is Incline's fastest, but admits 'record' debate is part of the fun 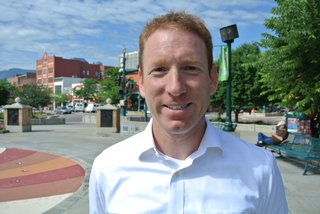 On a cloudy day in 2006, professional triathlete Mark Fretta and Olympic speed skaters Apolo Ohno and Ryan Bradford charged up the Manitou Incline. Hungry for a tough workout, they all agreed to push hard on the steep, mile-long railway bed that ascends for 2,000 feet above Manitou Springs.

“It was a perfect day, it was overcast, you couldn't see the sun,” Fretta said. “There was maybe a little drizzle, so not a lot of people were there. I was trying to see how long I could run (up the Incline) and I remember running until there was 7:42 on my watch.”

(Editor's note: The Incline will be closed for repairs beginning Aug. 18, 2014. Incline users are encourage to get their last climb in by Friday Aug. 15. The Pikes Peak Ascent and Marathon are slated for Saturday and Sunday, Aug. 16-17, Barr Trail will have heavy foot traffic and runners will have the right of way.)

From there he began a quick power hike, consuming the railroad ties and gaining altitude as quickly as possible.

“I remember that I started to skip steps where I could, where they’re not too high, then getting over the false summit and just booking … then blowing up, and then recovering and sprinting for the top,” he said. “It’s a pretty standard strategy. To be totally honest, to begin with I may have run a little up the side, rather than stepping on each stair.”

He stopped his watch when he hit the summit. It read 16:42. To this day it is the fastest known time on the Incline, though some question whether his time should be recognized.

More than five years after Fretta had established his fast Incline time, the United States Anti-Doping Agency (USADA) found “variations” in his blood profile, which had been established by a series of earlier tests. Fretta said his hemoglobin levels tested at 1 percent and 3 percent outside his normal levels during the off-season. The evidence was enough for USADA to suspend him from competition for four years beginning in 2012, though he had retired as a professional triathlete before the sanction. He also said he had been tested “at least 40 times” prior to his record trip on the Incline. There is no record of him testing positive for any performance-enhancing drug.

With the doping allegations, denial and eventual confession by pro cyclist Lance Armstrong, as well as the suspensions of other high-profile athletes, Fretta said he understands the stigma – because he has experienced it - attached to those suspended from competition.

“This is the problem I have with the whole argument - aside from the fact that this (suspension) happened in 2012 and that (the record) happened in 2006 - since when has the Incline been regulated? And since when did we keep track of everyone going up? And if we're going to do this, we need to test the people going for these records. Who is to say this person or that person, when they did this time or that time, wasn't doing anything that could have been ... who knows? There is so much malice without knowledge. Nobody looks at the details, they just group everyone together.”

It’s likely that more athletes will make record attempts since the Incline became legal in February, 2013. Those who set fast times will be on their honor to report the truth, and any “record” may be best recognized as a “fastest known time.”

Now 37, Fretta works as a sports agent in Colorado Springs. He is an attorney, certified by the Oregon Bar. He still loves the Incline, and tells stories of working out there when he was the world’s top-ranked triathlete at the Olympic distance. He also appreciates the athletes who have posted fast times there, including Matt Carpenter, the 12-time Pikes Peak Marathon champion, who has an 18:31 to his credit. And like many Incline users, he is a big fan of Brandon Stapanowich, the ultrarunner who completed 22 roundtrips on the Incline in 24 hours.

“I have the solid numbers, I remember them like they were the other day,” Fretta said. “Apolo was 17:52, and Ryan was 17:41. I remember those two were duking it out and Apolo was all mad because Ryan beat him.”

Ohno confirmed Fretta’s account of their race up the Incline.

“I was there and he schooled us that day,” Ohno said in an e-mail to PikesPeakSports.us. “He was an endurance athlete so he obviously had an advantage. We said we were not racing, but we were always competitive. I know that Mark was at 16:40ish as I could see him at the finish. He yelled back at us when he finished. We really were not too far behind. I know that I had a best time at that point that day and I think it was in the low 17:50's with Ryan just 10 seconds or so ahead of me. “

Ohno said he he eventually hit 17:45 while training with his teammates later that summer, but none of the original fast trio thought about records.

“We knew they were good times,” Fretta said. “We didn't think anybody in our peer group had done this. But talk of records and such didn't begin to materialize until the OTC got serious with it and started putting up these times outside the cafeteria. We started comparing times and slowly from there it became discerned as the fastest time.”

Fretta said there is also a misconception about where he started the clock. Both he and Ohno say they started at the first tie, where the sign is located.

“We walked up the trail from the (Barr Trail) parking lot to the incline, then walked down to the last step and started there,” Ohno said. “A lot of the wrestlers at the Olympic Training Center started their watches at the place where the trail met up with the incline ... we always started from the bottom step.”

Fretta realizes people will form their own opinions, and that’s he’s happy to discuss the record with anyone. “I think it’s important to get all the information out there and let people make up their own minds,” Fretta said. “I personally don't like being challenged on an issue that I don't think is an issue. Other than that, let people say what they may. I guess that is part of the fun, right? It gets people excited about it and I think that's great.”

I think everyone knows Matt Carpenters time is the only legitimate record....