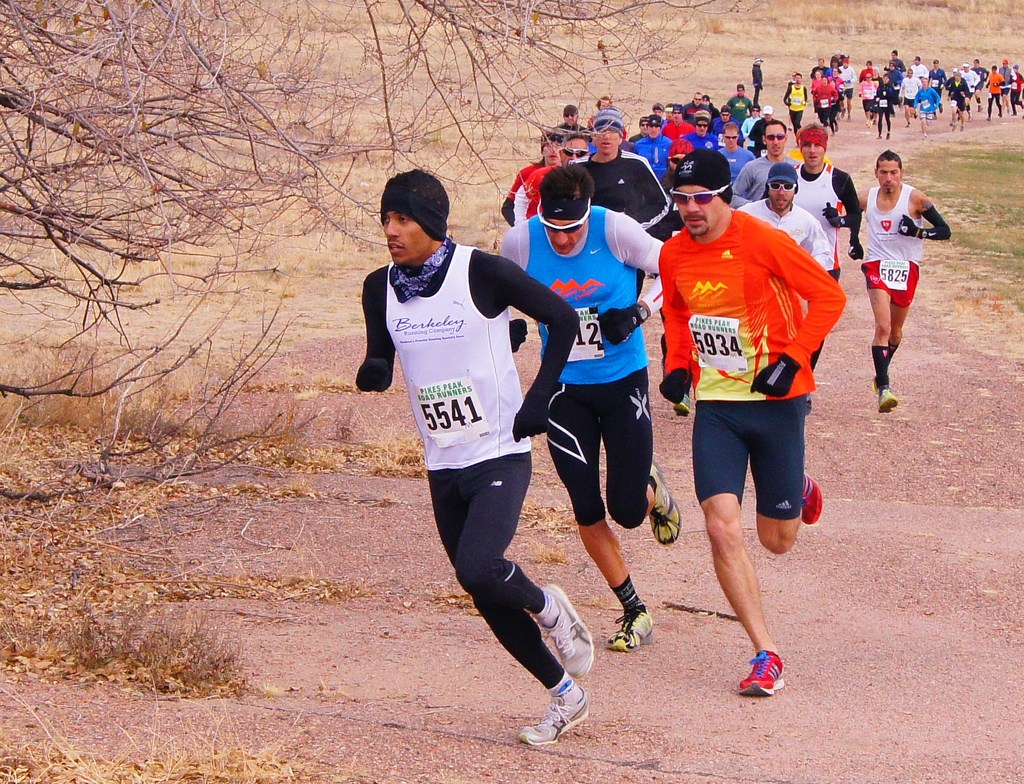 If you enjoy this race coverage, please consider supporting PikesPeakSports.us. Click the "Donate" button, top left on the main page.

Young, 27, of Colorado Springs, won the series final at Palmer Park - a seven-mile romp on the park's famous singletrack - in 46 minutes, 50 seconds on Sunday. The win completed his sweep of all four series races as he captured the series overall title in (2:17:35).

Bar won her second race in the series finale in 56:12  to claim the women’s overall championship (2:49:23) in her first attempt. 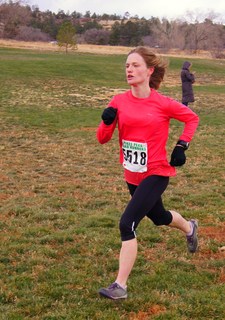 “My husband told me this was the last one so there was nothing to lose,” Bar said. “I just went after it and focused on not falling on the downhills. This was my best race when it came to not falling.”

Considering the cold conditions – it was 25 degrees at the start, rising to 27, with a frigid wind throughout – it was a very strong finish for both. Barr and Young were among many who were stooped over afterward, trying to cough the chill out of their lungs.

“When I started off, I didn’t expect (to sweep),” Young said. “I wanted to try the series so I took each race one at a time. This one was tough because I had a cold and sinus infection and got little training in this week.”

“To get the sweep is really good,” said Ben Klungtvedt, 27, of Colorado Springs, who placed third in Sunday’s race, his best finish in the series, and third overall. “To be that consistent and winning four races in four different conditions is very impressive.”

Kayli Tabares, 13, of Colorado Springs, who placed third in the women’s series last fall, placed second overall in 2012  with a total time of 2:53:45. Despite her youth, she attacked the course Sunday in hopes of overtaking Bar.

“I live near here so my family knows this park really well,” she said.

The course was challenging, but not as difficult as it could have been with scattered snow showers throughout northern Colorado Springs. The dirt trails were dry with no snow or ice.

(Series director) Larry (Miller) took it easy on us today,” said Pueblo West’s Justin Ricks, 32, who placed second on Sunday and was the overall runner-up. “(The challenge) is fun afterwards. During the race, it is not so fun.”

Ilea Eskildsen, 26, of Colorado Springs, was the women’s runner-up on Sunday. She appreciated the challenge of the courses, which included the kneedeep creek run in the series opener at Monument Valley Park.

“It was good and challenging,” she said. “It really keeps you on your toes.”

Volunteers know how much works goes into the race

The people laying out the race course and handling all the details were working in the Sunday morning chill hours before the 11:30 a.m. start.

“Roger Allison once said that once a runner volunteers they never complain about the races again,” said volunteer Rich Hessek, who has helped the Fall Series for about 20 years. “It takes a lot of work.”

Tom Santa Maria, who also helps oversee the kid runs after the adult races, is on the scene until 4 p.m.

They are two of the almost 30 volunteers, including 18 spread out throughout the course, and the rest helping at the start and finish lines, series director Larry Miller said.

Why do they do it?

“My son asked me why I do it and it’s because it’s the thing I do to give back,” Santa Maria said. “I like setting up the kid’s races. I must be getting older because I cannot run with the (faster) kids anymore after running (in the adult race). Soon I’ll be jogging with the toddlers.”