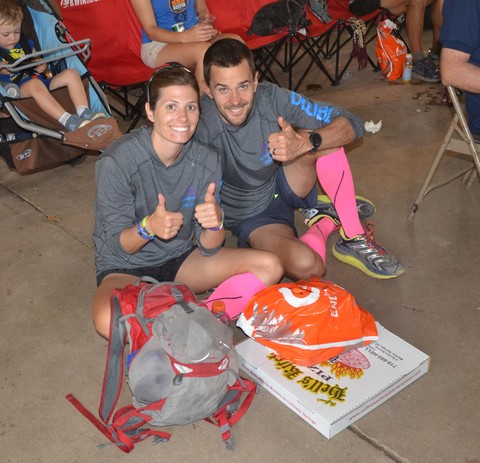 Monica Folts questioned her own sanity while approaching the starting line of Sunday’s Pikes Peak Marathon.

After all, she’d pushed herself through more than 13 grueling miles Saturday to complete the Pikes Peak Ascent. Now she faced another 26-plus miles up and down American’s mountain.

“I felt crazier than ever toeing the line,” said Folts, 31, who has completed the exhausting “double” each of the last four years. “I thought I was insane for getting up and doing this.”

But how did she feel afterward, when she had bested all other female doublers for combined time in the two races?

“I can say now it was fun,” Folts said with a big smile. “I was a ball of nerves this morning.”

Her chances of winning were enhanced when 39-year-old Brandy Erholtz of Evergreen, Colo., pulled out of the marathon. Erholtz, who had a baby earlier this year, felt the Ascent – where she finished sixth in 3:02:12, about four minutes ahead of Folts – had taken too much out of her.

Not entered in either race this year was Kim Dobson, who won both the Ascent and marathon in 2016. Dobson gave birth to her second child a few months ago.

“Kim was out. Brandy was out,” said Brian Folts, Monica’s husband of three years. “We knew this was (Monica’s) year because those two will probably be back.”

“I’ve never had great luck piecing together two good races, so this is sweet,” Monica Folts said. “I’m really happy because I made the podium in my (30-34) age group” by finishing third in the marathon.

Brian Folts achieved one of his major goals by finishing Top 10 in both the Ascent and the marathon. He was seventh Saturday (2:32:35) and ninth Sunday (4:36:17) while doubling for the fifth straight year.

“He ate most of it,” Monica countered.

“After the bus ride down yesterday, I threw up most of the water I drank,” she said.

Plus, trail running is not their forte; they are triathletes who recently earned their pro cards.

“I’m much more of a roadie than a trail runner,” Monica said.

“We do triathlons to stay in shape and test our fitness,” Brian said. “We come here because this is a true test of fitness.”

Collins, 28, from Almont, Colo., is a first-grade teacher in Vail and said she runs simply for the fun.

“It’s all about joy for her,” said Collins’ husband, Matt. “If she feels good, she runs. Some days she’ll go out to run five miles and runs 20; other days she runs five. She doesn’t pressure herself.”

Both Monica and Brian Folts wear pink socks, to honor a friend of his that was killed six years ago.

“She was Brian’s friend, Sally Myerhoff, and she wore pink socks,” Monica said. “She was on a training ride for a triathlon and was struck by a car.”

“The first year I doubled, I lost by about a minute,” she said. “It’s really great to be first this time.”

In the men's race Azerya Tekay Weldemariam of Colorado Springs by way of Eritrea, won the men's doubler title. He placed sixth on the Ascent with a time of 2:31:12, and then knocked out a fourth-place effort in the marathon (4:05:05.)