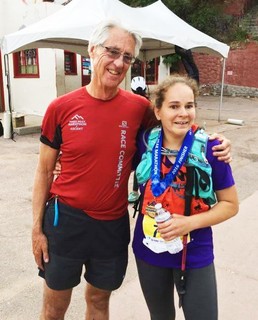 Luanne Burke could not see the finish of the Pikes Peak Ascent, but she could sense it in other ways. She heard the cowbells, the cheering of the race fans and the announcer calling her name as she crossed the finish line. She could feel the mountain’s rocky cap beneath her feet and her lungs begging for more air.

Jessica Beecham ran to the finish of the Pikes Peak Marathon where close friends, as well as race director Ron Ilgen, awaited her arrival. With 26.2 miles of tough trail running behind her, she felt the satisfaction of completing the race known as America’s Ultimate Challenge. And though she couldn’t see the race medal being placed around her neck, she could feel its weight - the weight of accomplishment and significance.

Burke and Beecham became the first known blind runners to complete the famous Pikes Peak races on Aug. 20 and 21. Burke, along with guides J’ne Day-Lucore, a four-time winner of the Ascent who has now raced 26 times on Pikes Peak, and Jessica Oldham Blatecky, reached the summit in 6 hours, 12 minutes, 23 seconds.

“The finish was phenomenal,” says Bruke, 55, a sculpture artists from Nederland. “It was funny. I was starting to cry, but there was no air and I started to hyperventilate. I was like, I can’t cry right now. I’ve gone through a lot of finish lines in my life, but I’ve never been so proud.”

Burke had dreamed of running in the Pikes Peak Ascent for five years when she received a message from Beecham who encouraged her to go for it.

“I figured if the opportunity comes, I’d better go for it,” Burke says. “I’m not getting any younger.”

She climbed the 14,115-foot mountain with the help of a hiking pole and constant voice instructions from her guides. She realized during earlier training runs that beating the 6 hour, 30 minute race cutoff would be difficult. The team focused on every step, climbing as quickly as possible. It wasn’t easy.

“I know every turn and every rock, but this was really scary for me,” Day-Lucore says. “I haven’t been nervous about this race for decades, but I was nervous for this one. For a blind runner to navigate those rocks. It took continuous concentration and focus and commands. Go right, go left. Step up, step down. We never stopped talking.”

Burke’s experience was much different than her regular runs on mild terrain.

“I had to pay so much attention to everything they were saying,” she says. “It’s mentally focusing in a whole different way.”

Though Beecham finished after the marathon cutoff time of 10 hours, Ilgen and race volunteers waited for her at the finish line. She said she was overwhelmed by the support she received as she trained and prepared to tackle Pikes Peak. “It took a whole community of folks just to get me to the starting line,” she says. “I appreciate that so much.”

Dionne Randolph and Mark Lucas guided Beecham to the summit and back, but the crew at Achilles Pikes Peak, a nonprofit serving athletes with disabilities, pitched in as well. Brandon Stapaowich, an ultrarunner and one of the founders of Achilles Pikes Peak, ran with Beecham to the summit on one of her first mountain training runs. Phil Goulding trained with her multiple times. Karen Kantor helped with workout plans and other details. The list is long.

Her father, Doug Beecham, cheered like a wild man at the summit as she made the turn and ran back to Manitou Springs.

“I could hear him from two or three miles away,” Beecham says. “I was afraid the people working at the summit would kick him out because I’m sure they thought he was crazy.”

Beecham, along with blind runner Kevan Worley, started WE Fit Wellness (wefitwellness.com), helping disabled folks to "find accessible, affordable and achievable exercise and nutrition solutions." While running the Pikes Peak Marathon was a personal challenge, she also wanted to show those with full sight what blind runners can do.

“I’m very much of the mindset that blind people can do anything,” she says. “The only difference is how we go about it. I think we as blind people know what we can do. We can set our minds to something and accomplish any challenge. I want to show everyone else that there are more similarities between blind people and others than there are differences.”

Burke ultimately placed third in her age group in the Triple Crown of Running race series, which included the Garden of the Gods 10 Mile Run, the Summer Roundup Trail Run, and the Pikes Peak Ascent. Beecham says she's done with the Pikes Peak Marathon, for now, but plans to run the ascent in 2017.