my heart is going to explode.” - Courtnet Dauwalter 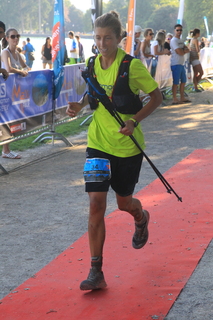 Courtney Dauwalter understands the suffering that occurs in an ultra race. She has experienced many, and she knows the long, midnight trail can be lonely, the physical pain and mental anguish unbearable.

But she doesn't know what will happen when she pushes herself to the summit of a Colorado fourteener, where the thin air will sear her lungs and muddy her thoughts.

She’s about to find out. Dauwalter, the women’s U.S. 24-Hour record holder will compete in the 62nd Pikes Peak Marathon on Sunday in Manitou Springs.

She set the 24-hour mark at the Riverbank One Day Classic in February, covering 155.391 miles while encircling a 400-meter track about 625 times. She maintained a stunning overall pace of 9 minutes, 16 seconds per mile, including breaks.

She described those final historic miles in an interview with irunfar.com: “When I hit 147 and I still had time on the clock, I knew it was possible if I could keep myself moving forward. Then I kind of stopped thinking about it because if you count laps on a track like that, you’ll drive yourself crazy. I tried to zone out as much as I could as I was getting closer to 150.”

She went on to place 22nd in the world championship 24-hour race in July in Ireland.

The round-trip race on Pikes Peak takes runners from Manitou Springs to the mountain’s 14,115-foot summit and back. The course includes an elevation gain of about 7,815 feet as it twists into the clouds. A 32-year-old school teacher at the Girls Athletic Leadership School in Denver, Dauwalter said in early August that she hadn’t trained on the Peak, like other elite runners, or spent much time at altitude. Pikes Peak will be a test.

“I’m excited to push myself a little bit and probably feel like my heart is going to explode,” she says.

Dauwalter is a member of the Salomon U.S. Team that will race on Pikes Peak this weekend, and she is easily recognized by the long, silky basketball shorts she wears while running. With a light, loose stride and a smile on her face, she runs the trails as if she just left a pick-up game of hoops at the YMCA.

“They are just super comfortable for me. I’ve always worn longer shorts,” she says. Like many mountain runners, she built her base as a ski racer. Dauwalter grew up in Minnesota, then attended the University of Denver where she competed on the Nordic ski team. She always loved competing, and when her professional career led her to live in warmer climates, she turned to running. Marathons lead to ultra runs, and success over the long distances soon followed.

She caught the attention of the ultra world with a victory in the 2016 Run Rabbit Run 100, and earned  $12,000 in prize money. Run Rabbit Run travels a beautiful but grueling course that pushes runners through the night at altitudes of 11,000 feet. Dauwalter embraces the mental challenges, and mental fortitude may be her greatest strength.

“I think I’m really intrigued by the roller coaster that you get to ride when you’re out there for that long of time,” she says. “You experience really high highs and really low lows. You hit rock bottom, then bounce back. And six hours later you’re down low again. It’s really good to experience them, and try to work through them.”

She is one of the country’s best distance runners over distances that most people dislike when traveling by car. And she knows Pikes Peak will bring its own brand of highs and lows.

“I think it will be a nice refreshing surprise, all the turns and different parts of the trail.”