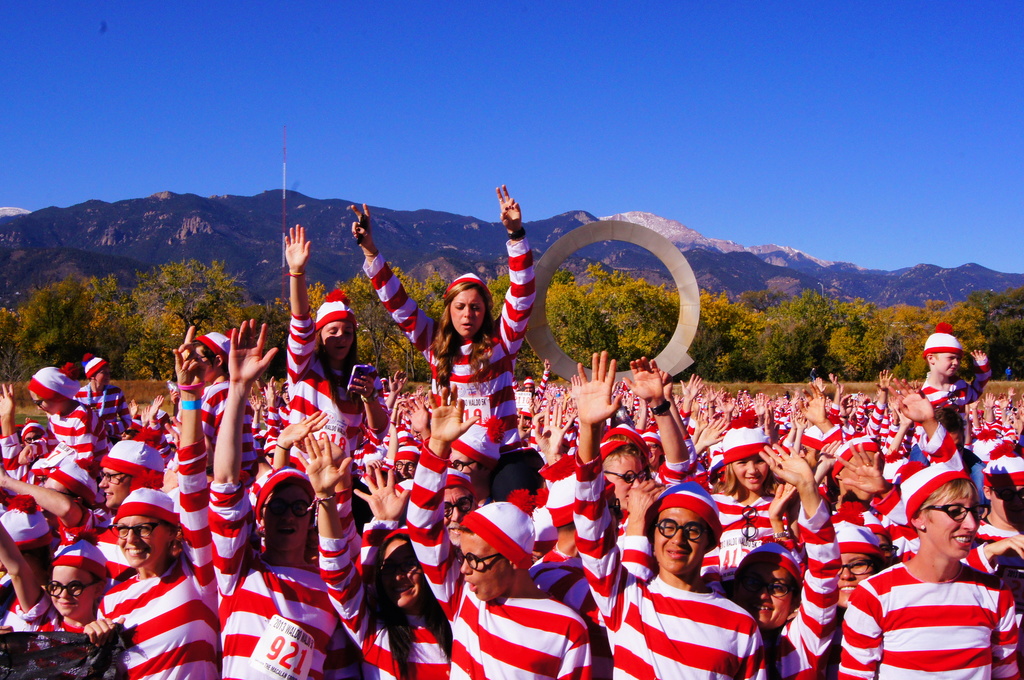 A good and loving father, Ryan Johnson realized that participating in the Waldo Waldo 5K would provide a teaching opportunity and lots of fun for him and daughter Fiona.

Dressed in the iconic red-and-white striped sweater and the large, inquisitive glasses of the “Where’s Waldo” character ... well, it's hard to go wrong with kids.

The annual event has become a favorite of area families. But there is a deeper meaning to the event created in 2012 by Colorado Springs native Chelise Foster. The Waldo Waldo 5K gives back to the community.

This year proceeds from the event will go to the Trails and Open Space Coalition and the Rocky Mountain Field Institute, organizations working to maintain trails and restore public access to areas ravished by fires and flooding in recent years.

Johnson said there is no better reason to participate in the Waldo Waldo 5K.

“I think that, more than just about any location in Colorado, Colorado Springs holds some of the most treasured and fragile trails and open space,” he said. “It is of the utmost importance to protect them, which is why TOSC and RMFI are so valuable. They are the reasons many of our open spaces are available for use in the first place.”

He has gently informed Fiona, 7, about the reasons for participating in the Waldo Waldo 5K, lessons that will long be remembered.

“She was pretty quiet about it all, because I think she still remembers how traumatic and scary the Waldo and the Black Forest fires were,” Johnson said.

The story behind the creation of the Waldo Waldo is as fascinating as the event itself. Foster, who works at the costume company Elope, had the idea of dressing in Waldo’s red-and-white on a hike in Waldo Canyon a month before the massive fire devastated the area.

“I mentioned to my family during the hike that I would like to get our family and some friends dressed up as the character ‘Where’s Waldo’ and help clean up the trail,” she said in an interview PikesPeakSports.us last year. “Before we got around to doing anything like that, the fire started.”

More than anything, TOSC works to keep trail access and development in the news and on the agenda of local government. It currently is advocating to open Waldo Canyon and Jones Park (areas closed after the fires and floods), as well as complete a section of the Ute Trail near Cascade.
Forming a partnership with the Waldo Waldo 5K was an easy decision, said TOSC Executive Director Susan Davies.

“I can remember when they came to us and asked if we’d like to be part of it and we said yeah, this is great,” Davies said.

The Rocky Mountain Field Institute is “dedicated to the conservation and stewardship of public lands in Southern Colorado,” specializing in trail building and maintenance, and fire mitigation and restoration. With a youthful volunteer base of about 2,000, it’s common to see RMFI crews working on trails and stabilizing hillsides in burned areas.

Though next year’s projects aren’t set, there is a chance that the Forest Service will ask RMFI to help build infrastructure protection to prevent further damage of the Waldo Canyon trail.

The Waldo Waldo 5K was an immediate hit in 2012 as Colorado Springs residents were excited to help the community heal from the unprecedented damage caused by the Waldo Canyon Fire. Last year, race organizers set a goal of beating the world record of 3,873 Waldos in one place. Though the final number of runners was about 2,700, the world-record goal remains, and current registration numbers indicate that 2014 will be even bigger.

Ultimately, Johnson said, it’s about supporting those who support the area’s trails system, a crucial element for a community of hikers, runners and cyclists that takes pride in its outdoor lifestyle.

“TOSC and RMFI are the guardians of our open spaces, and ultimately, they are the ones who nurture our open spaces back to health, so poignantly displayed by the areas devastated by the Waldo Canyon Fire,” he said.