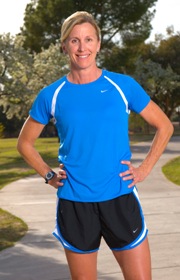 It has been 26 years since an American has won the Boston Marathon.
Colorado Springs resident Lisa Rainsberger is that runner. Her name then was Lisa Larsen Weidenbach. She was 23, a fantastic athlete relatively new to the elite field. She finished in 2:34:06.

As thousands of runners from around the world, including 59 from the Pikes Peak Region, prepare for Monday's 115th running of the race, Rainsberger took some time to speak with PikesPeakSports.us. Tears came to her eyes as she reeled in memories of a day that changed her life.
This, she says, is how it all went down.
New England spring days are not all that warm, but the temp soared to 72 degrees as the elite runners toed the starting line. It was nothing like the weather she had trained in.
"It was a surreal day," she said. "You train through the winter and it's cold and you are all bundled up. Then I wake up on race day and it's balmy outside. It created a disorienting feeling for me and everybody else."
The race also began at noon, so that the bulk of the field would pass by Fenway Park just after Red Sox game had ended.
Rainsberger was nervous. She had finished fourth in the 1984 Olympic Marathon Trials and knew the side effects of 26.2 miles.
"It's always nerve wracking because it's painful," she said.
Rainsberger was sponsored by Saucony, and the Boston TV station WBZ hired Saucony team manager Dave McGillivray to run along and interview Rainsberger during the race.
"He was all wired up for the local TV station," she said. "But by my eighth mile I was gone and he was out of a job. I was grooved. I was dialed in and with the crowds and the atmosphere ... luckily, I didn't self destruct."

Those familiar with McGillivray know him as the current Boston Marathon race director.
Rainsberger admits that the competition was thin that year. Lynne Huntington of Texas finished second in the women's race, eight minutes behind. Rainsberger never saw her.
"When the gun went off, I was going to win," she said. "I went out fast. I went hard. The start is downhill, so I took control early."
The next several miles - ran on a downhill slant - flew by. And then came Wellesley College and it’s all female student body.
"Back then they didn't have snow fencing or crowd control," Rainsberger said. "The women of Wellesley created a tunnel of people that we ran though, like on Alpe d’Huez, just crowded in on the road," Rainsberger said. "It was narrow and they did high fives and slapped my butt, and they were just screaming. I
wasted some energy there but it was exciting. To be the first woman through Wellesley is memorable."
Whatever psychological boost Wellesley provided, it soon ended as she race through Mile 16 and 17 where the grade tilts up just enough to make a difference.
"Right there I realized, man I have nine more miles to go," Rainsberger said. "It changes your stride. People think Heartbreak Hill is the defining point - and it is for many runners - but this was a tough place for me."
Rainsberger arrived at Heartbreak before she knew it and the sun began to burn her energy.
"I remember how hot it was on Heartbreak," she said. "Back then they only had water every 5K - we're predating Gatorade. I was 5-10 and 130 pounds and it was hard. I was depleted, just grabbing things from the crowd, orange slices, whatever I could get.

"I trained on the course, spent time running each of the segments. In training it doesn't seem like that big of a deal. But I was a third of the way up the hill (Heartbreak) and I'm thinking, 'OK, where is the top?’ But the thing about it is, once you get to the top, you don't have the luxury of an immediate down. It flattens out for a mile or so, and then you go down a little."
For the first time, her pace began to slow. She focused on a Citgo gas station sign, a reminder that the end was near.  At some point toward the end, her coach, Ron Warhurst, shouted out some encouraging words. She was ahead by eight minutes. Good thing.
"I was seeing little black spots. I was totally sugar deprived. I look at pictures of myself and I am white. I just kept telling myself, 'I have to get the job done."
Every stride hurt, but the pull of the finish line and the noise of the crowd kept her moving.
"When you finally make the left-hand turn onto Boylston Street, it's just insane," she said, "The last mile, I think I was crying then and I'm crying now talking about it."
She crossed the finish line with her arms raised to the sky. Rainsberger was the 15th woman to win in 20 years. Roberta Gibb and Sara Mae Berman each won three times from 1966 to 1971, though their victories are still listed as unofficial because there was no women's division. Joan Benoit won it twice. Rainsberger was the tenth American woman to win.
At the finish, overwhelmed by emotion and physical exhaustion, she tried to keep it together.
"I remember I apologized for running so slow," Rainsberger said. "But it was so hot, everybody was slow.
"I remember taking it all in, being the queen. I thought, yeah, I'm prepared for the attention. Hopefully, I held myself well and didn't offend anyone. By the time I was done with the race and press conferences and what not, I was hungry and tired. I talked to my parents on the phone. They watched on TV, the race was televised then."
Everything changed that day for Lisa Rainsberger.
"One day I was a good runner, the next day I was the winner of Boston. Everybody knows this race. It solidified me as a legitimate athlete."
Rainsberger later claimed two victories in the Chicago Marathon and two more fourth-place finishes in the Olympic Marathon Trials (1988, 1992).
She is the mother of four, married to Bud Rainsberger. As the founder of Training Goals, she coaches elite athletes with Olympic aspirations. She also conducts the Kokapelli Kids running program.