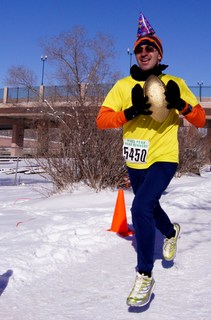 By Bob Stephens
PikesPeakSports.us
Simon Gutierrez was in a celebratory mood as he crossed the finish line Sunday at the third annual Super Half Marathon and Game Day 5K in Colorado Springs.

The 47-year-old won the 5k men’s race, but the event also marked the day he met his girl friend, Donna Garcia.

“We met at this race last year and I paced her,” Gutierrez said. “That made this a special day for us.”

Like many of the runners and walkers, Gutierrez was in a festive mood on Super Bowl Sunday. He clutched the race's famous "gold football" as he crossed the finish line, an honor reserved for only the winners of the 5K and half marathon. Many runners wore Denver Broncos clothing – one family was decked out in Seattle Seahawks garb – and Gutierrez wore a “Happy Birthday” pointed hat over his stocking cap, to honor his friend, Amy Perez. While Garcia, who sported a Broncos stocking hat, was second in the women’s 5K, Gutierrez (17:34) set Masters and age group records despite less-than-ideal conditions. When the races began, the temperature was 16 degrees and the course was snow-packed.

“We’ve been training in it every day, so we’re used to it,” Gutierrez said, “but it wasn’t a good day for fast times. It was fun, though, and I wanted to support this race, PikesPeakSports.us and the Pikes Peak Road Runners.”

Shannon Payne, 28, also carried the gold ball across the goal line as she won the women’s 5K and tied the course record (19:10) set last year by Amanda Ewing. 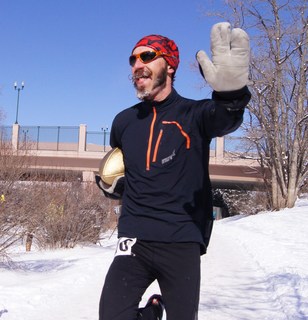 “Today was more about effort than time,” said Payne, who finished fifth overall.

“When I saw the forecast, I knew it would take a hard effort and the course record of 1:14 wouldn’t be possible in these conditions,” Maksimov said. “But I wanted to run because I wanted to support PikesPeakSports.us, which is a great organization that does a lot for our community.”

Payne, who is from Franktown, ran for  UCCS and has lived in Colorado Springs since college. She works for the Boulder Running Company and runs for the BRC elite Adidas team. Like Gutierrez, she used the race as a tune-up for the USA Cross Country Championships scheduled Feb. 15 in Boulder. Her best at that race is 14th, while Gutierrez, who ran collegiately for Arizona, won the Masters division in 2009.

“To be in the top 10 would be great,” Payne said. “There are a lot of great runners there.” 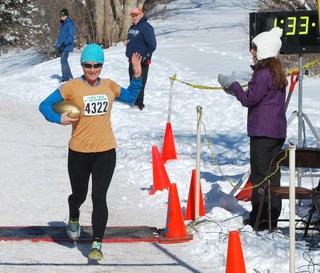 He had high praise for Payne, who he said has been hampered by injuries.

“She could be national class,” Hill said. “She’s immensely talented. She has a diesel engine in a small frame.”

Maksimov, 35, of Manitou Springs, who set an age-group record, finished with ice covering much of his handlebar mustache and goatee. He was 89 seconds ahead of runner-up Tripp Hipple, 26, of Denver.

“It was a day fit for the Super Bowl,” Maksimov said of the weather. “I tested the waters at the beginning and realized it wasn’t a good day to go fast. It was sloppy and slippery for a half-mile about halfway through. It was a little windy on the way back in. I was doing high 5:40s (per mile) on the way back."

Thelen, 34, is a physical therapist who ran for Harrison High School. She ran two years for Northern Colorado where Ewing was her teammate for one year. Ewing was second in the women’s half marathon.

“This was a lot harder than I anticipated because of the snow,” said Thelen, who used the race as training for a 24-hour bicycle race she’ll do with her husband in Tucson, Ariz., in two weeks.

“This was fun,” she said. “It’s a nice break in the middle of winter.”