Take 5 in the Garden course challenges all ... even the winners Men's 5K winner Simon Gutierrez (in white) and Sean Brown, the five-mile champ, led the pack up the first hills in Saturday's Take 5 in the Garden. 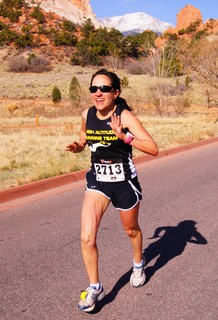 After a last gasp of winter earlier in the week, runners Saturday were met with a picture-perfect spring day at Garden of the Gods.

With the iconic red rock formations and snow-capped Pikes Peak as the backdrop, hundreds lined up just inside the main entrance to take on a hilly 5K or five-mile course around the park for the annual Take 5 in the Garden race.

Runners were in high spirits as they began the climb up Gateway Road and then onto Juniper Way Loop, following the road around the Gateway Rocks and — if they were doing the 5K — looping back to Gateway Road, where the uphill start became a welcoming downhill to the finish line.

Those running the five-mile added an out-and-back to the course, running down towards Balanced Rock before turning around and rejoining the 5K route.

“Nice course ... I preferred the downhills!” one woman chuckled after completing the 5K.

The winners made the steep course look effortless, with female 5K winner Donna Garcia of Colorado Springs flashing a smile as she cruised to the finish line almost a minute ahead of her nearest competitor.

“I didn’t have a race plan,” Garcia said. “But if I could get through the first mile, I knew I’d do well.”
Garcia, who finished in 22:05, was surprised to take home the women’s crown.

“I wasn’t expecting to win ... but I like to joke that if the good runners don’t show up I have a chance!”
With several strong race performances this year leading up to Saturday’s race, including a recent win at the XTERRA Cheyenne Mountain State Park 5K, it’s safe to say that if Garcia is competing in a race — a good runner has shown up.

Karin Lundin and Nadine Garcia, both from the Springs, came in second and third with times of 23:01 and 24:04 respectively.

Men’s 5K winner Simon Gutierrez, a mountain runner who has made a career of running up tough  hills, relished the steep incline at the beginning of the race.

“I was looking forward to the first mile,” Gutierrez said.  “I like the uphill.” 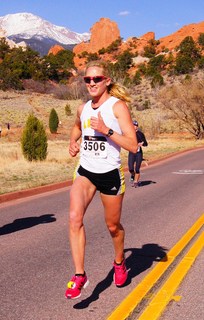 That’s perhaps a bit of an understatement from the three-time winner of the Pikes Peak Ascent.  Gutierrez added another victory to his lengthy resume Saturday, holding off Dan Vega for the win.  Gutierrez finished in exactly 17 minutes, with Vega running in at 17:16 and Andy Rinne rounding out the top three in 17:37.  All three are local runners.

U.S. Army Captain Kelly Calway had been struggling to juggle training into an already jam-packed schedule.  With 170 soldiers under her, a 5-year-old daughter, and a husband who just finished an overseas deployment, racing had been on the backburner for the last few months.  Rolling out of bed and deciding to run at the last minute, Calway took the women’s overall prize in the five-miler in 30:55, missing the course record by six seconds.

Calway, who usually races at sea level, said the altitude made the race challenging.

Rochelle Persson of Colorado Springs took second in the five-mile race with a time of 32:46.  Amanda Occhi of Manitou Springs was third in 33:21.

On the men’s side, youth was the story of the day, with two of the top three men not even out of their teens.  Nineteen-year-old Bryce Gregoire of Falcon finished second in 27:22, while 13-year-old Connor McCabe of the Springs came in third in 30:19.  Sean Brown of Colorado Springs was the male winner, squeaking in just under 27 minutes with a 26:59 time.

The general consensus among finishers was that the course was one of the toughest in the region—but also one of the most beautiful.

“We couldn’t have asked for better weather,” 5K winner Garcia said.  She thought every runner should feel proud of their effort.

“It’s challenging ... we all need to feel really good about our times. That start is hard!”

Take 5 in the Garden is the second of five races in the Grand Prix of Running series.  The next race is the Sailin’ Shoes 5K/10K on June 15.