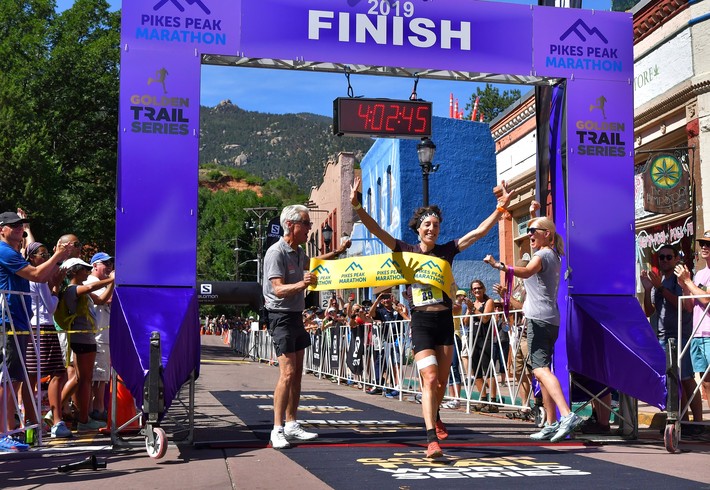 Switzerland’s Maude Mathys, 32, set a new Pikes Peak Marathon women’s race record on Sunday, ascending to the peak's 14,115-foot summit and back to the finish in Manitou Springs in 4:02:41.

Mathys placed 16th overall in the 64th running of the internationally famous race on America's Mountain.

She was primed to do something special. It was her second course record in a major event in two weeks She set the women's record at Sierre-Zinal in the Swiss Alps on August 11.

Although Mathys fell about five minutes after she left the summit on the downhill, she quickly made up for any lost time. “I felt good on the summit and then fell on some rocks,” she said of the wreck that left her hands and legs bruised and bloody. “But then I turned that off in my mind and kept going.” Mathys, who said her favorite part of racing is the “very steep uphill,” hit the summit in 2:29:03, the second-fastest ascent time in Pikes Peak Marathon & Ascent race history. She descended in 1:33:38.

"If I train more at altitude, I would consider coming back,” she said of taking on the Ascent.

Gusty winds reaching 40-50 miles per hour whipped the last few miles of the course, according to Race Director Ron Ilgen. But heat was the bigger story, as racers made the downhill trip back to Manitou Springs in temperatures that reached the 90s.

Yngvild Kaspersen, 24, of Tromso, Norway, placed second in her first Pikes Peak Marathon with a time of 4:27:06. “I wasn’t expecting to follow Maude today, but my body was feeling really good,” said Kasperson, who also does road and track running, and skis as part of her training. In third place was Meg Mackenzie, 33, of Cape Town, South Africa, with a time of 4:32:19. “The last part of the race was like going into a cauldron,” said McKenzie, an ultrarunner who has won the South African Long Distance Championships, the African X, and the Ultra Trail Cape Town 65K.

Though “it felt like everything was moving in slow motion as I got near treeline because of the altitude, I gunned it coming down and started feeling a lot better,” she said.

She also agreed with Mathys in saying how much she enjoyed racing in Manitou Springs. “Everyone is so friendly and cheers you on as you get near the finish. It’s such a nice small town and reminds of Cape Town and a lot of the racing I do there. I would definitely come back to do this race again.”