Emily Forsberg won the Pikes Peak Marathon on Sunday with a time of 4 hours, 26 minutes and 7 seconds. 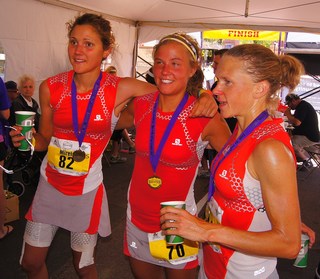 By Monica Smith and Tim Bergsten

After they had raced about 25 miles on Sunday, the Pikes Peak Marathon became a two-woman sprint to the finish for Emelie Forsberg, 25, of Sweden, and Kasie Enman, 32, of Vermont.
Forsberg trailed by several minutes at the 14,115-foot summit of Pikes Peak. But she used superb descending skills to catch her Salomon teammates Mireia Miro and Enman on the famous "W's" switchbacks just above the finish line in Manitou Springs.
"I reached the summit and I was maybe 10 minutes behind them," Forsberg said. "I didn't have in mind to catch them, even though downhill is my specialty."
Enman, the 2011 World Mountain Running Champion, gave chase in the final mile, but didn't have the speed to stay with Forsberg who dashed away to win in 4 hours, 26 minutes and 7 seconds. Enman followed in 4:26:25.
The victory was a surprise for Forsberg, who said she was hoping to finish in 4:40.
"I can't believe it, because I didn't have it in mind at all," Forsberg said. "It's very fun, but I don't expect to win. I just want to be out in the mountains. And if I sometimes win a race or do good, it's just a plus."
Enman, who lives in Vermont, had never run for as long, or at such a high altitude before her Pikes Peak attempt. She said the thin air made her nauseous.
"The whole time on the downhill I felt like I had to vomit," she said. "I couldn't go the pace I wanted. I just felt sick. Of course, I'm completely unacclimated."
Enman won't soon forget Pikes Peak, which can humble even the best mountain runners. But she was ready for anything.
“I’ve run marathons before, but none that take 4:30 at least,” Enman said. “And I don’t live or race at altitude. So my expectations were kind of wide open.”
Miro, 24, of Barcelona, led most of the race, but ended up finishing third (in 4:32:13) after experiencing severe stomach pains on the way down.
“About seven miles from the finish, I started to get a very bad stomach ache and had to stop,” Miro said.
Miro, too, was not sure what to expect with this race. She said it was her first marathon in a year and she was using it as a test since she is recently coming off a tendon injury.
Enman said the teammates knew the race could belong to any of the three of them because they've exchanged first-place finishes this summer.
Michele Suszek, 30, of Littleton, the 2012 U.S. 50-mile Trail Champion, finished fourth for the women in 4:42:38. Lauren Jeska, 37, of Great Britain, finished fifth in 4:47:28.
The top eight women finished with times faster than last year’s race winner.