MANITOU SPRINGS - Road racers. What are you going to do with them?

Brittany Charboneau who placed 13th in the U.S. Olympic Marathon Trials in February, says she was reluctant to try trail and mountain running because she was “afraid of nature.”

One thing she doesn’t fear … the pain cave at 14,000 feet on Pikes Peak. Charboneau, a 28-year-old Denver resident, won the 65th Pikes Peak Marathon on Sunday. And she did it the hard way, by sticking with Allie McLaughin (who has the third-best Pikes Peak Ascent time in race history)  on the 13-mile climb from Manitou Springs to the summit of Pikes Peak.

About 40 seconds separated the two when they made the turn at the top. From there, well it’s all downhill. And that’s where Charboneau won it.

“I practiced a lot of downhill running,” Charboneau said. “That’s my reward. I tell myself, you've earned this, so just fly.”

Charboneau reeled in McLaughlin and charged down Pikes Peak's rocky moonscape. On historic Ruxton Ave., the home stretch, she raised her hands to the sky and hit the finish in 4 hours, 25 minutes, and 21 seconds, the 10th fastest women's marathon time since 1976 when the race startling line was moved to Memorial Park in Manitou Springs.

With or without the bears and mountain lions, the road racer has taken to the mountains and is undefeated in her first few races, including the 2019 Leadville Heavy Half. And she recently set the Fastest Known Time (5:15 and change) on the famed Four Pass Loop, 27 trail miles around the Maroon Bells 14ers with 8,000 feet of elevation gain.

"I’m just having so much fun with it," she said. "Road racing is out of question this year, but I learned to love trails so much. They're so different, but I think they really compliment each other so well. I’m using road strategies on trails, and mentally, all the work I do on the road is translating really nicely on trails."

Ashley Brasovan, 29, was third at the top, but a mad charge on the descent brought her home in second place in 4:34:59. McLaughlin, the 2014 Pikes Peak Ascent champion, crashed three times in the gravel and rocks while descending, but held on for third place and finished with her shins coated in blood.

“I just kind of loved today,” McLaughlin said, smiling as a medical team sewed up gashes in her left knee and right hip.

"Those were some tough conditions," Brasovan said. "With three miles to go it felt like it was in the 90s and I was splashing water on myself and pouring it on my head." 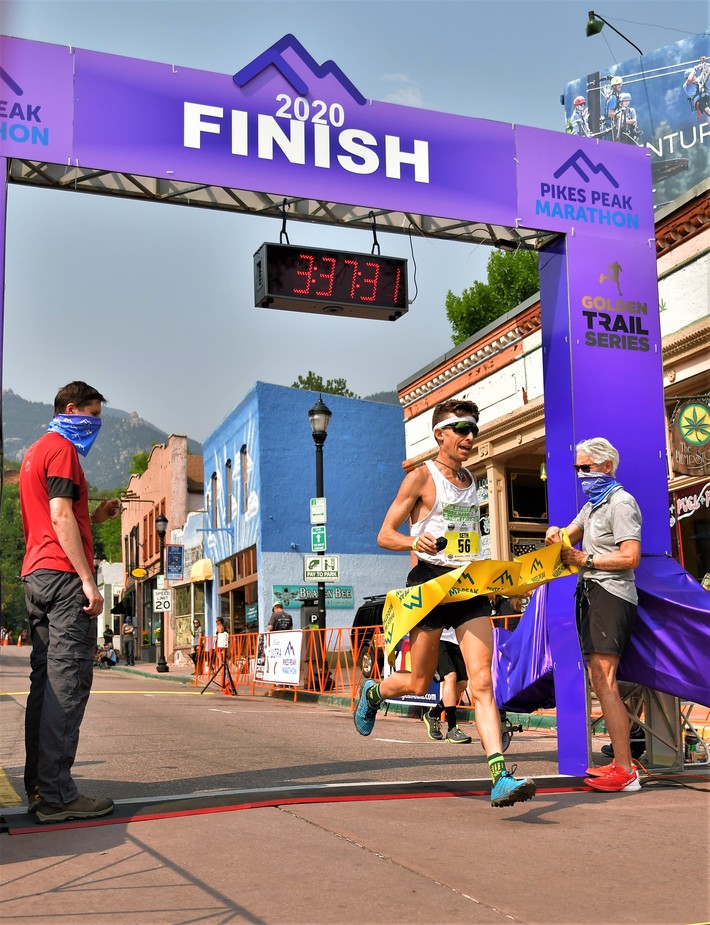 All three runners competed on the 2019 U.S. World Mountain Running Team, and DeMoor and Wacker were college cross country and track teammates at CU Boulder. They knew what to expect. Wacker would take an early lead and challenge everyone else to keep up.

“I was pretty confident Andy would take off,” DeMoor said. “I caught him at Mile 2, and just started chugging. I had my game plan written on my arm – reminders for me to stay focused.”

DeMoor's ascent time of 2:09:29 provided a big advantage as he bounced down Barr Trail's 16 Golden Stairs below the summit, gaining time on Sinclair and Wacker.

“Honestly, it was a great uphill effort,” he said. “I cut two minutes off my ascent time of last year. I felt really strong the whole way up. But I had a few little stomach issues downhill.”

Though he trailed the leader by seven minutes at the summit, Sinclair stormed down the mountain in 1:21:39 – the fastest descent of the day - to close the gap. DeMoor, meanwhile, was confident he could win, but there would be no early victory celebrations.

“They only thing I was aware of was I know he’s fast and I knew he’d be coming, but I also knew I had a pretty good lead,” DeMoor said.

Running in a pandemic: After two years of hosting the Salomon Golden Trail World Series and the top mountain runners from around the world, the 2020 Pikes Peak Marathon looked much different during the Covid-19 pandemic. Organizers stripped away nearly all race activities and worked for months to ensure the safety of all runners. With a plan in place, Pikes Peak Marathon, Inc. was granted permission to host the race by various state and local health and government agencies.

Pikes Peak Marathon, Inc. had cancelled the Garden of the Gods 10 Mile & 10K Run in June, The Barr Trail Mountain Race in July, and the Pikes Peak Ascent, the same weekend as the the marathon. 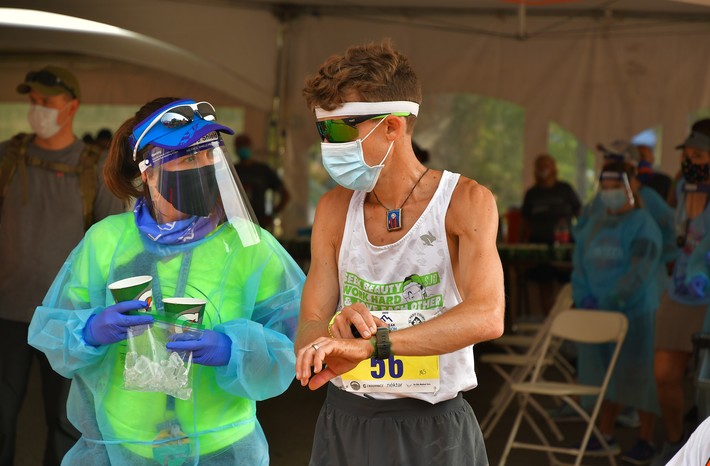 "They pulled it (the marathon) off and I commend the organization for letting us runners chase down our dreams in a crazy year,” DeMoor said.

They could have easily called it and cancelled, but I think we’ve all learned a lot since the pandemic started around the world and across the U.S. You know, everything from masks to hand sanitizer to social distancing. It’s allowed us to become smarter as a global running community to pull off a race like this.”

The decision to host the event came with criticism from some long-time Pikes Peak runners concerned about the spread of Covid-19, the country’s most deadly pandemic in 100 years.

Women’s race winner Charboneau, however, was grateful for the opportunity. It meant a little more to win in such a challenging time.

“It does mean more because you have to think about how grateful I am that we’re able to run and compete,” she said. “We’re still able to run and they’re making it work and showing adaptability and I think they did such an amazing job being adaptable and just finding a new normal and making it happen for us.”