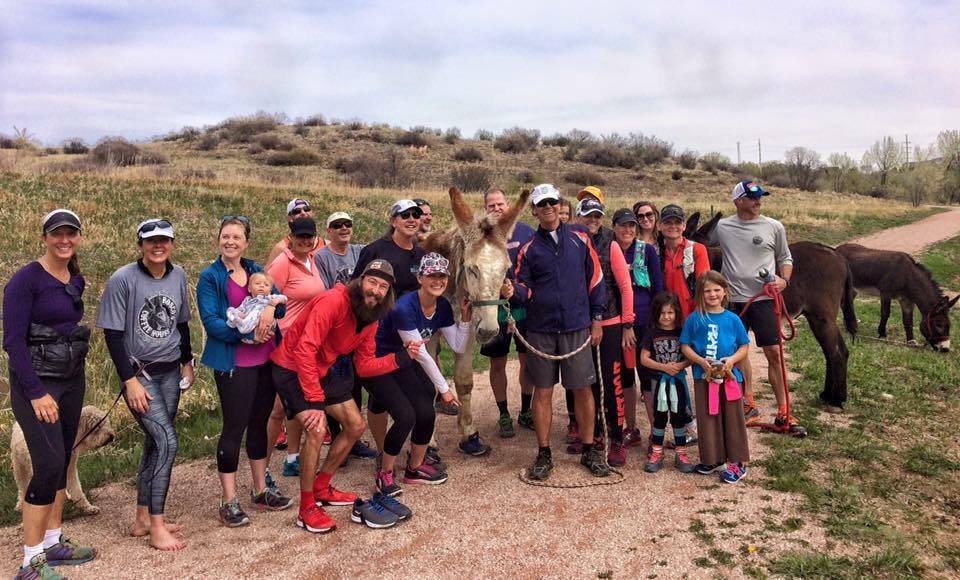 I was returning home after riding my bike over on the west side and had just started the turn from Bijou onto Walnut street when I spotted a guy walking a very large donkey down the street. I hadn’t been in the Springs for very long and my first though was to snap a photo and send it to friends. However, by the time I got my phone out from my jersey pocket they were now standing at the corner next to a newly opened coffee shop that I had been meaning to visit. 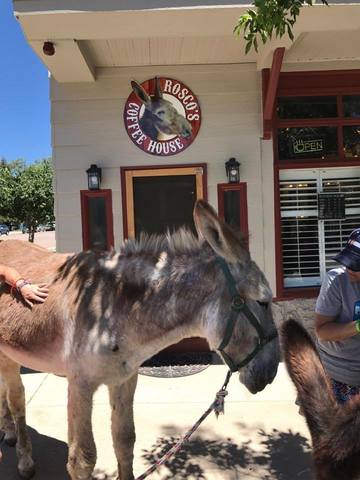 I turned my bike around and peddled over. I asked if I could pet his donkey, and he said of course.  I asked him the donkey’s name to which he gave me a funny look, pointed at a “ginormous” sign on the coffee shop that said “Rosco’s Coffee House” sporting a very large photo of the very donkey I was facing (yeah sometimes I’m not the quickest guy on the corner). It turned out I was talking to Tony White, owner of Rosco’s Coffee House. We chatted for a time, talking about running, biking and swimming as well as the Colorado Summer Heritage Sport called Pack Burro Racing, burro being the Spanish word for donkey.

Fast forward about six months and I began my journey of training for my fist pack burro race.  For those who aren’t aware, pack burro racing is trail running with a donkey.  Riding the donkey is not allowed but as the joke goes, the donkey may ride you!  Basically, you team up with the donkey who must have a pack saddle that carries a pick, shovel and gold pan and must weigh at least 33 pounds.  The sport is a Colorado tradition having been in existence for at least 69 years. Race distances range from around six to 29 miles and all happen in and around historic mining towns (think Fairplay, Leadville, Buena Vista).

As it turns out, Tony owned not one, but two donkeys, and was willing to loan one to me. He introduced me to Mordecai, or "Mordy," and went about teaching me how to run with a donkey or “go donkin’ as Tony likes to say.  I like to say that Mordy is my “borrowed burro”, he is a standard sized donkey who has two claims to fame.  Mordy was the Mascot for the Democratic National Convention in 2008 and also has his name on a plaque in Fairplay as the World Champion in 2006.  In other words, Mordy knew what he was doing.  I did not. Thankfully, Mordy was really training me!

Rosco and Mordy are stabled in Manitou and along with Cash, owned by Mike Vann.  We regularly run on weekday evenings.  One day after bringing my friend Dionne Randolph along for a run, we started talking about forming a weekend running group. Although there is such a rich running community here, I felt there was a bit of a hole for the weekend runner who didn’t necessarily want to run up the Incline or Barr Trail. 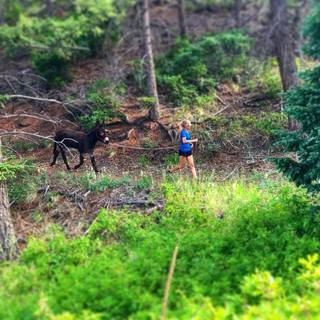 We envisioned a club that would meet in rain, snow, or the heat of summer. We focus our Saturday run around  a 10-mile route on the Santa Fe Trail which is easily shortened or lengthened depending on the need of any individual.  We also have group trail runs that vary in location and we strive to bring the donkeys out around once a month depending on both weather (we don’t run the donkeys if it's icy) and the summer burro racing season.

Tony offered his shop as a meeting place and we struck a deal that if folks ran with the group five times and visited the shop for coffee after each of those runs, Tony would give club members a 10% discount in the shop and provide a free running shirt.

(For more info, check out https://www.roscosrunners.com/, or e-mail E-mail Roscosrunners@gmail.com)

What does the Rosco's Runners Club do for members besides offer a place to gather for the ritual of the weekend long run and some fun socialization? By bringing the donkeys out in public we interact with people on the trails, they ask us questions and we can clarify some of the misconceptions about these animals such as donkeys aren’t stubborn, they are merely cautious.

Running with these wonderful animals is also a gift on a much deeper level, and oddly enough a more human level. When running with a donkey, one must be unplugged from technology and in tune with the environment and the donkey's reaction to the environment which puts us in tune with nature. The donkey is the conduit to that connection.

More importantly to me is that learning and mastering donkey running requires kindness, empathy and patience. The donkey just isn't gonna do what it is afraid to do.  To teach someone else how to run with a donkey provides a conduit for human-donkey empathy to human-human empathy and deepens our relationships as humans. The donkey is the intermediary. Besides, running with the animals is just plain fun. There is the old adage that a runner never regrets going out for a run and doing so with some friends, three of whom are real asses, (Rosco/Mordy/Cash) amplifies that by 1,000 percent.

So even if there is just that one compassionate and joyful moment, the world is perhaps just a little better place. Who knew an odd, often miss understood, and sometime maligned, pointy large eared donkey could affect such change (perhaps that's rhetorical).

We hope that folks come on out and run with us. We keep an eye on each other and our trail runs are “leave no @ss behind” events where we meet at every intersection and the top of hills. We love to be social and have adopted fellow Rosco’s Runner May Hui’s motto: “If there is no selfie, it didn’t happen.” We communicate primarily via a closed Facebook group, but if you’re not on Facebook, no problem, we can accommodate you via e-mail. We meet at Rosco’s on Saturday and different trailheads on Sunday, runs start promptly at 7 a.m. in warm months, 8 a.m. in cold months. One exception is on the first day of the month we meet at 7:15 for the Neilson’s Challenge, as our group has many folks on different Brewer’s Cup Teams.  We warm up together with an easy run to the park, then it’s good-hearted competition time followed by a cool down back to the coffee house.