By Monica Smith
PikesPeakSports.us
Despite a cool 20 degrees and some icy conditions, the 35th annual Rescue Run 5K/10K drew a record 866 runners who raced into the new year Tuesday in Palmer Park. 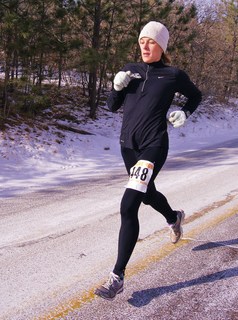 “Last year I lost by less than half of a second - so I wanted to win, but I was hoping the time would be faster.” said Simkins.

A distance runner at Western State College (he also ran at The Classical Academy in Colorado Springs) said the race was a tune-up for his indoor season to come.

“(The Rescue Run) was kind of just for fun,” he said. “Also, going into indoor track it’s nice to just put a race in there and just kind of mix the training up as I build a base for indoor.”

Gutierrez, 46, of Colorado Springs, clocked 17:29 and set a new age-group record. He broke the previous mark by nearly two minutes.

Amanda Ewing, who competes for Colorado Running Company, was the first of the women to finish the 5K. Ewing, 31, of Colorado Springs, crossed the line in 22:02.

“I was just trying to stay focused and stay relaxed with it being cold and not feeling that in shape (from taking December easy),” said Ewing. “It was tough, but I tried to just get to the top (of the climb) and then just cruise on the way back down.”

Nancy Hobbs, 52 of Colorado Springs, placed second for the women in 23:34.

Just 13 minutes later, Scott Spillman was first to cross the finish line in the 10K race. Spillman, 26, of Colorado Springs, finished in 36:06, his third-best time in a 10K. “I thought coming into the race, that I had a decent chance to win depending on who showed up,” said Spillman. “I took it out kind of fast and knew that Simon Gutierrez and a couple other fast guys were doing the 5K, so I just stayed a few seconds behind them and then they all peeled off.

“I was basically just running alone most of the race trying to keep a good pace,” he said.
Spillman said this was his first time competing in the race, as well as his first time at Palmer Park.

Spillman is recovering from two fractured ribs sustained in an auto accident in early November. He said he used the Rescue Run as a trial to see where his fitness level was coming off of his injury. He is trainig for the Boston Marathon in April.

“I love this race,” said Walter. “I love (EPCSAR), and I love what Pikes Peak Road Runners do. It’s just so great to get on the trails and it’s a great way to start the year.”