Randall breaks the golden rule and wins; Erholtz holds off a challenger in Pikes Peak Ascent 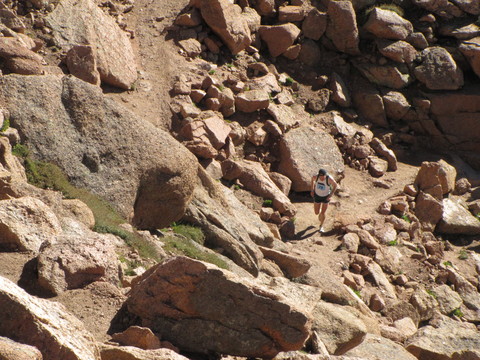 Photo: Glenn Randall, 23, of Mesa, Colo., powers up the final switchbacks in

Glenn Randall bolted away from the starting line of the 2010 Pikes Peak Ascent, cracking the golden rule of the race: Don’t go out too fast.

His early pace Saturday morning was something better suited for a 5k, rather than a 13.2-mile run to the top of 14,115-foot Pikes Peak.

The other top runners in the field couldn’t believe their eyes.

“I thought it (Randall’s pace) was a joke, to be honest,” said Rickey Gates, who eventually finished third. “For him to do that, it was humbling for the entire field. I don’t think a single person who placed in the Top 10 expected him to be out there … insane.”

Yeah, crazy like a fox. His plan worked perfectly, and 2 hours, 9 minutes and 28 seconds later, the guy who started too fast was the Pikes Peak Ascent Champion.

Randall, a powerful professional cross country skier from Mesa, Colo., said he used that strength to open an early lead. No other runner in the race could catch him.

“I am pretty good on flats,” Randall said. “If people were going with me, hopefully it was going to take a toll on them. I feel like I should be in pain, but I am not.” 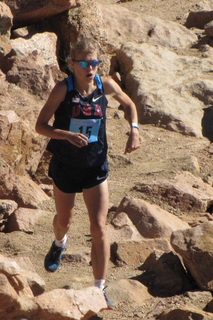 Standing on top of “America’s Mountain” and accepting congratulations from people who had never heard his name before, Randall, 23, said he came to Pikes Peak to train
for skiing.

“( The Ascent is a) good test of fitness and a good way to get a good race in. You’ve got to run with confidence.”

In the women’s race, Brandy Erholtz held off Kim Dobson to take the women’s title in 2:41:38.

“I didn’t know how close she (Dobson) was until the last mile and then I was like, ‘Oh crap,’” Erholtz said. “I knew at that time I didn’t have the leg speed and those (Sixteen Golden) Stairs are tough.”

Erholtz will run as member of the U.S. Mountain Running Team at the World Championships next month.

“I have this race and world’s left in my season,” Erholtz said. “I decided I was going to go for it from the gun. I wanted to be competitive and win if I could.”

Dobson, 26, of Aurora, won on Mount Evans earlier this summer, setting a new record. She is relatively new to mountain running, but ran like a veteran, striding to the

finish line in an attempt to catch Erholtz.

But Pikes Peak’s elevation took it’s toll on her as well.

“I know I get stronger the higher on the mountain I go, but those last two miles are tough,” she said. “I was trying not to fall over.”

Marc Luentstein of Switzerland (2:12:19) finished second in the men’s race, followed by Gates, (Aspen, 2:16:44), Ryan Hafer (Colorado Springs, 2:20:04), Alex Nichols (Colorado Springs, 2:20:57), who captured the top spot in the Triple Crown of Running with his combined time in the Garden of the Gods 10 Mile Run, the Summer Roundup Trail Run and the Ascent..