Pikes Peak Run Fest: It's going to be a party and you're invited! 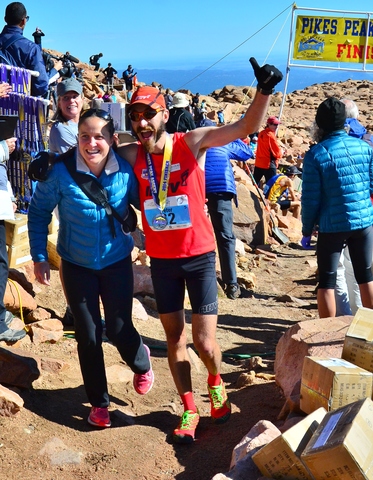 Sixty years ago body builder Monte Wolford won the inaugural Pikes Peak Marathon. Since then, the people of this great race, Arlene Piper, Matt Carpenter, Kim Dobson and many others have written the region’s running history. And the mountain itself, the 14,115-foot matron of Colorado’s Front Range, has provided the story line in a community that has embraced running as part of its unique culture.

On Aug. 13 Colorado Springs will celebrate the region’s running legacy – all of the athletes, race organizers and its various events - at the inaugural Pikes Peak Run Fest. The celebration will begin at 5 p.m. at Alamo Square Park, 215 S. Tejon. Everyone is invited.

(Businesses and organizations interested in participating are asked to e-mail pprunfest@gmail.com.)

Plans call for live music with the bluegrass group Grass it Up, and the Austin Young Band, plus a selection of local craft beers, food vendors and exhibits by running organizations, companies and stores. Runners who want to shake out a few miles are invited to lace up and join us for a social run.

There’ll also be a bounce house and llamas for the kids.

“We really want to include everyone who loves running and feels a connection to running in the Pikes Peak Region,” Ilgen said.

Excitement for the 60th Pikes Peak Ascent and Marathon and the Run Fest is building throughout the community.

“I really like that the Pikes Peak Marathon organization has added another celebration that acknowledges that it’s bigger than just one town,” she said. “It’s a regional event that deserves respect for its tradition and its difficulty.”

Gaebler said The Pikes Peak Ascent and Marathon help give the region its identity as an active and healthful place to live.

“The Pikes Peak races have a long-standing tradition that draws thousands of people from around the country to compete in one of most challenging races on one of the most beautiful mountains in the world. I return to this race because it feels like home on that mountain on race day. There is no place I’d rather be than with my fellow runners as we together see if the mountain will allow us to make it to the top.”

“The Pikes Peak Ascent and Marathon are cornerstone races for our community,” she said. “The Run Fest should be a wonderful celebration of our history and Pikes Peak Road Runners is excited to be a part of it.”

Karole Campbell, Pikes Peak Marathon Marketing Manager, said the region “has a rich history of running and sports fitness and the Pikes Peak Ascent and Marathon are the foundations of much of that regional focus. Pikes Peak Run Fest is a celebration of the “granddaddy” that launched the sport of running in our region and continues to impact our community in terms of tourism, economic development and the sports economy.”