Michael Wardian makes history with a different kind of "double" 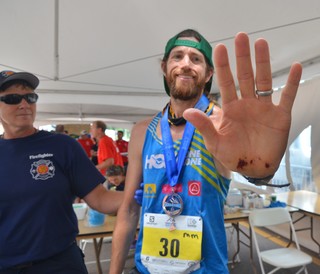 Other runners may have wondered why Michael Wardian stopped for water and fuel so early in Sunday’s Pikes Peak Marathon. They had completed only 1.5 miles in the long race to the summit of Pikes Peak and back.

“At the first aid station, I was the only one getting water and food,” Wardian said. “I got Gatorade or water and food at every one on the way up.”

It was amazing that Wardian was in the race. While most of the 800 or so in the marathon spent Saturday resting up for their tour of America’s Mountain, the 43-year-old Wardian warmed up in a way that is almost beyond belief.

Still, he felt better than he did during most of Saturday’s Leadville 100.

“I had so many stomach issues in Leadville,” he said. “I had diarrhea 14 times during the race.”

He finished those 100 miles nearly 20 minutes past midnight and drove to Manitou Springs, arriving a little after 4:30 a.m.

“I can tell you the only thing open at that hour is the Loaf ’N Jug,” he said. “They don’t have a lot of vegetarian options. I ate a few salt and pepper cashews but I couldn’t sleep.”

Wardian, of Arlington, Va., arrived in the mountains of Colorado on Thursday, giving him little time to adjust to the lighter air.

“I am stoked,” he said just minutes after completing the 26-mile roundtrip of Pikes Peak, which includes an elevation gain of 7,815 feet. “But I would love some food and some sleep.”

Why attempt this stellar feat that taxes the body in unimaginable ways?

“I wanted to break Marshall Ulrich’s record,” Wardian said. “I heard about it a long time ago.”

“I crushed it,” he said of besting Ulrich’s record time.

“That’s one of the hardest doubles ever,” said Peter Maksimow, 35, a Manitou Springs runner who was texting with Wardian when he hit town in the early morning hours Sunday, less than three hours before the marathon start time of 7 a.m. “What he did is pretty amazing.”

Wardian works as an international ship broker in Arlington, Va.

“If you saw the Tom Hanks movie ‘Captain Phillips,’ that was a ship like we help load,” he said.

Wardian and his wife, Jennifer, have two sons, Pierce, 11, and Grant, 8. They’ve been all over the world with him as he runs internationally.

In fact, Wardian was one of 33 runners who competed in the 2017 World Marathon Challenge, which involves seven marathons on seven continents in seven days; 31 completed the task. He had the best average time of 2 hours, 45 minutes, 42 seconds.

Wardian said he’s run 35 races this year, including the San Diego 100 and a half-marathon the next day.

“Leadville and Pikes Peak are the most difficult double I’ve done,” he said. “This was tough.”