Mark Seelye was cold, wet and couldn’t stop shivering. He huddled with others in the Summit House atop Pikes Peak but five hours of exposure to rain and cold left him dreaming of a hot bath and the comforts of home.

“I was shivering for two hours,” he said. “I just couldn’t stop.”

The man who has completed a record 35 consecutive Pikes Peak Ascent races was remembering the 2008 event, when he fought America’s Mountain for an entire morning, straining to complete the Ascent even though the weather had taken a turn for the worse.

“That year was horrible,” said Seelye, a longtime Manitou Springs resident. “It rained at the start of the race and all the way to the timberline. When we got out of the trees, the wind was blowing. We had 40 mile per hour wind and ice pelts.”

“We had 6-to-8 inches of slush on the way up,” Morrey said. “It was dangerously cold as you got nearer the summit. You’d see people sitting on rocks; I couldn’t stop to help them. I had to save my own ass! I beat the cutoff time to get past Barr Camp and A-Frame, so I made it to the top.

“I’ll never forget that year, though. The mountain can be tricky.”

The 67-year-old Seelye hopes for better weather this year as he toes the starting line for his 36th Ascent. As usual, he’ll have family at the start to cheer him on.

“My grandson (Grayson, 8) sent me a Father’s Day card this year that said, ‘Keep Going Opa,’ which is German for grandpa,” he said. “My family encourages me to keep going, so it’s year to year.” 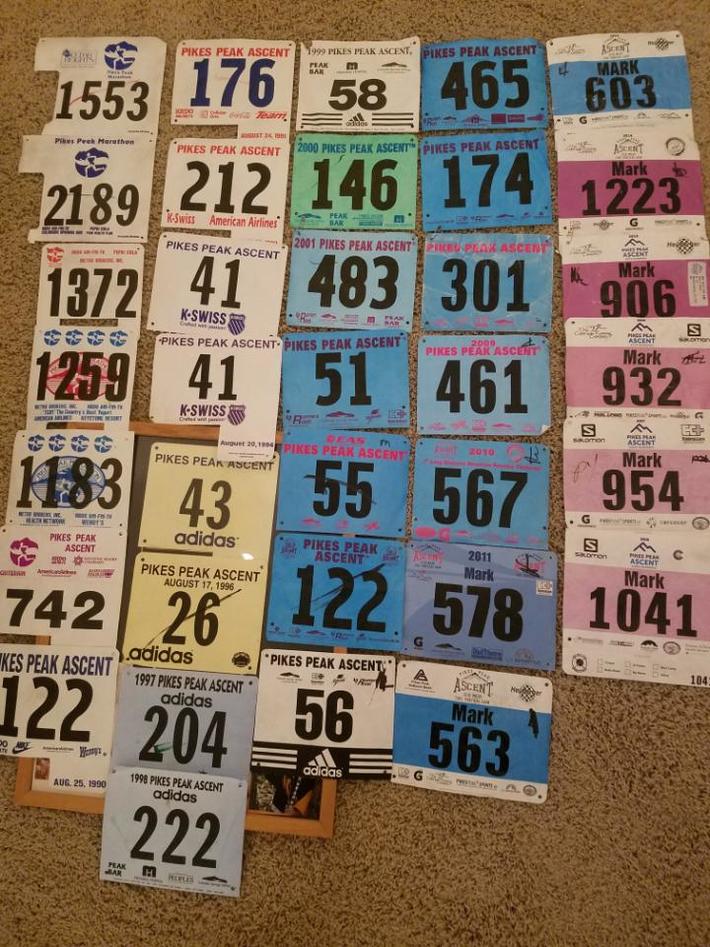 The unparalleled streak has brought him satisfaction but can also be a burden.

“The mind is willing but the flesh is weak,” he said. “Five hours on your feet, pushing, is a long time. I don’t even train for five hours, so it’s shocking to your body on race day.”

What’s shocking to many is that Seelye has completed 35 consecutive Ascents. It’s a record not likely to be eclipsed.

“I don’t think anyone will ever match it,” said Morrey, who has completed eight Ascents over the last 24 years.

“To do (35) in a row, you have to live locally and have a flexible schedule so you can train for it,” Morrey said.

Despite the large, talented and enthusiastic running community around the Springs, Morrey doesn’t think anyone will approach Seelye’s mark.

He predicts that Seelye will stretch his streak “another 10 years.”

“He has a better attitude about it now. I know he really enjoys trail running. He likes the solitude and tranquility of trail running.”

Seelye is still “sort of negative” about race day, he said.

“But I do like training, running trails and mountains,” he said. “It’s hard on race day now because I used to run with the front pack for several years. Now I’m back among the masses and getting jostled with everybody else.”

He finished first in the Masters division in 1995 and was second the following two years.

Seelye’s health is good, so he figures he’ll add to the streak in coming years, but he remains noncommittal.
Seelye, a 1970 graduate of Fountain Valley School, has worked as an insurance broker for 32 years. He was captain of the track team at FVS while competing in the 400, 800 and long jump.

“There was a guy who ran the two-mile and I thought that was such a long race,” Seelye said.

More than a decade later, he entered the Ascent and found himself challenging the rugged terrain of Pikes Peak for several hours. He was smitten by the exhilaration of race day and the feeling of accomplishment. His first three Ascents came while living and training in the brutal heat and humidity of Houston. He then moved back to the Colorado Springs area and has been signing up for the Ascent ever since.

“I was definitely addicted. I was hooked on the race in the beginning,” he said. “When I’d get my race packet, I’d just fill out the entry form for the next year and hand it to them. I really looked forward to it and couldn’t wait for the next one.”

This year, he signed up for the race on New Year’s Day, as soon as registration opened.

His son, Trevor, who lives in Houston, ran the Ascent two years ago and his daughter, Jocelyn, did the race in 2005 when lightning and rough weather forced many race officials to turn back many of runners who weren’t among the early finishers. The road to the summit was also closed and Seelye said he was “crammed into the Summit House with 700 other runners until the highway was opened seven hours later.” Seelye trained a little more this year and said his body feels better as he isn’t playing as much hockey as he did the last several summers.

“I haven’t had any significant injuries, so I figure I should keep the streak going,” he said.

He still remembers finishing the Ascent that first time in about 3 hours, 25 minutes.

“I remember tearing up at the top,” he said, unashamed at the emotion he felt that day. “Looking around and seeing that view from the top was really something.

The streak was threatened in years past, he said, “by a couple of touch-and-go injuries” and a couple of illnesses as race day approached, but he was always able to find the strength and will power to finish the race.

Seelye has the wardrobe to prove he’s a winner.

“I have a closet of 35 finisher shirts gathering dust,” he said with a chuckle.

Soon, he should add No. 36 to that collection. And the streak will live for another year.