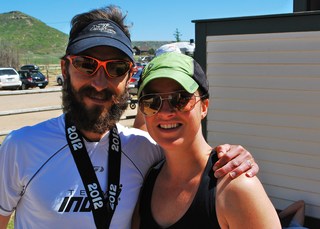 His face was crusted with dust and sweat. He'd been beaten by the wind and sun. His cool runner's beard resembled a tumbleweed. Beneath it all, Pete Maksimow wore a smile.

When he crossed the finish line at Saturday's Greenland Trail 50K, Maksimow shed some doubts and gained a course record.

"I was really working it on that last lap," Maksimow said. "I was trying to get my legs moving."

"I've thought about it ever since then," Maksimow said. "It was a good time. Justin's record was solid."

Maksimow, who races for INOV-8 and the Colorado Running Company, isn't exactly known for running ultra events. But in Colorado, he's tough company in middle distance trail races. His big goal for the year is to qualify for the U.S. Mountain Running Team and compete in the World championships. A year ago, he barely missed that goal.
With 22 miles behind him - and nine to go - on the rolling hills of Greenland Open Space, he beared down and fought for every second.

"I was just trying to work the downhills," he said. "It was a matter of pacing. I was trying for a 50-minute lap (on laps of about 7.5 miles). It's long and I don't like feeling as if my body won't move. It kind of became a slog." 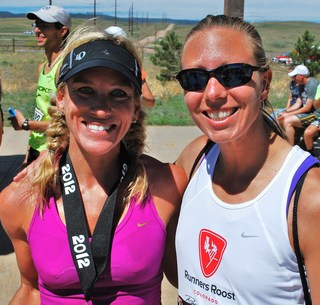 It was a big day for records, despite warm temperatures.

Where did Bruxvoort get that speed? A stay-at-home mom, she puts in 30 miles on Saturdays and then does repeats on the steep hills in Boulder on Sundays. And she was motivated by a gorgeous race course.

Bruxvoort's record time came as a surprise to some Greenland veterans. Derek Griffiths, race director and editor and publisher of Colorado Runner Magazine, was a little bit shocked.

"I didn't think a woman could run under four hours on this course," he said.

Other top placers from Colorado Springs