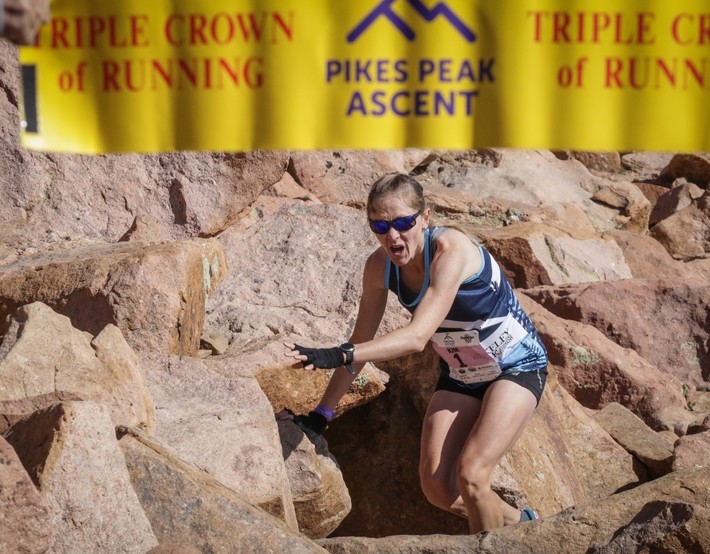 By Jill Rothenberg, for PikesPeakSports.us

Longtime Pikes Peak powerhouse Kim Dobson, 35, of Eagle, beat the wind, all of the women and most of the men to capture her seventh Pikes Peak Ascent title on Saturday.

“As usual, it was a great, hard race,” said Dobson. “I felt really good about
my training coming into it. Though I felt a little tired at Barr Camp, it felt good to get to
higher altitude and to run with fast runners—some who I passed and some who passed
me.”

Dobson finished in 2 hours, 41 minutes, 42 seconds, and placed 13th among all the runners in the race. Dobson, who in 2012 set the women's race record - a blazing 2:24:58 - said she didn’t pay a lot of attention to her watch. Instead, she focused on doing her best, including fighting gusty winds that buffed the last three miles of the course that crosses Pikes Peak's broad eastern face.

Not only is Dobson the fastest woman, she is also one of its most welcoming to other runners.
One of those is second-place Ascent finisher Ashley Brasovan, who tagged the summit in 2:24:08.

Brasovan came to Pikes Peak with some trail-running credentials, having won the 12.6-mile Barr
Trail Mountain Race in July.

“Kim is a beast at altitude, so coming in second to her,” she said as she posed for photos with Dobson. "I’m just so glad for this first-time experience. Now that I have this under my belt, I’m really looking forward to coming back and beating my time.”

Five hundred ninety-one women completed this year’s Ascent, including some of the peak’s most enduring female runners. Sharon Greenbaum, 56, of Colorado Springs, has tangled with Pikes Peak since her days at Air Academy High School. Charlene Aldridge, 71, has been racing for over 30 years.

There is a long history of mothers and daughters running the Peak together. This year, longtime local runners Susan Cogswell, 70, and daughter Meghan, 40, completed the Ascent, with Meghan planning to also run in Sunday's marathon.

“Meghan inspires me to keep running,” said Susan of both Pikes Peak and her twenty-year streak at Imogene Pass.

Another mother-daughter team is runner Renee Ruff of Castle Rock, whom doctors
didn’t think would run again after injuries sustained from a compression fracture.

“It made me feel like I’m going to go 100 percent, and that includes up this mountain,” she said at the summit. Her mother, Denise, also finished the Ascent. “We’re doing Imogene Pass in two weeks, “ Ruff said. “So this race is a great lead-up to that.”

Newcomer to Pikes Peak, Lauren Puretz, 35, of Colorado Springs, had one of the Ascent’s most dramatic—and fast—uphill trips. She placed 8th overall among women, with a time of 3:13:45. “My goal was not to kill myself on the Ws,” she said of her race strategy. "By the time I got to No-Name Creek, I was wondering why I was doing this.”

But Puretz said she picked up speed and felt better as she surged up the mountain.

“Even though it was windy and cold right after the A-Frame, I really enjoyed the last three miles. If you had
asked me at No-Name if I was going to do this again, I would have said no. But now, I want to come back and do the marathon.”