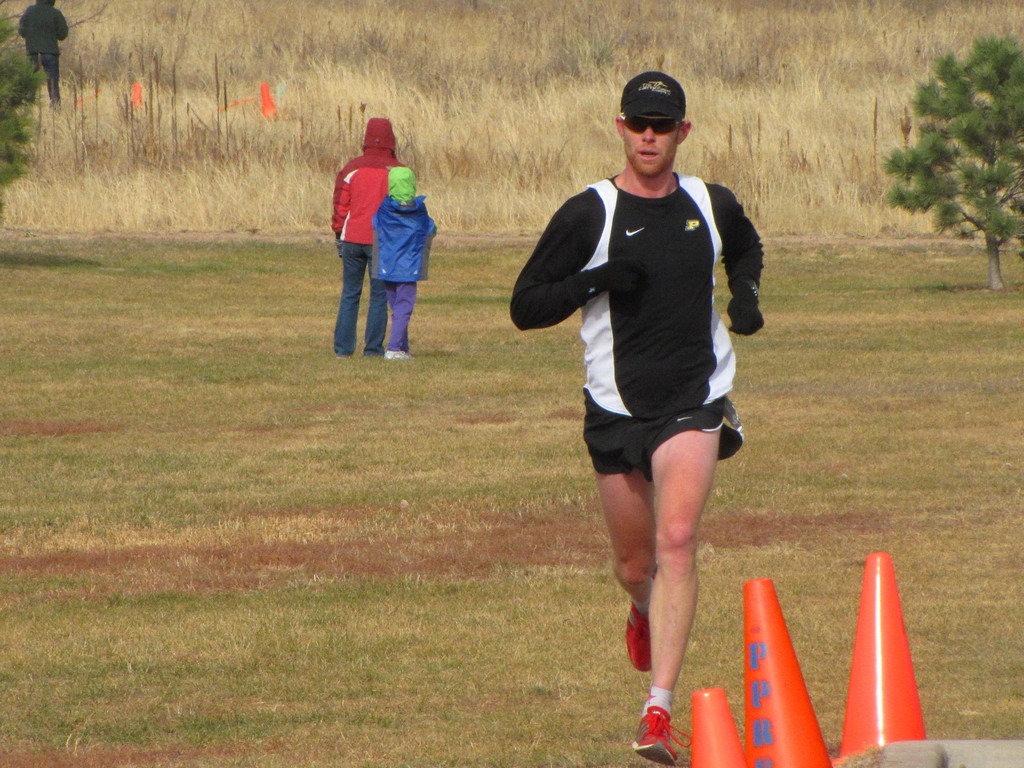 PHOTO: Logan Wealing of Colorado Springs won all four Fall Series races to capture the overall series title. He posted a winning time of 41 minutes, 55 seconds in the series finale on Sunday at Palmer Park. The course covered about 6.5 miles on twisting and sometimes technical singletrack.

Rochelle Persson was kicking herself a little at the end of the Pikes Peak Road Runners Fall Series No. 4 race Sunday at Palmer Park.
She had just placed second in the women's race, her third second-place finish in the series. Persson, a 43-year-old physical therapist from Colorado Springs, is competitive, but she should be proud.
For the second-consecutive year, Persson is the Pikes Peak Road Runners Fall Series champion. She knocked off the (approximately) 6.5-mile singletrack course in 54 minutes, 17 seconds, striding to the finish line with a light, but strong stride.
Connilee Walter won it in 53:38.
Persson gave it all she had. She had set a goal to defend her Fall Series title from a year ago, then made it happen.
"I couldn't have gone any harder today," she said at Palmer Park finish.
And she is running with fast company. Two of the runners who beat her this year, Amanda Ewing and Connilee Walter, are Colorado Running Company-sponsored and are among the best women runners in Colorado Springs.
Persson's total time over the four-race series was 2:41:29. She clocked 27:04 at the Monument Valley Park 3.5-mile (the course that ran up the middle of Monument Creek for about 1/4 mile), then ran 35:37 over four hilly miles at Bear Creek Park (including the famous rope climb). Two weeks ago, she was 44:31 at Ute Valley Park (six miles).
So what's the goal in 2011. Marathon. She has finished five marathons, including two at Boston, and wants to do another.
"That's my plan, but I don't know where I'll run."
Nicole Rosa, 50, of Colorado Springs, was second overall among the women with a total time of 2:55:08. Regina Hammond-Gardner, 36, of Colorado Springs was third in 2:56:18.
In the men's race, Logan Wealing (29, Colorado Springs) won three of four Fall Series races. He won on Sunday in 41:55 and finished the series in 2:06:17. Peter Maksimow (31, Manitou) was second in 2:10:47, followed by Doug Ryden (35, Colorado Springs) in 2:11:40.
"It's a great feeling," Wealing said about winning the series. "I've done the winter series before and a few fall series races, but I've never won, so it's a good win today."
He said the lead group started fast.
"It was a hot pace from the start," he said. "We got a little road action (the race start included a short piece of asphalt) and everybody was pretty grouped up. And then we got on the trail and things started to separate and I kind of pulled ahead."
Wealing dominated the series from the get-go. He was second at Monument Valley Park in 20:57, then followed with wins at Bear Creek (28:41) Park and went Ute Valley Park (34:44).
Ryden was second on Sunday with a time of 42:54, followed by Maksimow in 43:31.
Wealing, an engineer at SRAM, a local company that makes high-end bicycle components, is the defending Colorado State Snowshoe Champion. He is using the Fall Series to prepare for the physical demands of snowshoe racing. And he plans to run in the Pikes Peak Road Runners Winter Series.
"It's good off-season training and great for snowshoe racing, too, because they're (Winter Series races) tough as well."