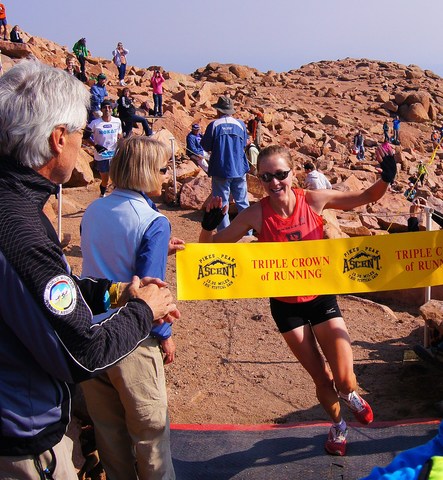 With a perfect training regimen and ideal race conditions, Kim Dobson stormed to a new women's record in the Pikes Peak Ascent in 2012, covering the famous 13.32-mle course in 2 hours, 24 minutes, 58 seconds.

Video of her record finish on the summit of Pikes Peak.

Dobson had spent that summer running to the top of Colorado's highest mountains, and she threw in some half-mile repeats at altitude to boot. "I’d always try to up the intensity and add one more interval,” Dobson said after the race. “I remember having to fall down a couple of times."

Read more about her record run.

With three wins in five starts, Dobson has dominated the Pikes Peak Ascent like no other runner in recent memory. She first competed in the Ascent in 2009, when she entered "just for fun" and placed second.

After taking a year off to start a family with her husband, Corey - their baby son Bryce was born on July 1, 2014 - Dobson, 31, is coming home to the race that started her mountain running career. And she's going to make a splash. She'll toe the line at 7 a.m., Aug. 15 for the start of the 2015 Pikes Peak Ascent, and she plans to run the Marathon on Sunday!  Dobson isn't predicting any new records, but her recent results - wins at the Black Canyon Ascent, the Mount Washington Road Race, and the Vertical K in Aspen - indicate a fast finish times.

We tracked her down and she kindly answered a few questions.

Your record run in the Pikes Peak Ascent is truly an historic moment. What memories about that experience stand out for you? Among the many happy memories I have from 2012, two in particular stand out.  The first memory I have of the race is when I glanced down at my watch when I arrived at Barr Camp.  It read 1:12!!  I vividly remember the excitement I felt at having run so fast for the first half of the race, immediately followed by fear of a huge bonk from going out too hard.  It took some prayers and pep talks with myself to believe that I could maintain that pace to the summit.

The second memory I have is when I caught up to the legendary Simon Gutierrez with about one mile to go.  Shortly after he let me pass, my heart rate soared and I had to slow down.  I told him to pass me back but he insisted on letting me go first.  What a gentleman!  Running the last mile with such a nice person and a dear friend was a neat experience.

You've made the brave decision to run the double, how did that come about, and what are you expecting in the round trip? I think I have gone crazy signing up for the double!  Doubling has been on my bucket list for awhile now, but I didn't expect to do it for a few more years.  A couple of days ago, my husband and I started discussing doubling this year.  I'm healthy and not pregnant this year, so why not!?  Although my training has been geared towards the Ascent, I decided I want to take advantage of this opportunity while I can.  I hope to experience a great adventure, take on a new challenge, and have fun. Two days on the Peak is twice the fun, right?

Your training that year was pointed at a fast Pikes Peak time, what has your prep been like this summer? My training this summer has actually been fairly similar to 2012.  I have been running about 60 to 70 miles per week, with a focus on high altitude and elevation gain.  I try to fit in three quality workouts a week, usually in the form of an uphill tempo, long run, or a race.  It sounds like torture, but I love the long, grueling climbs without oxygen!  I have also run on the Peak a few times this summer which was really fun (and hard!).   The main difference between this summer and 2012 is that 2012 was preceded by two years of uninterrupted, quality training.   This summer was preceded by having a baby and an injury.  I certainly can’t complain though as my fitness has come back much quicker than I ever expected.  I am really just grateful to be running again.  To be able to compete is an added blessing.

Straight up, do you think you can run that fast again, if not this year, perhaps sometime in the future? Great question! Honestly, I am not expecting a new PR.  I’m still a bit stunned by my 2:24:58 ascent.  My training, race day execution, and the conditions that day in 2012 went so well that it is hard to imagine all of the necessary factors lining up so perfectly again.  My goals for the Ascent have also changed.  In 2012, I was consumed by running as fast as I could up Pikes Peak.  I feel that I got the best out of myself and I am content with my PR mission.  Now my race day goal is to compete rather than to set a PR and really just enjoy the Peak.  Pikes Peak will always be one of my favorite races, but I may not be able to prepare to the same extent as 2012 as I run other races and continue to expand our family in the future.  Although I don’t expect to run sub 2:25 again, we should never put limits on ourselves so who knows what the future may bring!

You seem to be back on track with wins at the Black Canyon Ascent, Mt. Washington, the Vertical K in Aspen. Do you have a goal time for Pikes Peak this year? And if so what would you like to do? Well, I predicted a 2:32 so let’s hope I can run that!  If I have a good day on race day, my training indicates that I should be somewhere between my 2012 time (2:24:58) and my 2011 time (2:34:07).  Unless I grow a second pair of lungs in the next two weeks, I don’t expect to run sub 2:25 again so I’m hoping for a second-best time there!  It would be really neat to run under 2:30 this year, but some of that will be determined by factors outside of my control such as the weather, trail conditions, competition, etc.  All that being said, however, my main goals are to stay positive, push myself to the limit, race smart, and have fun.  I’m excited to see how it all plays out this year!

Since your last run at Pikes Peak, you and Corey have added a new member of the family, son Bryce. What was it like - mentally, physically, emotionally etc - returning to training after Bryce arrived? I must admit, having a baby took a greater physical toll on my body than I had anticipated prior to getting pregnant.  Growing and delivering a baby is a miraculous, joyful, and challenging process. I ran until about 17 weeks into my pregnancy at which time I developed sudden, intense pubic symphysis pain. Although I was disappointed to stop running earlier than I had expected, I knew that continuing to run through the pain could create lasting damage.  Looking back, I’m thankful I had the knowledge and advice from wise friends to take a break when I did.  Had I continued to push through the pain I know it would have taken much longer to feel normal again.  Getting back into running after 7 months off was a bumpy ride full of niggles.  My first run back was only two miles but it left me sore for days!  My body felt mostly back to normal and ready to train hard at the beginning of March, about 8 months after Bryce was born.

Mentally and emotionally, it has been a slow and steady process of getting my confidence back, trusting my body again, and learning how to push 100 percent.  I love to push hard, say 95 percent effort, but getting that last painful 5 percent out of myself again has taken some practice.  The addition of our sweet Bryce obviously requires more logistical planning.  I am fortunate to have such helpful and supportive parents, in-laws, and a husband who care for Bryce when I train and race.  I owe a huge thank you to them!  Bryce has added so much joy and meaning to life which has helped me not take running too seriously.  It’s all about having fun, doing my best, and pushing hard while I can.

Trail and mountain running is exploding in popularity, and lots of runners are looking for advice. Can you tell us what a typical training week looks like as you prepare for Pikes Peak? My typical training for the Ascent focuses on elevation gain and high altitude.  While every week looks a bit different, here’s an example of what I did during a peak training week (no pun intended!) in July:

Monday: mountain bike
Tuesday: 1.5 hour run on trails, moderate effort, minimal elevation gain
Wednesday: 14 mile run total, including 5.6 miles of hard effort tempo running up the service road on Keystone Mountain
Thursday: Run up Grays and Torreys from the I-70 exit, 14 miles
Friday: 1 hour run, easy effort and flat
Saturday: Run up Pikes Peak from the start line to the finish, pushed the pace the second half.
Sunday: 1 hour easy run with 5x30 second strides This was a big week for me. If I can complete four or so weeks similar to this during the summer, I feel very prepared for the Ascent.

You've said your first attempt at Pikes Peak (2009) was "just for fun" and you finished second. Within three years you had become the U.S. Mountain Running Champion. With that in mind, what does Pikes Peak mean to you? Pikes Peak is a mountain of memories to me.  It reminds me of Corey and our quest as newlyweds to climb all of Colorado’s 14ers. (Sidenote: I am still about five short from finishing due to being a wimp).  It reminds me of all of the wonderful people (and the bear!) I have met throughout my years of preparing for and running on the Peak.  It is also the race that first helped me to believe in myself and in my ability to compete in mountain running.  I’m so grateful that Corey and I decided to run the Pikes Ascent on a whim in 2009, “just for fun”.  I hope to compete and participate in the Pikes weekend for decades to come.