Kilian Jornet runs away with marathon title, but record eludes him One after another, admiring fans approached Kilian Jornet as he stood on the sidewalk of Manitou Avenue. The 31-year-old Spaniard is perhaps the world’s foremost trail runner and he’d added to that sparkling reputation by winning the Pikes Peak Marathon earlier Sunday morning, his third victory in the five races of the Golden Trail World Series.

Now, as bright sunshine enveloped the big crowd near the finish line of the Marathon, Jornet exited the drug testing area housed in The Loop, a popular restaurant. It didn’t take but a few seconds for racing fans to recognize the newly crowned champion.

People of various ages asked to have their photos taken with Jornet. They asked him to sign autographs. One young fan, who was born shortly after Jornet won the 2012 Pikes Peak Marathon in his only previous appearance, presented him with a boxed gift, a vegan apple pie. 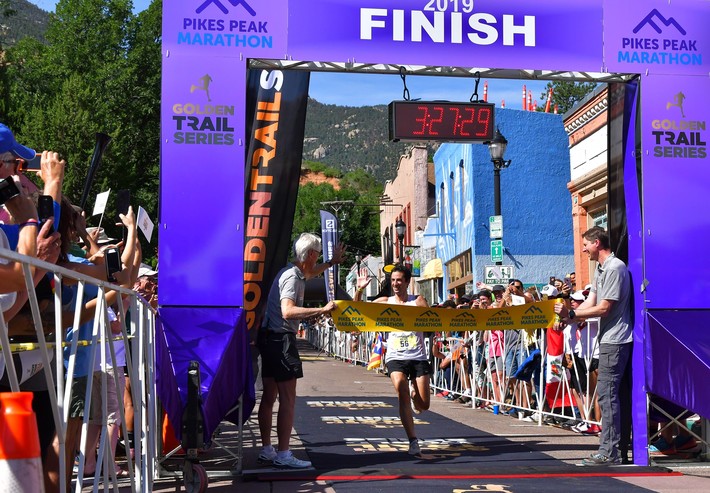 “That’s unique,” Jornet said. “I’ll enjoy it and it will give me back some energy.”

The accommodating champion was gracious and appreciative as fans approached him, just as he’d been while applauding the second- and third-place runners who finished the race up and down America’s Mountain, although they crossed the finish line several minutes after Jornet had the winner’s medallion draped around his neck.

None of the other talented runners were able to challenge Jornet, however. He pulled away by the two-mile mark and forged on alone for the final 24 miles while finishing in 3:27:28.

“It’s a super difficult race, but the conditions were nearly perfect,” Jornet said. “It was a little windy (on the summit) and a little hot on the way down.”

He was spurred on by his desire for greatness and the thought of eclipsing Matt Carpenter’s record time established in 1993. Alas, the record was not destined to fall on this day, and Jornet knew it before the race even began. Carpenter’s mark of 3:16:39 has stood the test of time, and it’s part of the lure that brings elite runners like Jornet to Manitou Springs to match their ability against history and the legacy of America’s Mountain.

“There is such history here,” said Jornet, who chose this race for his only appearance this year in the United States. “(The record) is something unique that (Carpenter) did here. I knew how hard the record was (to beat).”

Jornet said he’d didn’t specifically target the record, although it was a secondary goal if all things lined up just right.

“It’s hard to focus on records when you’re running because conditions might not be right and then you’ll be disappointed,” he said. “The conditions were nearly perfect today but my legs were not. Carpenter’s record might be a once in a 100 years kind of thing.”

Sinclair, who finished fifth in his only appearances in the Marathon, figures the record won’t last forever.

“I’m sure somebody can do it,” he said, “but it’ll take all the stars to align. It would take someone dedicated to it like Matt who trains on the mountain. It’s really a unique course; probably nowhere else in the world where you have a sustained 13-mile climb.”

Canaday said that Jornet pulled away at about the Incline.

“He was gone. A couple of guys tried to go with him but he was pretty much by himself,” Canaday said. “When he was coming down the mountain, I had a quarter-mile left to reach the summit. He’s a really good uphill runner but exceptional downhill, so I knew I couldn’t catch him.”

Jornet had fond memories of winning the Pikes Peak Marathon back in 2012, especially since his wife—then his girlfried, Emelie Forsberg—won the women’s race.

This was Jornet’s third win in the Golden Trail World Series, and he’s already qualified for the final event in Nepal, which features the series’ top 10 qualifiers.