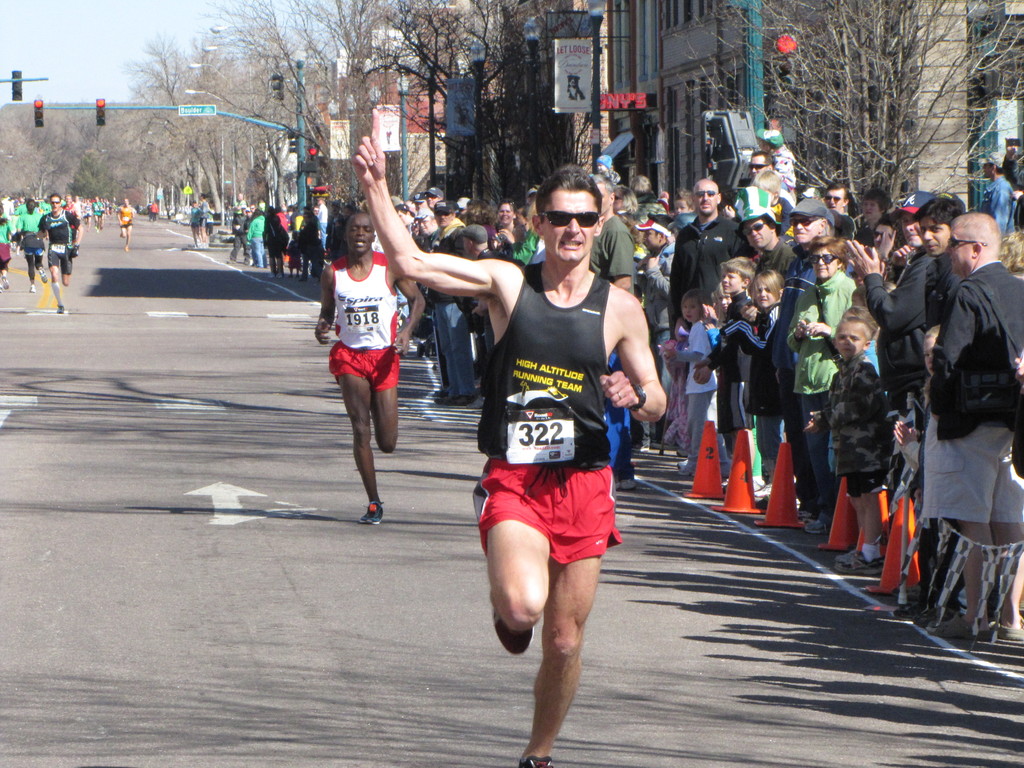 Justin Chaston was indeed No. 1 in the 5K on St. Patrick's Day race in March. The 42-year-old native of Great Britain won with a time of 15:07. He recently set a new record in the Nielson Challenge 2-mile at Monument Valley Park.


Justin Chaston has competed in races around the world. He felt the thrill of winning the 3,000-meter steeple chase at the British Olympic Trials in 1996. He competed three times (1996, 2000 and 2004) in the Olympic games. And at age 42, when most elite runners have long since given up the idea of running fast, Chaston is burning up area races. He has four wins in four starts this year. But his best effort came last Saturday (May 7) when he set the record in the Pikes Peak Road Runners' 2-mile Nielson Challenge. Chaston charged over the flat course at Monument Valley Park in 9:35.59, breaking the old standard of 9:48 (Adam Rich, 2009). "I am learning that as long as the body can handle the work, age is not as limiting a factor as we seem to think it is," he said. Chaston and his wife, Stacey, have two children, Thomas, 11, and Emily, 10. The family lives in Colorado Springs. He took the time to answer a few questions for us.

You just buried the Nielson Challenge 2-mile record, what attracted you to shoot for that mark?
The Nielsen Challenge is a great way to measure your fitness.  It's been run on the first Saturday of every month since 2000 so it's easy to gauge your progress again previous performances as well as those of others.

I've been in pretty good condition lately so I decided to run the April race which resulted in a time of 9:49, missing Adam's record by one second.  That lit the fire.  I knew I couldn't do the June race because I'll be racing in Tennessee, so May was going to be time to do it.

I was pretty pleased with my 9:35 and, at 42, don't expect to be breaking that record again.

The Nielsen Challenge is also a pretty special event.  The guys that organize it are totally in it for the love of the sport.  They set up full automatic timing, there are no fees, it starts promptly at 8 a.m. and the results are posted online shortly after the race.  That's a great way to kick off your weekend!

You're 42 years old, you set a race record, and your 5K time (15:07) in the St. Patrick's Day race was one of your fastest - not to mention one of the best times by any local runner - in years. Care to explain all of that?
All I can say is that there are times when you get more focused than others and you are able to channel all your energy into running.  This is one of those times for me.  I am learning that as long as the body can handle the work, age is not as limiting a factor as we seem to think it is.

There are many times during the year when other activities take precedence,  but once some semblance of fitness starts to show I find it very compelling to build on it.  I find that success breeds success and once I start training well, I start racing well, which motivates me train harder and more consistently.  And once I know what sort of form I am in I can gear my racing to culminate in some sort of goal.

Running has taken you around the world. What are your goals now?
During the Olympic years I would sit down with my coach at the beginning of the year, set the goals, and figure out the training and racing to reach those goals.

Now it's totally backwards!  I do some running, get a bit fitter, enter some races, see how they go and then set the goals.  Since I've now done a few races I plan to have a crack at the British Masters steeplechase record in Tennessee on June 4, and then run the World Masters championships in Sacramento in July.  Then I'll back off!

You competed in the steeple chase at the Olympic games in Atlanta (1996), Sydney (2000) and Athina, Greece (2004). What is your favorite Olympic memory?
The Olympics are so, so special that it's difficult to pick a single favorite Olympic memory.  The whole atmosphere, being part of history, being in the Olympic village, going to the exotic training camps, getting the best technical support all add to the experience.

However, getting engaged under the Olympic flame in Atlanta will always be a lasting memory.  Also seeing my son in the crowd while I was on the start line in Athens was very special.

Sydney is such a beautiful city and Australia is such a great sporting nation that 2000 was, in my opinion, the best Olympics I attended.  Atlanta will always be special because it was the first, and Athens because it was the birthplace of the modern Olympics, but Sydney just seemed to be the most ideally suited for the job!

What did you like about the steeple chase?
The steeplechase is just my event.  It requires agility, fitness, strength and guts.  I was never quick enough to be a contender in the middle distance races and don't seem to have the true endurance of a 5k/10k runner, but the combination of barriers, water jumps, and the 3000 meter distance just seems to work for me.

It's also a very exciting race to both be part of and watch.  A top level steeplechase involving the best African runners in the world is just an awesome spectacle.  So too is a minor college meet where during the latter stages of the race the competitors are barely able to get over the hurdles and the water jump offers some of the tail-enders the chance to showcase the swimming skills!

Where do you like to run in Colorado Springs and why?
For a nice run away from the city, I choose Waldo Canyon or Section 16.  If I'm looking for something a little flatter I like to run on Monument Valley.  For hill reps, I run in Bear Creek Park, and for the track it's got to be Cheyenne Mountain High School.  I'm not sure if there are any tracks I have run on in the world with such a superb backdrop as CMHS.