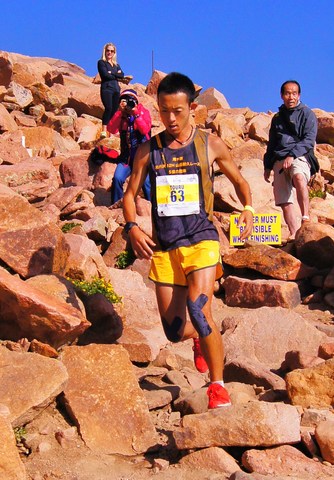 Touru Miyahara didn’t need an interpreter to express his joy after he won the Pikes Peak Marathon on Sunday. His beaming smile said it all.

Miyahara’s victory was in doubt, however, less than a mile from the finish line when Alex Nichols moved alongside him to create a dramatic conclusion.

“I caught him right as we hit Ruxton (Avenue), so with a half-mile to go, we were tied,” said Nichols, who finished second, matching his maiden effort in last year’s 26.2-mile race. “At first, I thought I had him, but he’d been conserving energy on the downhill and had too much left.”

Miyahara dug deep for extra strength and pulled away in the final 500 meters. It was an amazing finish, a rarity for a marathon to be decided in the stretch run after more than 25 grueling miles.

Jason Delaney, who finished third in 3:53:45, reached the summit first in 2:16:21. Miyahara was 82 seconds behind, with Nichols more than six minutes behind the leader. Nichols caught Delaney at Barr Camp, but still trailed Miyahara by three minutes, 18 seconds.

Nichols shaved another minute off his deficit by No Name Creek and steadily stalked Miyahara through the final miles.

“I knew (Nichols) was closing in,” Miyahara, who is from Japan, said through interpreter Robin Lawrentz, a friend who met him in Japan before moving back to Colorado Springs. “I was going as fast as I could.” 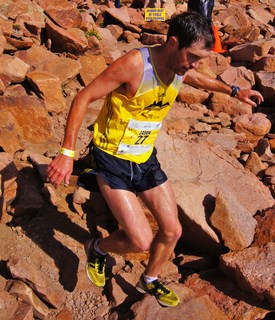 Despite the injury on the bottom of his right foot, and soreness in his legs, Miyahara figured he would prevail in his first effort on the mountain.

“I’m a road runner,” he said. “As long as I could race him on pavement, I thought I’d be champion.”
The 30-year-old Miyahara lives in Gotemba City, Japan, at the base of Mt. Fuji. He has won the Mt. Fuji race, an ascent, and is ranked No. 1 among Japanese trail runners.

“I’m not a good descender, so I was worried how I’d do in this race,” Miyahara said. “The long descent (was the hardest part). I’m very happy to do so well.”

The champion wanted to be the first to the summit, and was disappointed Delaney beat him to the top. Delaney won the Ascent in 2012 but this was his first marathon on the famous mountain.

“I was hoping for more, but I’m satisfied,” said Delaney, 33, who lives in Polson, Mont., and has two children with another on the way.

Delaney won the Missoula (Mont.) marathon about five weeks ago, setting a course record. His training was a little compromised, he said, since buying his parents’ landscaping business.

“I was hoping for a couple minutes faster on the ascent,” he said. “(Miyahara) caught me a couple miles after we started down. I tweaked an ankle but tried to gear it up. By the time Alex caught me, I was feeling the burn.” 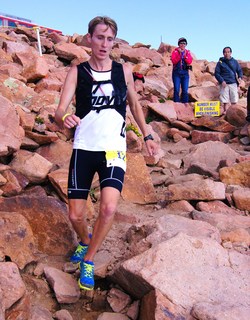 Nichols, 27, has spent years looking at Pikes Peak and was thoroughly disappointed not to win. The former Colorado College runner is an assistant coach for the school and works at Colorado Running Company.

“It’s definitely heartbreaking,” said Nichols, who was five minutes faster than a year ago. “I’m getting better every year, but I came to win. I don’t want to make excuses, but I had a cold this week. I had a headache on the uphill, and just didn’t run the uphill like I wanted to.”

When Delaney and Miyahara – both rookies in the race – broke from the pack and led the ascent, Nichols said he “just tried to run my own race. (Miyahara) wasn’t really on my radar.”

Both Nichols and Miyahara run in the Skyrunner World Series, a 10-year-old organization that features five races in five countries. The Pikes Peak Marathon is third in the series, with the Matterhorn Ultraks – four kilometers longer than a marathon – scheduled just six days later in Switzerland, on Aug. 24.

“I’ll skip that one,” said Nichols, who was 13th in the Skyrunner World Series standings after running in France, but not Spain. “I should move into the top five after this race.”

The fifth, and final, race in the series is Oct. 13 in Italy.

Both Nichols and Delaney said they’ll definitely challenge Pikes Peak, themselves and their competitors again in 2014. Miyahara wasn’t quite so sure.