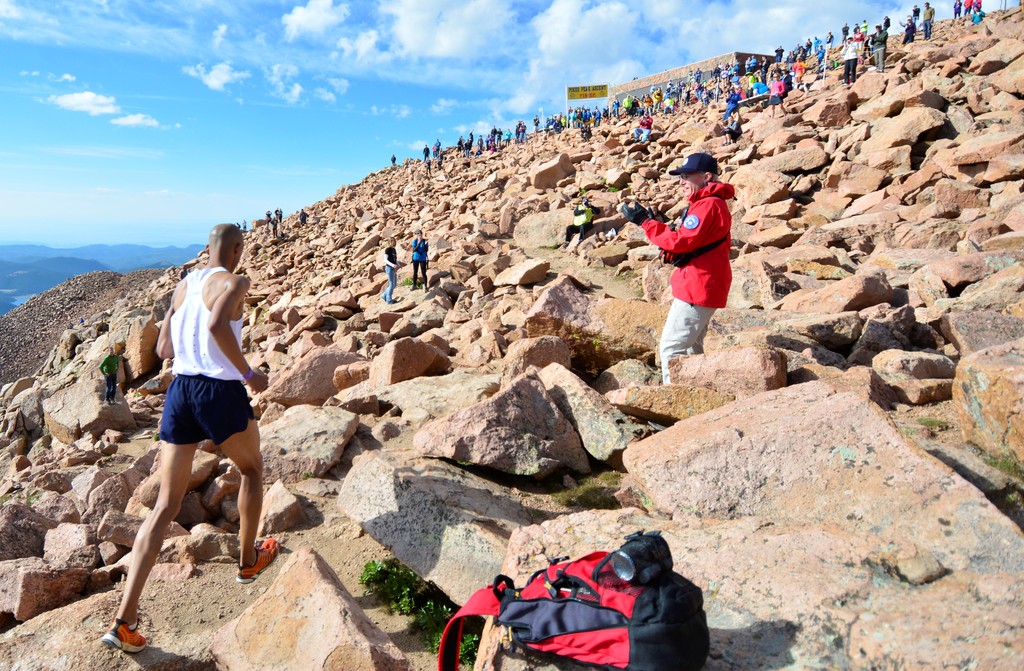 Joe Gray on his way to winning the 2017 Pikes Peak Ascent. (Photo by Bryan Oller)

It’s early springtime at the foot of Pikes Peak and mountain runners are building base miles and burning their legs on the hills in preparation for a year of racing.

But the new running season will take on a sense of urgency at 8 a.m. Saturday, March 10, as online registration begins for the Triple Crown of Running. Longtime participants know it’s “game on” when they enter these events, an historic series of races held on the Pikes Peak region’s world-famous running courses.

Here are the early headlines as the Pikes Peak Marathon office begins to simmer with activity. 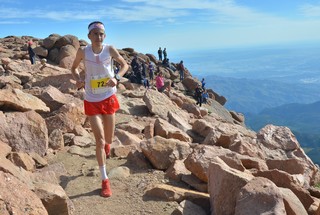 The Pikes Peak Marathon has always attracted the top mountain runners in the world. But the international field promises to be extraordinary this year as the marathon will be part of the new Salomon Golden Trail Series.

Men and women mountain runners will compete for a Top-10 position in the series and an invitation to the Grand Finale, the Otter Trail in South Africa.

The series begins on May 27th with the Zegama – Aizkorri Marathon in Spain. Next stop is the Mont Blanc Marathon in France on July 1, followed by Sierre-Zinal, Aug. 12, in Switzerland. The Pikes Peak Marathon takes the stage on Aug. 19, with Scotland’s Ring of Steall Skyrace (Sept. 15) representing the last chance for runners to secure an invitation to the Oct. 20 Grand Finale.

The race on “America’s Mountain” will enjoy an historic moment as it captures the attention of the global mountain-running community. “We are proud to have been chosen as one of the five prestigious international races for Salomon’s Golden Trail Series,” says Ron Ilgen, Pikes Peak Marathon, Inc. President. “It shows that the Pikes Peak Marathon continues to be one of the top mountain races in world.”

The series is already attracting high-caliber U.S. runners. Salomon reports that Max King, Sage Canaday, Dakota Jones and Megan Kimmel have indicated they’ll take on Pikes Peak, and its unforgiving climb to 14,115 feet elevation and back down. An impressive number of world-class international runners, including Salomon’s Emelie Forsberg, the 2012 Pikes Peak Marathon women’s champion, are scheduled to race as well.

The Top 10 after five races (runners must run in at least three) will advance to the finale in October, with each finalist invited to bring a friend or partner. The Grand Finale will also present the twenty athletes with the opportunity to support a cause of their choosing, and share about $123,000 in prize money.

Sticking to its commitment to clean sport, Salomon is promising strict drug testing at all series races.

Qualify with an ultra: New this year, runners may use their time in an ultra race (50K or longer after Jan. 1, 2016) to enter Pikes Peak. Finishing times that are faster than twice the overall winner’s time will work as a qualifier. New range to run at the Summer Roundup
Big changes are coming for the 2018 Summer Roundup. The second leg of the Triple Crown of Running will feature a trail half marathon at Cheyenne Mountain State Park. With a gorgeous circuit of foothills trails and an accommodating start/finish area, event organizers hope the race has found its forever home on the slopes and ridges below Cheyenne Mountain.

The new course hits the park’s high points (1,900 feet elevation gain,) sweeping gently through dark pine forests and rambling across rocky ridgelines. The trails are smooth and runnable, with a few sections of rock-hoping. The start and finish are located near the Limekiln Trailhead, which has space for 400 cars. Carpooling is encouraged.

“We’ve talked for a long time about doing something big with the Summer Roundup,” says race director Tim Bergsten. “Cheyenne Mountain State Park is a popular place to run, and it fits the profile of the Triple Crown and its history of great events on beautiful race courses. The half marathon will be a challenge, same as the Garden 10 and the Pikes Peak races, but doable by any reasonably fit runner.”

And at $40 (through May) the race is one of the most affordable half marathons on the race calendar. There is a 10K option ($30) for veterans and newcomers looking for a challenge.  Those using the Triple Crown as a Pikes Peak qualifier should be aware that the cutoff time for the Summer Roundup half marathon is 3 hours, 30 minutes.

“There is a special bond between the runners and this unique landscape we call home,” Bergsten said. “Our roots are in these foothills. Cheyenne Mountain State Park is a part of that connection. This is us.” Race organizers introduced a new course with a new finish line at Rock Ledge Ranch last year. Afterward, the verdict came quickly. Everyone loved the new format, the new course, and the Garden of the Gods Run Fest after party.

So we’re going to do it all again with some adjustments: Better traffic flow before the race, quicker pizza lines at the finish, and enough beer for everyone at the Run Fest.

“We think of this race as the ‘Perfect 10,’ and we’re working toward that,” Bergsten said. “There is no reason this event should not be one of the best – and most popular - road races in the game. The Garden of the Gods has been recognized as the top park in the country (by TripAdvisor,) we have an iconic course, and the finish at Rock Ledge Ranch with the barns, livestock, and beautiful grounds, is unique and fun.”

The Run Fest will bring running organizations and the outdoor community together to increase recognition and support for the Garden of the Gods Foundation, a nonprofit dedicated to enhancing and protecting the park. The Garden of the Gods was donated to the city in 1909.

We’ve attempted to contact the black bear that meandered into the middle of the race last year. We’ll let you know if he has plans for an encore performance.