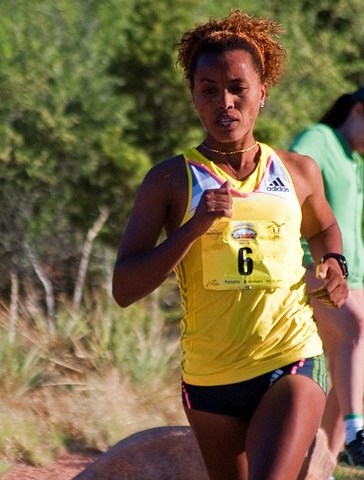 The Garden of the Gods Ten Mile Run is dry, high and hard according to Colorado Running Hall of Famer and a notoriously tough hill runner, Jon Sinclair. Yet, Belainesh Gebre has managed to set and reset the women’s course record each time she has run it - and this year was no different.

Gebre (at right) ran a blazing 58 minutes and 45 seconds on the hilly ten mile course nestled inside the Garden of the Gods. Gebre broke into the top 20 overall, won the women’s field by 2:28 and took down her previous course record by four seconds, set in 2009.

“The course is tough,” said Gebre, of Flagstaff, Ariz. “Especially the five mile, but I knew the (course).

“I enjoy this race because the people are too kind to me and the place is pretty. Every time I come here I’m so happy,” Gebre added.

“My body is a little tired,” she said. “The pace was a little fast, but I controlled my pace because my body was tired ... but the course is not fast-I just took lead in the beginning.”

Despite the tough course, many runners agreed that this year’s race had ideal racing conditions, which was good for athletes but bad for previous records.

Along with Gebre, Nuta Olaru, 42, of Longmont, who finished second for the women in 1:01:12, captured a couple of titles from her race Sunday. Being a Colorado resident and USATF member, Olaru earned the USATF Colorado 10 Mile Champion. Olaru also set the women’s overall master’s record and the 40-44 age-group record, which she set in 2011.

“I tried to stay with the first girl,” Olaru said. “But I couldn’t because she went too hard at the one mile and after that I kept my own pace. At two miles, I knew I was second.

“(This year) was my fastest time on the course,” she continued. “I was surprised.”

Capping off the top five for the women was Rachael Cuellar, 31, of Albuquerque-who finished fourth in 1:04:37, nearly six minutes faster than her fourth-place time of a year ago when she was 15 weeks pregnant. Army Cpt. Kelly Calway, 29, of Manitou Springs, was fifth in 1:05:42.

Among the master’s women, Connilee Walter, 40, of Colorado Springs, captured the title in 1:09:20, finishing 11th for the women overall.

“The women’s field went out really fast today,” said Walter. “Obviously, there’s a lot of competition out there.”

Despite the fast start, Walter was able to maintain control and race strong.

“I just kind of tried to hold steady,” she said. “I wasn’t feeling super punchy on the hills but I picked up a little speed on the recovery side of those.

Walters, who is competing in the Triple Crown of Running series, plans to double in the Pikes Peak Ascent and Marathon in August.

The Garden of the Gods 10 Mile Run is the first leg of the Triple Crown of Running series, which also includes the Summer Roundup 12K Trail Run in July and the Pikes Peak Ascent and Marathon in August.