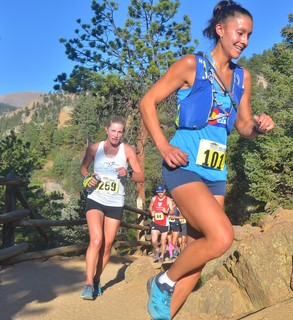 Dunking both feet in a 5-gallon ice bucket and eating a pint of Snickerdoodle ice cream has become the nightly habit for Tina Mascarenas.

She does the former because her ankles were hurt in a fall during a race on Mount Olympus in Greece in late June, and the latter because she craves ice cream about as much as she loves science and running.

Mascarenes has a lot going on these days. She just started a new job with DNA Connections, putting to use the biochemistry degree she earned at UCCS. And she’s getting married Sept. 9. In between those life-changing events she’ll defend her championship at the Pikes Peak Marathon on Aug. 19.

She didn’t expect to win last year, although she’d finished third in 2016.

“I thought I was competing for top five,” she said. “I think I had the best day of my life.”

It will take an even better day to win this year. The 29-year-old Doherty High graduate says a repeat victory isn’t realistic with the world-class Salomon runners who are part of the Golden Trail Series competing this year and insists that her goal is to finish in the top 10.

“The ladies who are coming are insanely fast,” she said. “They’ve done (Pikes Peak) and they’ve beaten my time by over 10 minutes.”

Still, Mascarenas was 23 minutes slower than the longstanding women’s record on America’s Mountain of 4:15:18 set in 1981 by Lynn Bjorklund.

Mascarenas, who isn’t as strong on the uphill portion, figures to be chasing the likes of two former Pikes Peak Marathon champions, Emelie Forsberg of Sweden, and Stevie Kremer of Crested Butte, who narrowly missed the women's course record in 2013, plus former Pikes Peak Ascent champion Megan Kimmel of Carbondale, and several other experienced European mountain runners who are part of the Golden Trail Series and the Salomon team.

“Compared to what they’re used to, Pikes Peak is extremely runnable, so I think they’re going to be fast,” Mascarenas said. “What I want is a (personal record) for me.” 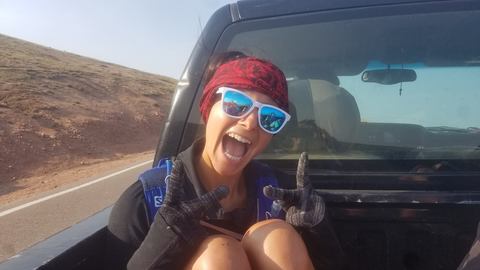 Her fiancé, Eric Oberlander, figures she can win again, but he’s just a bit biased.

“I know how competitive she is and she has a drive to get better,” he said. “She’s always finding better foods to assist in her running.”

She has a self-proclaimed Type A personality, which is confirmed by Oberlander and her older brother Jesse, who got her into running four years ago. When she scoffed at his 13-minute mile above the tree line on Pikes Peak, he bet she couldn’t do it. If she couldn’t, according to the bet, she had to quit smoking her usual 15-20 cigarettes a day.

She qualified for the Pikes Peak Ascent by running the Triple Crown series but her best mile near the summit was about 17 minutes. She slowly stopped smoking, and quickly replaced that habit with running. Like Forrest Gump, she now can’t seem to stop.

She averages 60 miles a week, often goes 70 or 80 and topped out at 100, though much of that was on the Peak and wore her down. Still, she finished sixth in the Olympus Marathon in Greece despite her fall on the downhill.

A gymnast from age 8 to 15, she’s a skilled athlete from a competitive family. Her sister Megan, 20, has won three climbing World Cups and her sister Alexis, 25, has reached the semifinals. Jesse is her running partner along with his longtime friend, Mike Martinez, and can still beat her, though not by a lot.

“Tina’s tough, she’s got that grit,” Jesse said. “Diet, training, she’s always tweaking something and finding out what works for her. She’s really passionate and has that addictive personality. If she’s in, she’s in 100 percent. When she did gymnastics, she was training 30 hours a week in the gym and taking an ambulance ride once a month. Now it’s like that with her running schedule; she can tell you where and what she’s running next month on a Tuesday.” She recently won the Barr Trail Mountain Race but was conservative on the downhill, protecting her left ankle.

Mascarenas figures she has at least seven years left to run competitively and increase her ability. She’d like to qualify for the U.S. Trail Running team and compete in the European series.

“I don’t feel like I’m at the level where I can let running dictate my life yet,” she said. “Maybe one day, if I can figure out my uphill running, if I can be a stronger runner, then it would be worth traveling and trying to be competitive in more international races.”

Next year, she wants to do better in local races and “smash all my times in races I’ve previously done.”

Her and Eric have enjoyed a few trips around the United States, and now to Greece, as she competes.

“Travel and adventure are what we want,” she said. “I use races as an excuse to go to awesome places, like Greece. I said I’d signed up for that race and he said, ‘Shucks, I have to go get Euros.’ I’d like to pick one a year, like Thailand next year, and they have really good rock climbing too. I try to pick a place that has both. Climbing is Eric’s main jam.”

They met six years ago at a rock climbing gym, back before Mascarenas even thought about running competitively. Now, besides the new job and the impending nuptials, America’s Mountain dominates her thoughts.