Canaday wanted a piece of Pikes Peak ... and he got it 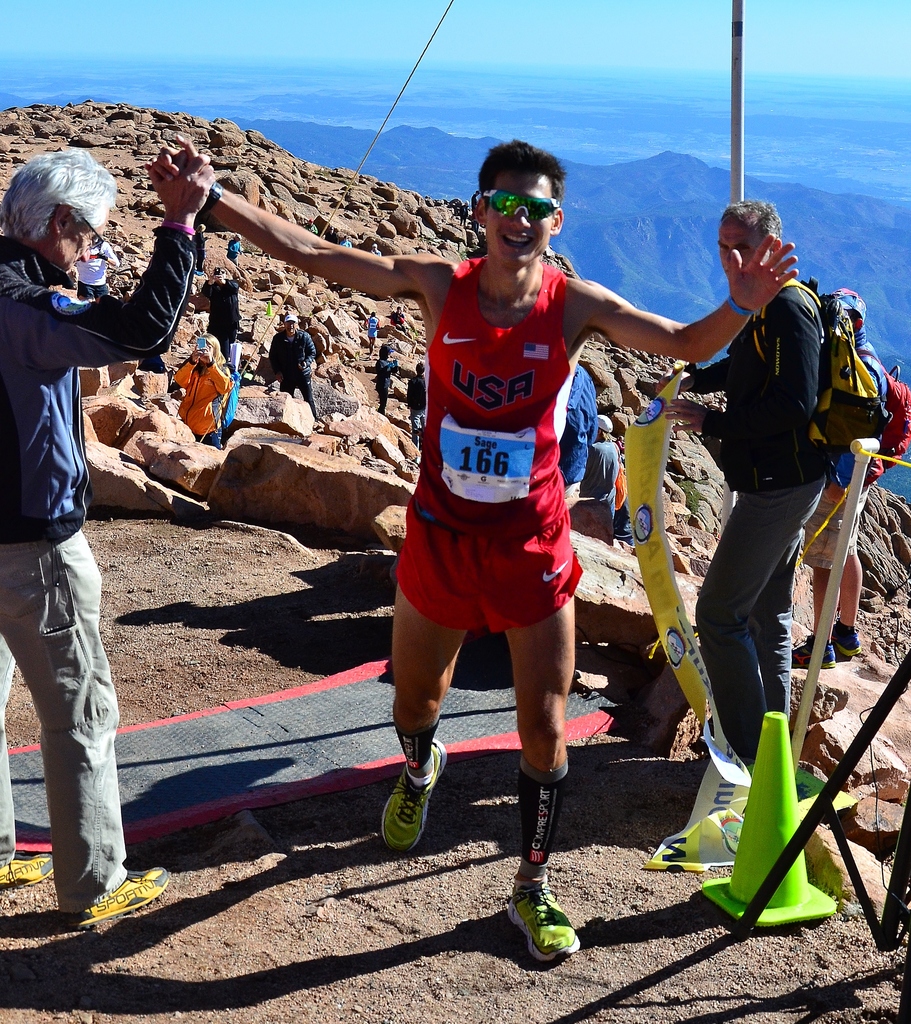 By Garry Herrington
PikesPeakSports.us
Two years is a long time to stew over a bad race. But that’s how long Sage Canaday had been waiting to redeem himself for what he called a poor debut performance at the Pikes Peak Ascent in 2012, when he finished a distant fourth in a time of 2:21:16 – not the result one of the nation’s top mountain runners had hoped for.

“I was literally crawling up the rocks,” Canaday, recalled of that race. “I had just moved (to Boulder) from Michigan and I was not adjusted to the altitude.” He nearly collapsed at the finish line. “I’ve had a chip on my shoulder ever since that race.”

Canaday, 28, won in a time of 2:10:03, followed by Teklay in 2:10:47. Canaday led Team USA to a decisive victory in the World Mountain Running Association’s Long-Distance Challenge, which Pikes Peak hosted for the third time in its history. With Wacker holding on for third in 2:11:39 and defending Ascent champion Eric Blake of West Hartford, CT, finishing fourth in 2:12:15, the United States won the team title with just 8 points and a combined time for its first three finishers of 6:33:58.

It was an impressive victory for the U.S. team on what is known as America’s Mountain. “It just shows the depth of our team,” said Canaday. “It’s an honor to wear the red, white and blue and it was very exciting for us to do so well on America’s Mountain.”

For much of the race, it appeared that Wacker would be the one leading the American title wave. Taking the lead from the start in downtown Manitou Springs, he was the first runner into the woods at Barr Trail and held the lead until the final mile of the 13.32-mile race, which climbs more than 7,800 feet to the 14,115-foot summit of Pikes Peak.

“I’m a road racer,” Wacker explained of his early strategy, “so it was not too difficult for me to run the first part so quickly. To be honest, I thought I would be caught by Barr Camp (at roughly the halfway point), but when I was still in the lead at ten miles, I thought I might be able to hold on.

Traversing the switchbacks high up on the broad east wall of Pikes Peak, he could see Teklay closing on him, and Canady not far behind. “Once I saw them coming, I knew they would catch me,” said Wacker, competing on Pikes Peak for the first time. “I wanted to hold on and win, but I misjudged it by a tiny bit. This was my first time representing the U.S., and I just wanted to make sure we won the team title.”

Faltering in the final mile, Wacker was first passed by Teklay, the 35-year-old African, who was the only one to keep the leader in sight prior to the field breaking treeline with about three miles to go. Then Canaday caught them both.

Teklay, a 35-year-old soldier in the Eritrean army, said he was surprised to see Canaday pass him in the final half mile. “I was very confident that I was going to win from the third kilometer on, because I know I can run well at altitude,” said Teklay, who lives in the capital of Asmara, which sits at 7,600 feet in the Eritrean Highlands. “But the altitude (here) was too much. I have never raced this high before.”

It was the fourth time in the past five years that Teklay has had to settle for a silver medal at a WMRA World Championship event.

For Canaday, it was his first world title. He settled into a pack of three Americans – along with Blake and Joe Gray of Colorado Springs – during the middle part of the race, unsure of the gap that Wacker and Teklay had created. “We were asking people how far ahead they were, but we kept getting conflicting information,” Canaday said of their inquiries of hikers along the trail. “I knew I probably wouldn’t be in the lead at Barr Camp, but I knew I could probably close any gap that (confronted him) about treeline.”

But, he said, when he broke treeline just above A-Frame with about three miles to go, he was “a bit discouraged” to see the Eritrean well ahead of him, and Wacker still out of sight. “I thought maybe I would have to settle for second or third,” Canaday said, “but I just put my head down and was fortunate that the fast early pace caught up to (the leaders).”

Catching Wacker, and then Teklay, as they ascended the famed 16 Golden Stairs just below the summit, Canaday said he “let loose” with a surge that put more than thirty seconds on the Eritrean. “I didn’t want it to come down to a sprint,” he said.

Blake, whose time was a minute faster than his winning time from a year ago, said he and Gray were unable to go with Canaday when he made his move. “When we got above treeline, Sage made a surge,” Blake said. “Me and Joe couldn’t go with him. It was a tough battle for me. I was really hurting that last mile.”

Gray, who was fifth in 2:13:02, admitted to being a bit tired from last Sunday’s second-place finish at the famed Sierre-Zinal 31K race in the Swiss Alps, said he was satisfied with his fifth-place effort considering the circumstances. “I knew I was a little bit down after last weekend, but I just wanted to help my teammates as best I could so we could seal the deal for the gold medal,” said Gray, who will lead the U.S. men into the WMRA World Championships next month in Italy. “I’m very happy for that.”

Tommaso Vaccina of Italy placed sixth in 2:13:59, with Jason Delaney of Polson, MT – the 2012 Ascent champion – seventh in 2:16:17, and Xavier Chevrier of Italy eighth in 2:17:08. Delaney is also planning to compete in Sunday’s Pikes Peak Marathon, when runners will return from the summit to finish in Manitou Springs.

Mitja Kosovelj of Slovenia, the winner of last year’s WMRA World Long-Distance Challenge in Poland, was 17th in 2:24:58.

The 2015 WMRA World Long-Distance Challenge will be the Zermatt Marathon next July 4 in Switzerland. … One runner, Kendrick Callaway, 30, didn’t stick around long after the finish – he headed straight to the town of Twin Lakes, where he will pace Dave Mackey of Boulder for the final 40 miles of the Leadville 100, which began Saturday morning. Callaway, a rock climber who has been living in his car for the past two years enjoying his “first retirement,” finished 89th overall in a respectable time of 2:58:50. … A total of 1754 runners started Saturday’s race.