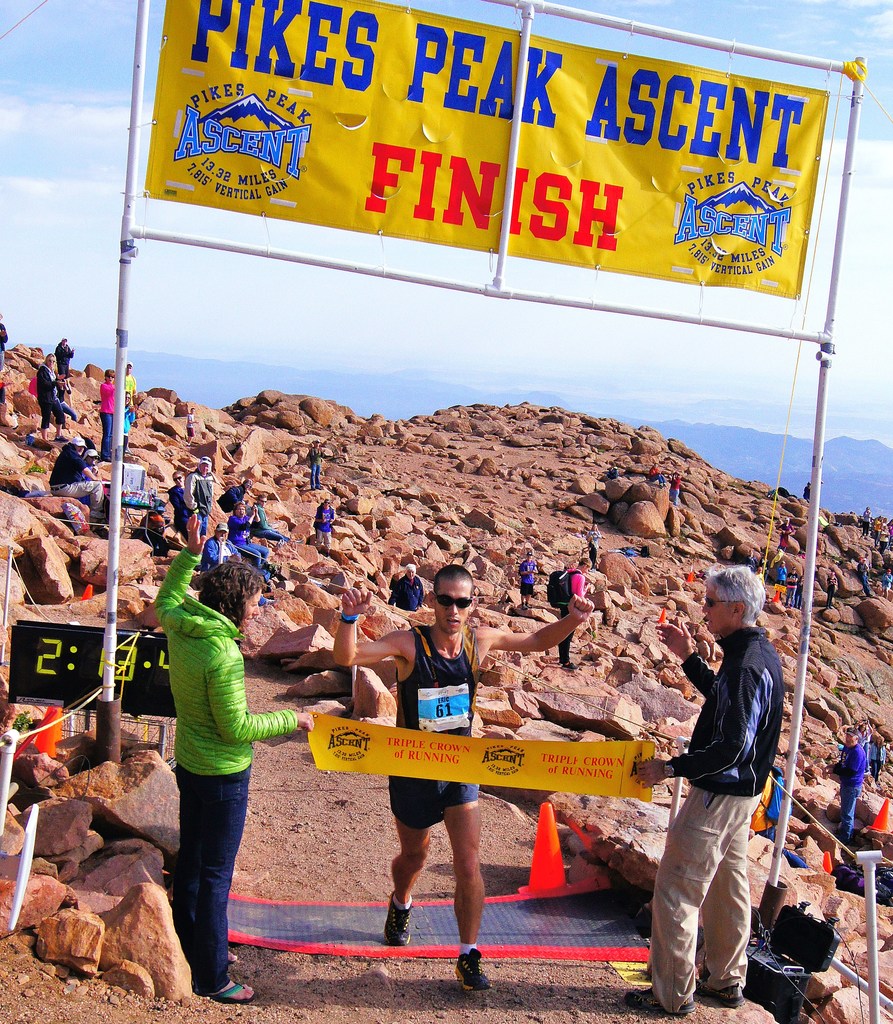 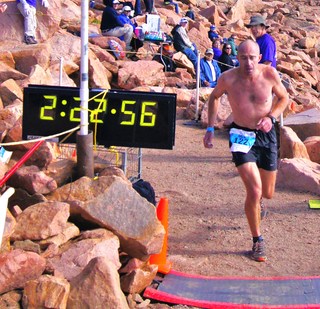 By Lindsey Grewe
PikesPeakSports.us
For three years, whenever Eric Blake’s mind wandered to the Pikes Peak Ascent, he couldn’t shake the bad memories.

A top-five finish was tantalizingly close in 2010, right there for the taking.  Then one wrong step cost him everything.

In Blake’s first crack at the mountain in 2010, he and few other runners took a wrong turn and veered off course. The minutes lost cost him about 20 places.

“That was definitely part of the motivation,” Blake said about coming back.  “I was so disappointed that year…every time I thought about that year I got disappointed.

“I don’t know if I was in the type of shape to win [that year], but I think I would have been up there, top five.”

On Saturday, three years after that disheartening experience, 34-year-old Blake exorcised his Pikes Peak demons, running a perfectly executed race from start to finish.  He took the lead within the first couple of miles and never looked back, crossing the finish line in 2:13:45—almost 10 minutes ahead of second place.

Despite his convincing victory, Blake said he didn’t know he had the win until the final minutes.

“I pulled into the lead, then the next two plus hours I was running alone.  I didn’t know I had it until the last mile or so.”

Despite an accomplished mountain running resume — he’s a six-time member of the U.S. Mountain Running Team and the 2013 winner of the prestigious Mount Washington Road Race — Blake said it was an honor to become part of the storied history of such a famous event.

“Guys like Matt Carpenter, guys like Simon Gutierrez … I know the history of this race and it’s nice to put myself in the winner’s circle with those guys.” 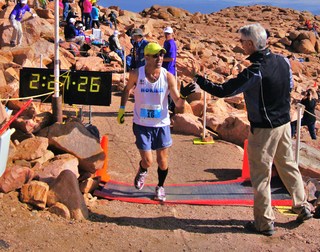 This newest addition to the winner’s circle, it should be added, lives at sea level.  Blake lives in Connecticut, where the nearest mountains are no taller than the elevation of Manitou Springs itself.
Gutierrez, a three-time Pikes Peak Ascent champ, finished third Saturday, improving on last year’s sixth place finish.  When the gun went off in Manitou, Gutierrez shot to the front, at one point leading the other runners by 100 meters.

“I started out good, running at 2:12 pace at Barr Camp,” he said.  “It felt comfortable, so I was getting excited.  Then I struggled … got slow after the A Frame.”

He ran in second place until the final three miles.

“One guy (eventual second-place finisher Greg Ruckman) caught me and I had nothing left,” he said with a smile. “But I’m happy with a top place!”

Gutierrez holds the age group record for men 35-39, but said he’s not too concerned with breaking future age group records — the 47-year-old is still too focused on being a Top-10 finisher, which he consistently is every year.

“I’m going to do this as long as they let me, as long as my legs will bring me back!”

Unlike Blake and Gutierrez, Saturday’s second place finisher had never competed in the Pikes Peak Ascent before.  Not knowing what to expect, 39-year-old Greg Ruckman said he was running scared. 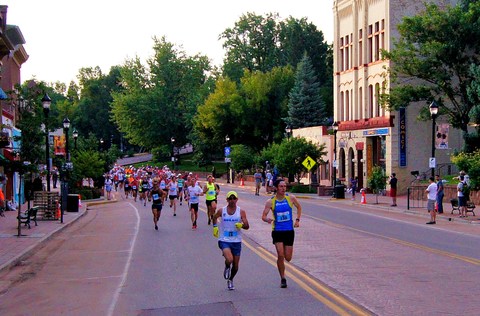 “I went as slow as I dared,” he said when asked about his race plan.  “I was super conservative.”

After submitting his race entry, Ruckman guessed he’d finish 14th based on the start list.  But halfway through the race, he found himself in sixth place.

“One by one, people ahead of me were done,” Ruckman said.

He began picking off runners one by one, ending up in third place after he hit the timberline. With three miles to go, he made his final move, passing Gutierrez and moving into second place.

When he crossed the finish line in 2:22:57, he had smashed every expectation he had for that race. Expect to see Ruckman take another stab in the future—but don’t expect to see him run back down.

“I am absolutely going to do this race again, but never the Pikes Peak Marathon,” he said with a laugh.

Saturday’s race wasn’t just a triumph for the winners, but a triumph for the city of Manitou Springs itself. One week after a flash flood devastated the community, runners took their marks under one of the first blue-sky days in weeks, on a street cleared by the hundreds of volunteers who had worked tirelessly over the past seven days to clean up flood damage.

The mayor addressed the crowd before the start, remarking that while “we’ve been through a lot … Manitou Springs is still open for business!”

Runners then charged up Manitou Avenue towards the Barr Trail, ready to get the 32nd annual Pikes Peak Ascent underway. The 13.32 mile race from Manitou Avenue to the 14,115-foot summit of Pikes Peak was the first major event following the flood, and the perfect event to showcase the community’s resolve - sure, there’s a little bit of an uphill battle, but you’ll eventually get to the top. You’ll survive. You’ll be amazed you got through it — and you'll be stronger for it.